THIS STORY HAS BEEN FORMATTED FOR EASY PRINTING
Television Reviews 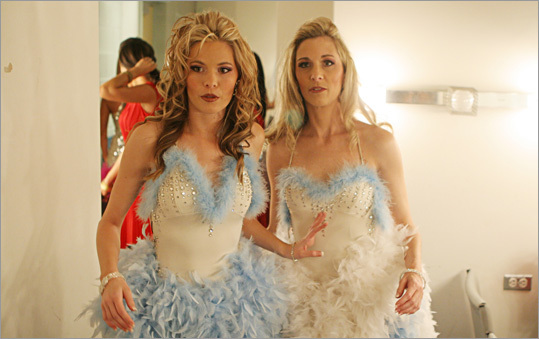 Rachelle (left) and Mindy are among the 11 mother-daughter pairs competing in "Crowned: The Mother of All Pageants." (The CW / Michael Desmond )
Email|Print| Text size – + By Joanna Weiss Globe Staff / December 12, 2007

There's no reality-show figure quite so odious, these days, as the mother who tries to upstage her kids. Kris Jenner plays the role in "Keeping Up With the Kardashians," the creepy-but-popular E! series about a wannabe star and her manager mom. And countless other women seem to be auditioning for the part - a testament to the combined powers of vanity, obscurity, the camera, and the midlife crisis.

Why else would anyone sign up to be one of the mothers on "Crowned: The Mother of all Pageants," the CW's newest reality contest? In this unintentionally sad little contest, which premieres at 9 tonight, 11 mother-daughter pairs converge on a mansion to compete in a beauty pageant with a $100,000 prize. There's the expected cattiness, the waving of French manicures, and a weekly ritual elimination: Each week, a losing team must take a pair of scissors and cut off their beauty-pageant sashes.

Maybe it's appropriate that they do this work themselves: "Crowned" seems a likely harbinger of the fast-and-cheap reality shows that are about to flood the airwaves, if the writers' strike persists. This one feels tacked together with cardboard and masking tape - which is precisely the look of the set in a dusty theater called the Madrid, where the preliminary contests take place.

In tonight's case, it's an odd and unspecific task. The pairs are asked to give themselves names, choose a pair of matching costumes, and put together a little routine that conveys a "first impression." It's a way of introducing the contestants to the viewers - though the casting, it turns out, doesn't stretch creative boundaries.

Some of these pairs have years of pageant experience: They're primped daughters and their controlling mothers, willing partners in vanity. Witness the team that calls themselves the "Reigning A's." Andrea, 43, tells her daughter Amanda, 24, that they're here, not to make friends, but to do laps around the patio in order to one-up the competition. (She's great at instilling values; on the CW website, Amanda lists her hobbies as "shopping and working out.")

Others have overcome obstacles but still are suspect: One mother keeps repeating that she just got a new kidney. A few, meanwhile, are lovable underdogs. We're clearly meant to root for Gina, 49, and Hollis, 27, two Texans who aren't classic pageant beauties, but are awfully gosh-darned nice.

You can see where this is going: Evil moms will get comeuppance and drag their daughters down. The judges - former Miss USA Shanna Moakler, talk-show host Cynthia Garrett, and Carson Kressley from Bravo's "Queer Eye" - seem to be on a mission to impart some more life lessons. They chastise one pair for naming themselves the "Sassy Sisters," suggesting that mothers ought to be more mature. This advice comes too late for most. "We are exactly alike!" declares Heather, 24, of her mother, Brenda, 42; they're an eerily similar pair of West Virginians who are veterans on the pageant circuit.

That's about as distinctive as the personalities get, so Kressley makes his best effort to add some verve. "Your outfits make my eyes bleed!" he says cheerfully to one pair, decked in sequins. Still, sometimes he can't help but cross over into mean. In tonight's episode, he sneers that one pair of contestants look like "Amish hookers."

The commentary isn't really necessary; the contestants provide more than enough entertainment at their own expense. One pair names themselves "Blonde Bombshells," declaring that this will convey the idea that they're "intelligent and smart." Another chooses the name "Silent But Deadly," unaware that this is a reference to a particular bodily function.

And so it goes - amusing, but always a little too easy. The same will clearly be true of the mothers featured on "Party Mamas," another new mothers-behaving-badly series that premieres tonight at 10 on WE. A spiritual cousin of MTV's "My Super Sweet 16," it focuses on mothers who throw over-the-top parties for their children, which are really intended to be showcases for themselves. Lisa, the mother in tonight's premiere, declares off the bat that her goal is to be famous. If she were already inclined to humiliate herself, the cameras seem to goad her even further.

Lisa's chief goal, as she plans an over-the-top bar mitzvah for her son Mitchell, is to make sure the man of the hour doesn't upstage his mother. This is a difficult task, since Mitchell has been working with an urban dance group on an elaborate showcase of hip-hop choreography. So Lisa hires a songwriter to compose an ode to her son, which she will sing and dance. That she can't carry a tune will be no obstacle.

This is supposed to be fun to watch, and it is, a little; disgusting excess always has its moments. But listening to a tone-deaf person trying to sing doesn't make for long-term pleasant entertainment. Nor is watching a woman whose urge for the spotlight outshines her sense of shame. You could laugh at her, but a part of you wants to hand her a pair of scissors and ask her to cut off the microphone cord - for her sake, and for yours.

Joanna Weiss can be reached at weiss@globe.com. For more on TV, go to viewerdiscretion.net

Crowned: The Mother of All Pageants