Unbowed, Buddy Cianci is back loud and clear 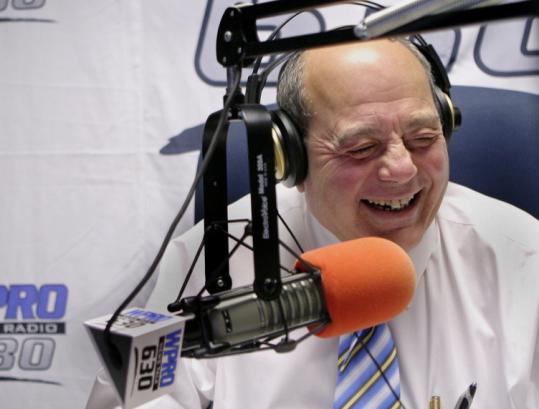 PROVIDENCE - Just after 10 o'clock on a rainy Tuesday morning, the star of the Buddy Cianci Show leans into the microphone and grins.

The morning paper has a story that a top mayoral aide is leaving City Hall to run a state finance watchdog group, a move Cianci brags he reported the previous week. Another scoop! And the aide is one of Cianci's favorite targets.

"Don't forget, we got him to register his car in Providence; he had this big Mercedes that was registered in Massachusetts," Cianci crows. And the aide's salary, he tells his listeners, may have been subsidized by corporations that had gotten fat property tax breaks from the city. "We don't know where the dough to pay [him] comes from."

Recently released from federal prison, the legendary former mayor of Providence is back - with a vengeance.

Smiling from the cover of Rhode Island Monthly magazine, chatting on local TV, speaking before civic groups, and holding forth on his daily radio talk show on WPRO (630 AM), Vincent A. Cianci is almost as omnipresent as he used to be when he was running City Hall. And, unchastened by his disgraced exit from office, he is increasingly using his radio show to question the ethics of the popular and politically ambitious mayor who succeeded him, David N. Cicilline.

Cianci's needling is providing a richly ironic plot for the citizens of Providence, where the flashy and voluble former mayor presided over an administration "rife with corruption at all levels," according to the judge who sentenced him to prison in 2002. After a four-year federal investigation nicknamed Operation Plunder Dome, Cianci was charged with a dozen racketeering influenced and corrupt organization counts including bribery, extortion, and mail fraud; Cianci's top aide was caught on tape accepting bribes. Cianci, who maintained his innocence, was acquitted of all the charges except for a single count of racketeering conspiracy.

While Cianci was serving his 4 1/2 years in federal prison at Fort Dix, N.J., Cicilline replaced him, elected on a platform of restoring honesty and sound ethics to city government. A warm, Brown University-educated former defense lawyer who is expected to run for governor next year, Cicilline is widely seen as having made good on that promise. Cicilline, who is Jewish, Italian-American, and openly gay, has also projected a commitment to a new openness and diversity in a city with a reputation for being provincial and clannish.

"I don't say he's doing a bad job," Cianci insisted in an interview after his show the other day.

Except, he said, that police morale is low. And Cicilline is taking campaign money from city vendors and employees. ("You don't have to even bother checking, trust me," said Cianci, who was never shy about vacuuming hundreds of thousands of dollars a year in campaign contributions from those sources.) Also, the mayor has larded the City Hall payroll by appointing a "director of protocol."

Cianci said he does not see hypocrisy in his critiques of the current mayor. He considers himself an entertainer and a truth-teller who believes he can play a "very constructive" role in the public discourse.

"Nobody's ever connected the dots," he said, referring to his scrutiny of the Cicilline administration.

But Ron St. Pierre, a longtime broadcaster who plays Cianci's straight man on the radio show, says that Cicilline and other critics gleefully berated Cianci and his record when the former mayor was "away."

Cicilline, 46, has mostly ignored his predecessor. For the record, the mayor's office said all of Cianci's allegations about the mayor and his staff are "completely unfounded." In particular, it said, the director of payroll handles the work of three Cianci administration appointees, Cicilline has never accepted campaign contributions from city workers or vendors, a first in the city's history, and an anonymous donation that temporarily subsidized a respected aide's salary was first approved by a "highly respected" committee.

"I am incredibly proud of the work we have done over the last five years and the things we've accomplished," Cicilline said in a phone interview.

The mayor said he has never listened to Cianci's show because he is too busy with his job.

But that is not true of everyone who works at City Hall.

"I can tell you, if you walk through the halls, you can listen to the show without missing a sentence," said one veteran City Hall employee who refused to give his name. He said he liked Cicilline but could not resist tuning in to Cianci. "Three-quarters of the building listens to the show. I love it. He's got people in the building telling him what's going on around here."

Cianci, 66, says he has no interest in running again for any public office, and he is well aware that a state law prohibits him, as a felon, from running for state office until 2012, or three years after the end of his supervised release.

Still, he could be a factor in Cicilline's political career, said Maureen Moakley, a political science professor at the University of Rhode Island who believes Cianci feels "embittered because he feels as if he got a raw deal" in his conviction and sentencing. If Cianci turns even a small group of devoted followers against Cicilline, it could have a "tremendous effect" in a multicandidate gubernatorial primary, she said.

Cianci, however, does not come across as bitter. He looks as though he means it when he says this is the happiest time in his life - not only, he says, because he is no longer eating prison food and being counted by guards every couple of hours, but also because his hometown has welcomed him back so warmly. He thinks the reception has to do with his role in dramatically rehabilitating the city's downtown, and his years of attending all manner of events around town.

"Plus, I think people respect you in the way you handle adversity," he said.

His show is certainly not all about Cicilline, either. Last week, he could be heard lamenting the ever-earlier marketing of Christmas, jeering at the disappointing circulation numbers of his nemesis, the Providence Journal, and grilling the mayor of Cranston on whether he would support requiring police officers to undergo regular physical fitness testing as they age.

Some of these officers, Cianci said, "could be on the Olympic rigatoni-eating team."

Since he left for prison, his appearance has changed a bit - he has cast aside his toupee, what he called "the squirrel," and dropped 35 pounds. But his style remains the same.

He arrives at the radio station each morning in a Lincoln Town Car, driven by his chauffeur. Cianci also employs an accountant and an executive assistant, also paid out of his pocket. He keeps a pack of Marlboro Reds in his shirt pocket, and ducks outside the building during commercial breaks for a smoke.

An incorrigible name-dropper, he casually mentioned a dinner he attended recently at the home of Matt Lauer where the guest list included Jack Welch, Katie Couric, and Jerry Seinfeld; a bit later, he noted that Liza Minnelli would be coming to town to perform soon.

"I had the pleasure of going to her wedding in New York; it didn't last long," Cianci said. "I mean the wedding lasted a long time, but not the marriage."

He's not afraid of turning that same caustic wit against himself and his own racketeering conviction. One of the fictional characters on his radio show is "RICO," a dog with a pretty tough growl.

(Correction: Because of a reporting error, a story about former Providence mayor Buddy Cianci on Page One last Tuesday gave an incorrect year in which the current mayor, David N. Cicilline, is a likely candidate for governor of Rhode Island. The state's next gubernatorial election will be held in 2010.)