Already well known within the comedy industry, Burr could be the next breakout artist from Emerson. According to Doug Herzog, president of the Comedy Central TV network, Comedy Central officials have discussed vehicles for his humor on several occasions.

"Emerson was probably the first place I went to where I was able to get better at the thing I wanted to do," Burr said in an interview. "It gave me the sense I was going to be all right in this business. There are so many people in the business - not just comedians, but writers, actors, producers, directors, creators of shows - and they were all doing well . . . It makes it really tangible."

At left, Burr hosts a show on Emerson's WERS. 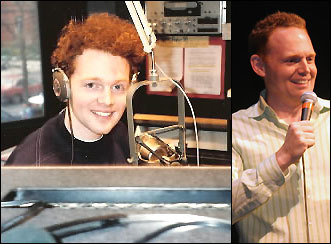