Winkler graduated from Emerson and earned a master's of fine arts from Yale in 1970. In 1974, he was cast in the film "The Lords of Flatbush," and that same year he won the part of Arthur "Fonzie" Fonzarelli in the hit television series "Happy Days." He remained in the role until the show's cancellation in 1984, becoming an iconic figure in American television. Today he coauthors a series of books about a dyslexic boy named Hank Zipzer.

At left, Winkler as the title character in Ibsen's "Peer Gynt." 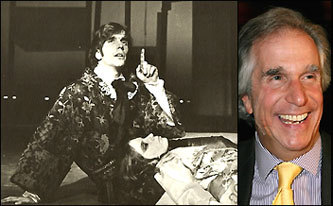