Kirsten Greenidge, a local playwright, turns to her family’s past for a world premiere at the Huntington Theatre 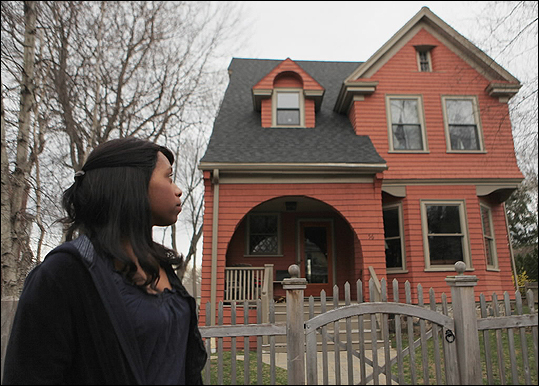 Two couples get together for drinks in the South End, and the talk turns to real estate. It’s the late 1950s, and one pair, black and affluent, has a proposal for the other two, who are white, working-class, and in financial straits. We’ll pay you, the Taylors tell the Donovans, if you’ll buy the house we want in your suburb and sign it over to us.

That is the catalyzing event in “The Luck of the Irish,’’ a new drama by Medford playwright Kirsten Greenidge that has its world-premiere production starting Friday at the Huntington Theatre Company. The details of the play are artistic inventions, but Greenidge’s inspiration was her own family history: the stratagem her grandparents, Ariel and Samuel Dance, used as a black couple to buy a house in overwhelmingly white Arlington in 1967.

Greenidge’s family used the term “ghost buying’’ to describe the tactic, the playwright says over tea in the South End, not far from where her grandparents used to live. A widely produced former Huntington Playwriting Fellow whose works include “Milk Like Sugar’’ and “Bossa Nova,’’ Greenidge is interested in what she has called “the crevice of history’’ - and the swaths of the past that are hidden in it. But the territory she explores in “The Luck of the Irish’’ is so little known that she feared her play’s central circumstance would be dismissed as an “isolated incident’’ with “no bearing on history,’’ she says.

Across the country, in fact, Greenidge’s grandparents had a lot of company. Black buyers from the 1940s to the 1960s frequently used “straw buyers or some sort of other subterfuge’’ to get around a system stacked against them, according to Andrew Wiese, the author of “Places of Their Own: African American Suburbanization in the Twentieth Century.’’

“It was relatively common,’’ says Wiese, a professor of urban history at San Diego State University. “The number of African-Americans who pioneered to white neighborhoods was relatively small, but among them, the practice of having to circumvent the real estate industry at the time was usually a necessity.’’

Samuel Dance, a quiet man who spent nearly two decades in the Navy before becoming a maintenance worker at the Veterans Administration in Jamaica Plain, and Ariel Dance, an administrative assistant at Massachusetts General Hospital, had tried to buy before in the suburbs: a house in Newton that suddenly became unavailable, recalls their daughter, Ariel D. Greenidge, the playwright’s mother.

“They wanted us to have a yard and garden and trees,’’ she says, and they wanted their three children to go to better schools than they would in Boston, where the family owned their home in the South End. “Education was tops. Everything was about education, educating their children.’’

So they moved to Arlington first as renters, in the 1950s, becoming one of the town’s few black families. A decade or so later, when Ariel Dance spotted a house for sale on Claremont Avenue, she went on her own to see it, prepared to say, if anyone questioned her presence, that she was someone’s maid, her daughter says.

And when Ariel Dance knew she wanted the house, she asked a white friend from the South End to help her by pretending to be the buyer. They kept up the masquerade with the owners and the real estate agents, while the Dances got a VA-backed mortgage from a Cambridge lender known for granting loans to the city’s West Indian population. “It was a secret up till they went to closing,’’ says Ariel Greenidge, a social worker who lives in Beverly.

At the time, she adds, it was not uncommon for black families in white suburbs to move into their new homes in the middle of the night. “My parents didn’t do that,’’ she says. “They moved in in the daytime.’’

Kirsten Greenidge, who grew up in Arlington, set “The Luck of the Irish’’ in the fictional Boston suburb of Bellington, Mass.: “a rendering of Arlington,’’ she calls it. The action toggles between the early 2000s, when one of the ghost-buying Donovans asserts ownership of the house, and the late 1950s.

By that time in Massachusetts, housing discrimination on the basis of race or ethnicity - like the kind New York Mayor Michael Bloomberg’s parents sidestepped in Medford in 1945 by having their lawyer buy the house they wanted and sell it to them - was illegal. Enforcement was another matter.

“It’s illegal to speed, too,’’ says Darnell Williams, president and chief executive of the Urban League of Eastern Massachusetts, bursting into laughter at the notion that the law alone would alter behavior.

The obstacles for black buyers of the era, Wiese says, could include banks that wouldn’t lend, real estate agents who wouldn’t disclose listings or show houses, and white owners who would refuse to sell. Those who did buy a home might face neighbors who would form a mob, threaten the children, throw stones, lob dynamite through the window, or set the house on fire, as well as police who would automatically side with white residents - all things that happened in this country, he says.

“It was a formal as well as informal barrier to black families moving into white communities,’’ he says. “And that was widespread: It was Northern, Western, Southern.’’

In Massachusetts in the late 1950s, even Celtics star Bill Russell needed the help of white friends to sound out the neighbors before he bought a house in Reading. Afterward, in an infamous incident, vandals broke into his home there and defecated on his bed.

Greenidge’s play has some thematic similarities to last year’s Pulitzer Prize-winning drama, Bruce Norris’s “Clybourne Park,’’ currently in previews on Broadway. “Clybourne Park’’ - with its purposeful echoes of “A Raisin in the Sun,’’ the classic drama by Lorraine Hansberry - begins in 1959, when a white couple sells their home to a black family. That news prompts the community association to make a counteroffer.

Harry and Nancy Johnson, an interracial couple who bought a house on White Place in Brookline in 1967, experienced something similar on their first morning there, but with a twist. The self-described matriarch of the neighborhood knocked on their door and pulled out a petition signed by the neighbors, “asking that we sell the house to them, because they did not want us to live there,’’ recalls Harry Johnson, who is black.

Then the matriarch advised him not to worry about it. “I will take care of this, and they will do what I say,’’ she told him, and tore the petition up.

Like the Dances, the Johnsons had acquired their property through unusual methods. Nancy Johnson, who is white, went to look at the house accompanied by their white minister, a friend who was assumed to be her husband. A stay-at-home mother at the time, she applied for the mortgage, while her husband, a technical writer at Polaroid, “had to spend the next couple of months hiding,’’ he says - from the sellers, from the real estate broker, from the neighbors.

“The only time I saw the house was after dark, in the car, with Nancy driving and me in the backseat, just peeking up barely above the window so I could see what the house looked like,’’ he says. “I made every effort not to be seen in the neighborhood.’’

Kirsten Greenidge didn’t get to listen to her grandparents tell stories of their home-buying experience. “I never heard my grandmother talk about it ever. Ever, ever, ever,’’ she says, shaking her head. Her grandparents, who loved Arlington and loved their house, preferred to be positive around Greenidge and her two sisters, she says.

Samuel Dance died in 2001, and Ariel Dance in 2007, a few years after she sold the house on Claremont Avenue to pay his medical bills. “The Luck of the Irish,’’ which is in part about the importance of feeling at home, is dedicated to them, and to Greenidge’s 4-year-old daughter, Katia.

Because the play grapples with issues of race, class, and belonging in suburbia, Greenidge worries that her opinion of the place where she grew up could be misconstrued.

“I don’t want Arlington to feel slighted at all,’’ she says, making clear that she, too, loves the town. “I do. I’d move back there if I could afford it.’’

THE LUCK OF THE IRISH Presented by Huntington Theatre Company