From Chicago, joke’s on Hub

Second City troupe comes to town with revue of foibles 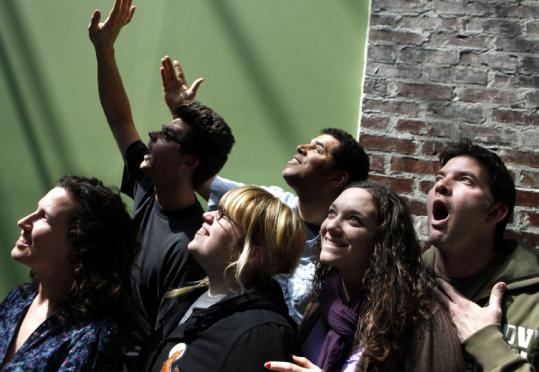 CHICAGO — If the pinnacle of humor is laughing at yourself, Bostonians are about to be put to the test.

On the second story of a sprawling Chicago complex regarded as comedy’s sacred breeding ground, a group of Second City actors are in a Boston state of mind. It is the first morning of rehearsals for a new show called “One If by Land, Late If by T,’’ and cast members are slouched around cocktail tables, reading scenes that skewer Hub locals from Paul Revere to Mayor Tom Menino. Also on their hit list: Southie, gay marriage, Berklee dropouts, Tom and Gisele, and our city’s history of racial tension.

The Second City — which has nurtured such talents as Alan Arkin, Joan Rivers, John Belushi, Tina Fey, and Steve Carell — has formed an unusual partnership with the Boston company Improv Asylum to create this show, which comes to the Calderwood Pavilion for a three-week run starting tomorrow.

Boston is the sixth US city to be on the receiving end of such a custom-written revue. So what exactly is so laughable about Bostonians?

“There are all these things that are flawed about the city, but people love them,’’ says Seth Weitberg, one of the show’s writers. “People don’t want them to change because it defines who they are.’’

“You’re tolerant of gay marriage but not of people who are disloyal to the ,’’ he says. “There’s a certain hypocrisy about Bostonians that we think is really funny. You’ll complain about potholes in the street and then complain when the trucks come to fix them. In the show, we mention South Boston locals complaining about yuppies coming in and ruining things: ‘I don’t need someone coming to destroy my town. I can destroy it myself.’ ’’

For Improv Asylum, which contributed two actors to the cast, the partnership is an opportunity to expand its audience. “We want to be able to say to the people who have never been to Improv Asylum but are going to see Second City, ‘You can see a similar show in the North End 52 weeks a year,’ ’’ says Improv Asylum co-owner Norm Laviolette.

As for the Chicago company, the aim is to train the theater’s tried-and-true mode of political and social satire on one region’s quirks, obsessions, and collective identity. “Every city is so freaking weird,’’ says Jenna Altobelli, managing director of Second City Theatricals. “And the people in the city are the first ones to tell you that.’’

That’s why Second City sent Weitberg and co-writer Jesse Case to Boston in February for a four-day immersion, to learn as much as they could from people on the ground. Guided by representatives from Improv Asylum, they met with politicians, figures in the arts, characters on the streets, friends of friends, ex-classmates, and journalists, even a group of Boston Globe editors. They rode the trains, cheered the , queried the cabbies, and got some surprises.

“Jesse and I would bring up issues we thought were big deals, like Deval Patrick, and people were, ‘Eh. . .’ ’’ says Weitberg, who was born in Boston. “Bring up the Phantom Gourmet, and everyone has an opinion.’’

Each night Weitberg and Case, who wrote the show’s half-dozen songs, holed up in their hotel room into the wee hours, poring over copious notes taken during 12-hour days and pitching scenes to each other as larger themes began to emerge.

On the plane back to Chicago they made a final list of topics. Duck Tours? Out. Extreme Sox fandom? In. Two weeks later, they submitted a variety of scenes, structured improvisations, and songs to their producers and director T.J. Shanoff. They found there are built-in obstacles to selling a joke about, say, a certain fugitive from the law.

“They were like, ‘Who the hell is Whitey Bulger?’ ’’ Case recalls. “Well, he’s a folk hero in Boston. Also, no one in Chicago knows Menino is a mumbler.’’

The very idea of using writers to create a Second City revue marks a wholesale departure from the theater’s once-signature process and founding ideology: performers generating material through improvisation. But scripted shows are now a big part of the company’s rapidly expanding brand. In recent years, the organization has launched Second City Theatricals, sending out national and international tours, and a lucrative corporate arm, Second City Communications, which presents custom events and workshops. Second City even supplies the yuks on Norwegian Cruise Lines.

So is Boston the latest target in a joke-spewing, money-making machine?

Some of the old guard have criticized how far Second City has strayed from its roots as a subversive, improv-based collective, but “content is king’’ and “funny comes first’’ are mantras in the company’s new administrative offices. Because Boston is the first place where a comedy troupe rather than a traditional theater is the presenter, “One If by Land, Late If by T’’ will be sharper and edgier than its city-specific predecessors, Altobelli says.

With script in hand, Shanoff has just two weeks to put the show together. Rehearsing a song about a groper on the Green Line, the director foments a shouting match about the funniest euphemism for the male sex organ. Later, he instructs everyone to think up a race joke for the show’s one black performer to use during the opening musical number. He wants to put a finer point on Boston’s history of troubled race relations.

“I think one of the reasons they brought me in is my shows tend to push the envelope,’’ says Shanoff, who went to college at Emerson. He describes his approach to comedy as “more ‘Colbert Report’ than ‘Everybody Loves Raymond.’ ’’

Despite the show’s many Hub ties — at one point Kylie Fitzgerald, an Improv Asylum actor who lives in the North End, whips out her CharlieCard to show castmate Tim Sniffen what his character looks like — there is really no predicting how the humor will land on local ears.

“What you see in previews and what you see opening night could be massively different,’’ says Altobelli. “We hope not. But we’re fully prepared.’’

Boston is a tough audience, but one that loves comedy, says Improv Asylum co-owner Chet Harding, an alum of Second City’s conservatory program. When the Second City creative team expressed concern about Bostonians’ reputation for being prickly with outsiders — let alone outsiders who make fun of them — Harding assured them that “if you deliver, you’re a rock star. We’re very good at laughing.’’

Case agrees. “People in Boston have a deep love for their city. Especially the bad parts.’’

Joan Anderman can be reached at anderman@globe.com. The show runs from April 20-May 9 at Wimberly Theatre, Boston Center for the Arts. Tickets are available at 617-933-8600 or www.bostontheatrescene.com