THIS STORY HAS BEEN FORMATTED FOR EASY PRINTING
COMEDY REVIEW

Garofalo directs stinging wit toward herself 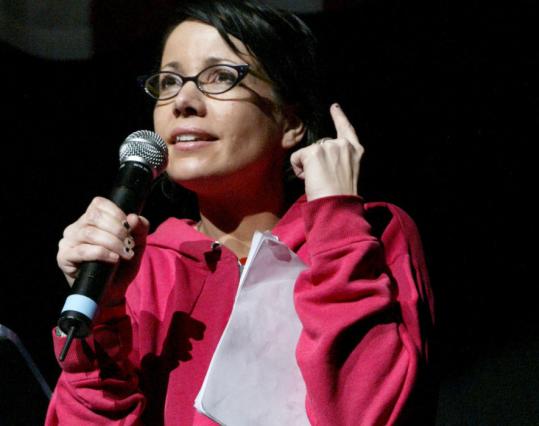 Janeane Garofalo doesn't hold back -- whether she's onstage describing a night of binge eating or on national TV calling the conservatives who attended last month's Tea Party rallies racists. Saturday night at the Alternative Comedy Festival in Somerville, the subject was her neuroses, and she left no obsession unturned.

She came out running, wearing shorts, black tights, and a pair of red Puma boots, and climbed straight into the audience. It was rumored that the Tea Party people were planning to protest the show, and she addressed the possibility right away - "If there's any teabaggers here, welcome, and as always, white power" - but there was no sign of them.

Because she's so outspoken, Garofalo comes off as fearless, yet she's anything but. In fact, she claimed she was so nervous about the protesters that she took a pair of scissors to her hair before the show.

Clearly, Garofalo has some issues, and many are of the addictive-personality sort. She told a story about looking for a snack at a friend's house and being annoyed at the nearly empty bag of chips she found in the pantry: It's the whole bag or nothing for her.

Alcohol is something else she's struggled with, and she's a fan of pills, too. A doctor prescribed an antidepressant to treat her fibromyalgia, and she likes the effect: "I had no idea I was chronically dissatisfied," she said.

Garofalo's hourlong set was more of a fascinating peek inside her head than a standup comedy routine. She doesn't want children, she told the audience, although she does have an imaginary daughter named Tiger Jane. "I don't have a fear of intimacy," she said. "I have a lack of interest in it."

It's ironic then, given her confessional nature, that she's not a fan of self-obsessed social networks like Facebook and Twitter. "It's narcissism. Take it from a narcissist," she said, once again directing her stinging social commentary at herself. "At least I have the decency to hate myself."

The late show Friday night had a much sillier tone. Eugene Mirman kicked it off with his off-the-wall lists and mass hate-mail campaigns against , and Rob Riggle kept it going with stories about the horrific scene inside men's restrooms at stadiums. After his set, Riggle joined the Upright Citizens Brigade for a hilarious series of improv skits based on an audience member's life, which, in the comedians' interpretations, revolved around Lowell being the black-tar heroin capital of the country.