Also at the Altcom Festival 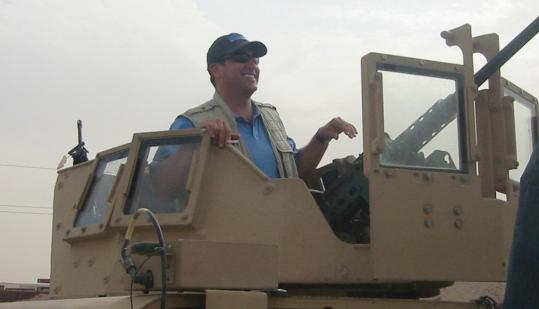 In service to country and comedy

Astute watchers of "The Daily Show" may have noticed, tucked away at the end of a recent show where the "Moment of Zen" usually plays, a congratulations for Rob Riggle. Riggle, who left the show at the end of last year, will soon be promoted to lieutenant colonel in the US Marine Corps Reserve.

Riggle has been juggling comedy and his commitment to the Marines all his adult life. He was a theater and film major, and joined the Marines as an aviator after college to avoid waiting tables. But he couldn't get comedy out of his system. "I realized, if I didn't try comedy, I would regret it the rest of my life," he says, speaking by phone from a movie shoot in Atlanta. "And I couldn't live with that."

Riggle, who appears at the Somerville Theatre Friday, usually fulfills his minimum commitment of 38 days a year in the Marines by working in public affairs either in New York or Los Angeles, but his service has taken him to Kosovo (where he received a Combat Action Ribbon), Liberia, and Afghanistan. Riggle says he has maintained a fairly moderate stance on world events and thinks people might be surprised to find the politics in the Marines - and on "The Daily Show," for that matter - aren't as rigid as they imagine.

Rob Riggle joins Eugene Mirman, the Upright Citizens Brigade, and Ian Moore as part of the AltCom Festival Friday at 10 p.m. at the Somerville Theatre. Tickets are $29 at 617-931-2000 or www.ticketmaster.com.

A look inside our 'finest news source'

Twenty years ago, The Onion was a treasure-trove of journalistic parody that few outside Madison, Wisc., had ever had the pleasure of reading. Now it's an industry, with 530,000 copies distributed weekly in 10 cities and headquarters in New York. More than 5 million unique visitors go to TheOnion.com every month, and the brand has spawned a couple of New York Times bestsellers.

AltCom will give Boston fans a peek behind the curtain May 10 when The Onion comes to the Armory in Somerville. Associate editor Megan Ganz will be on hand with a few writers to explain The Onion's philosophy of world domination. She finds it funny to think about the shy, introverted writers behind it all. "The 'area man' person that we always make fun of," she says, "the shlubby guy lying on the coach with his hand in a bag of Doritos, is just who we are."

Still, writing for The Onion is not a job just any "area man" can step into. Ganz says people offer her suggestions all the time for comic headlines, which is what the Onion does better than anybody in the business. "The problem usually is not that they're not funny," she says, "it's that they don't understand that we have, oh, eight to 10 words in which to make the joke."

The Armory show will offer insight into how those headlines are written, along with video and audio clips from The Onion News Network and The Onion Radio News. "It's a really good look inside the office and how we do what we do," says Ganz.