THIS STORY HAS BEEN FORMATTED FOR EASY PRINTING
Review

A bicycle (or two) built for view 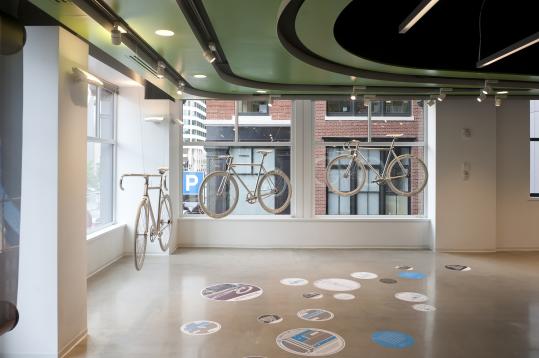 Sailing ships excepted, there is no more beautiful means of human transportation than a bicycle. Its pared-down geometry of circle and line is Euclid set in motion. As a joke, Marcel Duchamp famously put a bicyle wheel atop a stool as an example of “ready-made” sculpture. Ho, ho, non-cyclists say. The joke is on them, since that wheel, as an appreciative Duchamp knew perfectly well, was as beautiful as a Brancusi.

Driving is faster. Walking is cheaper. But no way of getting around better combines speed and efficiency, affordability and convenience. And the warming bicycles contribute to isn’t global but personal (as any cyclist who’s ridden in winter can happily attest).

That’s the message of “Let’s Talk About Bikes,” an enthusiastic and informative, if also somewhat scatty, exhibition that runs at BSA Space through Aug. 31. BSA Space is the exhibition space in the new Boston Society of Architects home, on the waterfront.

There are bicycles above, hanging from the ceiling, and words and photographs underfoot, on text discs on the floor (circular to mimic a bicyle wheel?). The show’s thrust is more informational than aesthetic. Even so, the presence of more bicycles would have been welcome. Talking about bikes is fine. Looking at them is that much better (riding them is best of all, of course). The half-dozen examples of locally produced custom bikes — they’re at eye level, unlike the decorative ones hanging from above —make one eager to see more. The Navigator folding bike, for example, is a marvel of elegant functionality, and Fleet Admiral Skunk’s chopper is like a two-wheeled movie star simultaneously auditioning for “Easy Rider” and “Bicycle Thief.”

Almost as cool as the bikes are a set of quotations about cycling from the likes of John F. Kennedy, Jean-Paul Sartre, Susan B. Anthony, Ernest Hemingway, H.G. Wells, and one Thomas M. Menino. “The car is no longer king in Boston,” the mayor’s quote says. But is the bicycle now even a baron?

Putting most of the texts on the floor is an economical use of space, perhaps too much so. The placement is a bit hard on the neck — and as either metaphor or imitation it completely contradicts how cyclists take in the world around them as they ride.

The show focuses on five themes: infrastructure, culture, transit, production, and participation. The distinctions among the themes are somewhat arbitrary. There’s a display on Hubway, for example, the rental program that began in Boston last year. It could easily fall under any one of the five headings.

Underscoring the indistinctness of the categories is the somewhat confusing layout of the show. Turning a corner, one starts to read about MBTA signage (this must be transit, right?) or bridges (infrastructure?). In fact, these are parts of a rather wondrous show called “The Legible City,” the highlight of which is a section on the Chelsea Salt Terminal (did you even know that Chelsea has a salt terminal?). It, too, runs through Aug. 31. What the terminal has to do with legibility, urban or otherwise, isn’t quite clear, but that’s OK. The way the layout of “Let’s Talk About Bikes” can confuse is OK, too, since it inevitably introduces a visitor to “The Legible City.” Such an unexpected introduction is welcome in and of itself — and also appropriate. As any urban cyclist can tell you, serendipitous discovery is one of the joys of riding in the city. Perhaps it’s the god of transit’s compensation for the risk of getting doored.

A rigid layout wouldn’t be easy to do in BSA Space, anyway. The space is open and airy and unpredictable. Which is both exciting and challenging. A recent visitor who was eager to see a concurrently running photography show, “Chris Enos: The Remaking of Boston,” couldn’t do so because the show is hung in a pair of conference rooms off the space, and people were having, well, a conference in one of them. The refusal to recognize hierarchies of use is an excellent thing, but it’s not without its occasional vexations. In that respect, it’s not unlike cycling. Someone who’s ridden without ever having a flat hasn’t really ridden.