Dreams developed in the darkroom 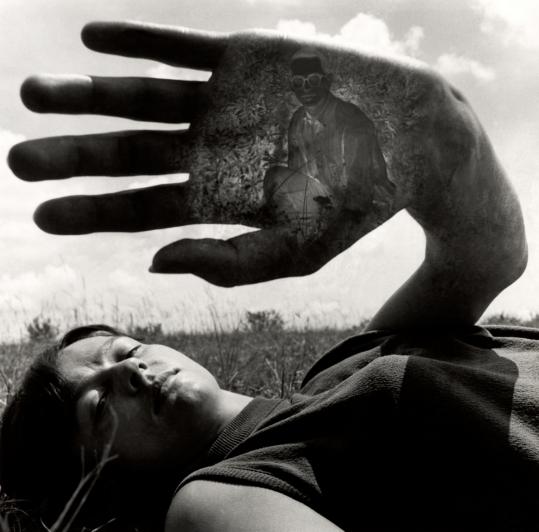 SALEM - Does photography record external reality or does it create its own, self-contained reality? Both, of course. So long as the light that makes the image originates from outside the photograph, there has to be some measure of external reality involved. That’s true of even the most manipulated or purely abstract picture. Conversely, once printed even the most information-packed newsphoto becomes its own reality: two dimensions doing the work of three.

All photography, then, lies on a continuum of outer and inner. So the question becomes where on that continuum does a particular photograph lie? In what direction, and how far along it, does a photographer choose to go?

Jerry Uelsmann has spent more than half a century addressing those questions - and going emphatically, if winkingly, as far along the inner-reality side as he can get. A very extensive sampling of his answers can be found in “The Mind’s Eye: 50 Years of Photography by Jerry Uelsmann.’’ It runs at the Peabody Essex Museum through May 13.

Part comedian, part epistemologist, Uelsmann has been called the father of Photoshop - except that none of his image manipulation is done on a computer. Taking multiple negatives, he will go into the darkroom and use his enlarger to come up with a traditional-looking black and white gelatin silver print - except that there’s nothing traditional about the subject matter.

Uelsmann practices what he calls “post-visualization.’’ He doesn’t take a picture hoping it will duplicate what he has seen through a viewfinder. That would be “previsualization,’’ to use the term Ansel Adams made famous. Instead, he takes his pictures and considers how they might be combined, after the fact, to become his ultimate image. What Yosemite was for Adams, or the street for Garry Winogrand, the darkroom is for Uelsmann: his artistic home, the stage where he best practices his artistry. “As far as I’m concerned,’’ Uelsmann has said, “the darkroom is truly capable of being a visual research laboratory, a place of discovery, observation, and meditation.’’

Like Duane Michals or Jeff Wall, Uelsmann stages his photographs. The difference is that the staging takes place in his head rather than before the camera. Certain subjects recur throughout the show - lips, trees, women (often unclothed), hands, water, shorelines, animals - but what Uelsmann does with them is never predictable (other than in its unpredictability).

In “Mechanical Man #2,’’ from 1959, machinery fills the chest of an otherwise-normal-looking guy. In “Untitled,’’ from 1982, a house is revealed as having beneath it a set of massive, gnarly roots. In “Untitled,’’ from 1996, two bears, a set of steps, and a proscenium arch combine to make a diorama of wilderness - or should that be vice versa? One of Uelsmann’s great virtues is that once he has posed the questions he lets you supply the answers.

“Untitled’’ is the most common title in “The Mind’s Eye,’’ which is fitting. How do you give a title to something that doesn’t exist other than on a sheet of photographic paper? As Uelsmann has nicely put it, “I think of many of my photographs as being obviously symbolic but not symbolically obvious.’’

Uelsmann offers juxtapositions that are conceptually jarring yet visually seamless. In that regard, his work recalls John Heartfield’s marvelous, and marvelously subversive, photomontages of the 1920s and ’30s. Politics interested Heartfield far more than dreams did; he was symbolically obvious (his works failed if they weren’t). Dreams are much more Uelsmann’s style. His pictures are as much product of dreamroom as darkroom.

John Szarkowski, the legendary Museum of Modern Art photography curator, wrote in 1978 that Uelsmann’s “fanciful, intricate, and technically brilliant montages have been broadly influential, but not widely followed. His pictures persuaded half the photography students of the sixties that manipulated photographs could be both philosophically acceptable and aesthetically rewarding, but few of those students adopted Uelsmann’s fey, Edwardian surrealism, or his very demanding technical system.’’

Uelsmann’s debt to Surrealism is obvious - and one he acknowledges. The show includes photographs whose titles allude to Magritte and Man Ray, for example. The danger with Surrealism is that it’s all punch line - “Oh, I get it!’’ - with little or no subsequent comedy. Once the joke is gotten or the puzzle solved, it ceases to give pleasure. In that sense, great art is also ongoing comedy: The laughter (the pleasure) is effectively endless.

This is the first retrospective of Uelsmann’s work since 1970. It includes more than 90 photographs, along with more than a dozen other items (videos, books, a photographic rubber chicken - or maybe that should be rubber-chicken photograph).

Such industrial-strength playfulness tends to be hit or miss. “Dive,’’ 1967 is a hit. Showing a diver in midair with a splash already below him, it plays with concepts of sequence and time. More important, it looks great. (The cleverest photograph in the world is nothing more than clever if it doesn’t look good. Photography can be a philosophical medium on occasion. It’s always a visual one.)

Another hit is “Full Dome,’’ from 1973. It shows Half Dome, the magnificent (and much-photographed) rock formation in Yosemite National Park, as mirror image - thus making half full. What makes the image so hilarious is that it works absolutely straight. Someone who’s never heard of Half Dome would think that this was simply an impressive landscape photo.

“All American Sunset,’’ from 1971, is a miss. A set of Adirondack chairs in the foreground faces an ocean sunset - except that Uelsmann has substituted an extremely large hamburger for the sun. The conceit could be worse. At least he holds the fries.

Born in Detroit in 1934, as a young man Uelsmann studied with Minor White at the Rochester Institute of Technology. The two photographers could hardly seem more different: Uelsmann the jester and flouter of the rules, White so austere and solemn. Yet the link between them is profound and crucial.

“We were [both] concerned with the kind of metamorphosis that photography could allow,’’ Uelsmann said of White and himself in a 1971 lecture, “that while literally a photograph might show a broken balustrade, a fragment of an old building, the shapes themselves were very anthropomorphic, they were very human, there were other qualities that the image had that transcended the literal subject matter.’’

That search for something beyond led White to the vatic and gassy, it led Uelsmann to the incongruous and comic. Inevitably, their relationship recalls Marx’s famous remark about how history begins as tragedy and repeats itself as farce. It says a lot about both men that each would probably take his assigned noun as a compliment.

White turned on its head William Carlos Williams’s mighty injunction to American writers and artists - “no ideas but in things.’’ No things but in ideas, declare White’s portentous images of kelp and rocks and driftwood. His worship of the abstract and incorporeal is ultimately a rejection of a common reality. Uelsmann’s is an embrace of an uncommon one.

“I am involved with a kind of reality that transcends surface reality,’’ he says. “More than physical reality it is emotional, irrational, intellectual, and psychological. Because these other forms of reality don’t exist as tangible objects, I can honestly say that subject matter is only one consideration.’’ Yes and no. It’s only one consideration, but also the most important consideration, since in the end Uelsmann has just one subject: his own imagination.

THE MIND”S EYE: 50 Years of Photography by Jerry Uelsmann