Local theaters ready to bow to tweeters in the audience

But distraction to others a primary concern 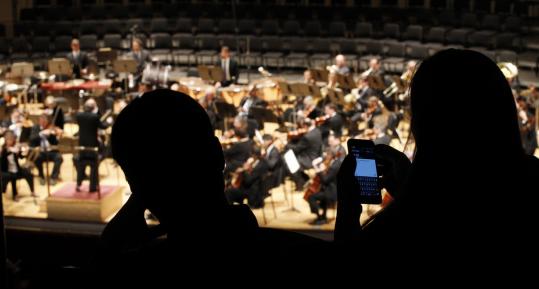 To tweet or not to tweet? That’s the question facing Boston-area theaters as live-performance venues nationwide start offering “tweet seats’’ for patrons who feel the need to tweet about what they are seeing during the show, not just after it.

Purists are already complaining about the glow from all those tiny screens; think of it as secondhand phone. And Suffolk University English professor Thomas Connolly calls the trend a victory for marketing directors.

But tweet seat sections are gaining a fingerhold in Massachusetts. The Lowell Memorial Auditorium has tweet seats planned for the mid-January run of “Sesame Street Live’’ and two subsequent shows. Tweet seats may be offered at the Lyric Stage Company of Boston’s spring performance of “Avenue Q.’’ the irreverent puppet musical for adults. It may also come sometime in 2012 at the Hanover Theatre for the Performing Arts in Worcester and at the Central Square Theater in Cambridge, where the marketing director wants to figure out just where in his 225-seat venue tweeters can flex their thumbs without disturbing fellow audience members or the performers.

The marketing value of such an addition is clearly attractive. Subscription rates are falling across the country, and a younger audience remains elusive. Live tweeting - silent, of course - is seen as a way to enhance the experience for the tweeter and to encourage followers to see the show.

The idea is not entirely new. Across the country, social media users have been live-tweeting performances for several years. The Lyric Opera of Kansas City offered tweet seats for its final performance of Gilbert and Sullivan’s “H.M.S. Pinafore’’ in 2009, and patrons have live-tweeted “Avenue Q,’’ in San Jose and “Hello! My Baby’’ at the Norma Terris Theatre in Chester, Conn. Tweet seats may soon play Broadway itself, at a “Godspell’’ revival.

At the Palm Beach Opera this month, tweeters updated followers on the tragic love story between an American officer and a geisha in Puccini’s “Madama Butterfly.’’ “Cio-cio san is telling it like it is! #pbobutterfly,’’ one tweeter wrote. “Butterfly will die. Goosebumps. #pbobutterfly,’’ wrote another.

At some performances, tweeters not only broadcast their thoughts but share additional information about the music or onstage action. The Cincinnati Symphony Orchestra offered tweet seats at several performances this fall, and at each, an assistant or associate conductor backstage tweeted insights about the music and answered questions in real time.

During “The Rite of Spring,’’ audience members following the action at #CinSym got regular tweets, including one reading, “The piece starts out with a bassoon solo that famously pushes the upper limits of the instrument’s register,’’ and “This is one of the most rhythmically complex pieces of music ever composed up until this time, only to be superseded by the finale.’’

But whether live-tweeting Stravinsky is a force for good or evil remains open for discussion. “It’s a sensitive thing,’’ said Jared Fine, marketing and communications manager at the American Repertory Theater in Cambridge, which has not given in to the trend yet.

“You’re turning on a device inside a theater, and it needs to be in a way that’s not going to be distracting to other audience members,’’ Fine said. “But it’s a technology that is very helpful in word of mouth, so it’s something that you don’t want to completely negate.’’

Supporters of the Twitter-critic movement love the immediacy of the medium. But Sarah Ericsson, a harpist twice nominated for a Grammy and a former longtime performer with the Boston Symphony Orchestra, worries that tweeters will judge a performance too soon.

“Concerts are two hours long for a reason,’’ she said. “Sometimes at the opera the singer will save her voice for the second act and [the tweeter] doesn’t know that. A concerto has three movements; it’s meant to be heard in its entirety.’’

The BSO has not discussed tweet seats, but is “open to new ideas,’’ a spokesman said.

The tension between art and @art can be seen at Huntington Theatre Company, where the marketing department’s interest in offering tweet seats has been scaled back to a “Twittermission,’’ an interactive conversation that will take place on lobby screens during intermission among the audience, artists, and tweeters from around the world.

“I am thrilled by how dynamic and compelling our social media outlets are becoming,’’ Peter DuBois, the theater’s artistic director, said in an e-mail. “But I believe that from the moment the curtain goes up to the moment it comes down, the art on stage is all the engagement the audience needs. That onstage moment you miss to read or send a tweet could be the one that sends chills up your spine, stirs you with empathy, or sends your imagination wild.’’

Many patrons are less worried about the tweeters’ enjoyment of the show than their own. “If someone sitting next to me is using their phone it would definitely distract and annoy me,’’ said Sasha Sherman, 28, of Watertown, who frequently attends the opera and the symphony.

But Eric Andersen, 35, an IBM IT architect with 7,000 Twitter followers, says tweeting has become such a big part of his life that he no longer draws a distinction between commenting to a person who is with him physically and a person who exists in his smartphone.

“If something interesting or unique happened once or twice during the performance and I wouldn’t necessarily be able to remember it later, I’d want to tweet it,’’ he said.

As the lines between physical and virtual companionship blur, Elisa Hale, the public relations manager at the Norma Terris Theatre, says social media users need to be accommodated, particularly by theaters trying to attract young patrons.

“You’re talking about people who can barely help themselves from texting while they’re driving,’’ she said.

The push to allow such phone use during shows comes at a time when performing arts attendees are increasingly older than the average US adult, according to a 2008 survey by the National Endowment for the Arts. The percentage of adults ages 18-24 attending classical music concerts fell from 11 percent in 1982 to 6.9 percent in 2008. Ballet attendance among the group also dropped, from 3.9 percent in 1982 to 2.5 percent in 2008.

Not just any tweeter will do, of course. Theaters need a correspondent who is focused on the show and not the Patriots score and who actually knows how to tweet. When the Palm Beach Opera advertised free twitter seats at its final dress rehearsal, it wanted only those with large or engaged Twitter followings.

Even legitimate tweeters can encounter issues. Said Hale: “I was reading what someone had written, thinking of a response, then realizing I should be putting down my phone to clap.’’