THIS STORY HAS BEEN FORMATTED FOR EASY PRINTING
Architecture review

A temple, a masterwork 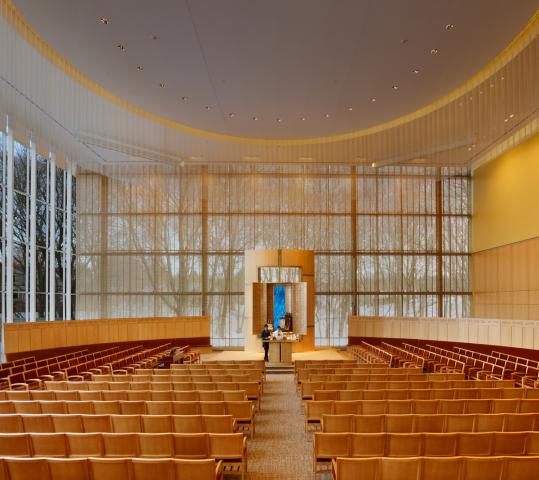 WELLESLEY - Masterpieces are rare in architecture. Architecture is just too complicated for everything to break right. Too much can go wrong: an inadequate budget, a timid client, a clueless public review process, an impossible site, many other disasters . . .

That’s why it’s such a pleasure to visit the new Temple Beth Elohim, a Reform synagogue that opened here nine months ago. The planets were in alignment for this one. Temple Beth Elohim is the best new house of worship to have been built in the Boston area in decades.

The architect is William Rawn, best known for his Seiji Ozawa Hall at Tanglewood and his public library in Cambridge. Rawn admits that when the members of the temple chose him for the job, he knew nothing about Jewish culture. And the temple’s leaders admit they knew little about architecture. Architect and client learned from each other. In so doing, they created a model process for generating good architecture.

More on that in a moment.

First, though, let’s make a visit. Temple Beth Elohim welcomes you before you arrive at the entrance. While you’re still outdoors, crossing a quiet courtyard that separates you from the outside world, you’re walking toward a tall glass wall through which you can see the temple’s entire sanctuary. Nothing feels secret or hidden. Everything feels open. The architecture of clear glass, warm-toned wood, and pale Jerusalem stone is crisp and unpretentious in a way that reminds you of Shaker work.

The heart of the temple, of course, is the sanctuary, seating some 450 for services. Once you’re inside it, you realize that another of the four walls containing the space is also glass. This one is faced with a trellis of maple, through which you can see a ghostly-looking forest of trees. The trellised glass is the backdrop for the altar. The metaphor of a garden is powerful.

During a recent Friday evening service, the sun sank slowly. The stone of the entry courtyard, visible through the clear glass wall, gradually took on a warm ocher tone. Meanwhile, the trees behind the trellised wall morphed from green foliage into darker shapes, visible against the bright sky like a pattern of black damask. Those two worlds outside - the social courtyard and the natural forest - became extensions of the indoor space of the sanctuary. They will, of course, be ever-changing with seasons and weather.

As the world outside grew dim, the sanctuary seemed to brighten. Ceiling lights brought a glow to the many wood surfaces. With the evening shade outside, it was like being at a campfire. The seats can be arranged in different patterns, but wherever you sit you are likely to be face to face with some of your fellow congregants and thus feel you’re in a gathering, not an audience.

The sanctuary is entered off a broad corridor that’s wide enough to support plenty of before-and-after-service schmoozing. Every activity of the synagogue opens off this same corridor, and there are a lot of activities, including school groups of all ages. The common shared corridor gives everyone the feeling of being members of one diverse community.

Is Temple Beth Elohim modern? Is it traditional? This is the best kind of building, the kind where that question simply doesn’t arise. There are some obvious influences, notably a famous 1957 chapel in Finland with a glass wall to the forest. But Rawn never stoops to imitation. He absorbs his sources and reinvents them to fit the situation. I like, too, the way Joel Sisenwine, the senior rabbi, puts it. “We’re experimental,’’ he says. “We’re between new and old . . . between heavy and light.’’

Back to the question of process. How did everything turn out so well?

For one thing, the members of the temple knew what they wanted. They wrote up a list of goals in advance. Primary was the need for a building that would nurture a sense of community. “We wanted a place for all of us to be together and learn to build a community,’’ says Harriet Warshaw, the temple’s president during the new building’s design and construction. “We didn’t want the temple to lose the sense of intimacy as it got bigger.’’ Architect Rawn responded by shaping the sanctuary to be the right size for a normal attendance of 450, but expandable, by means of sliding walls, to hold as many as 1,200 on High Holy Days. In neither case will the space feel either too empty or too crowded.

A second move was a visit to Israel, made at Rawn’s suggestion. The architect, one of his staff, and a dozen or so members of the congregation’s building committee took a 10-day trip. They visited many buildings, not all of them temples. “We steeped ourselves in Israel; they steeped themselves in architecture,’’ says Rawn. Each party got to know and trust the other. Many of the motifs of the buildings they visited influenced the design of Temple Beth Elohim. “We felt it should speak of Israel,’’ says Warshaw.

A third crucial move was an unexpected decision about the siting. The temple members assumed they would demolish their old synagogue and build the new one in the same place. Rawn persuaded them, instead, to put the new building on what had been the parking lot. The lot occupied what Rawn describes as an “unbelievably beautiful green bowl’’ - a low pocket of land surrounded by deciduous trees. Today, wherever you walk in the synagogue, you’re aware of a surrounding world of nature as you pass the glass walls and windows. The “green bowl’’ becomes, in effect, the outermost shell of the architecture. As a bonus, the congregation was able to continue to use the old synagogue, since torn down, while the new one was being built.

If there’s anything to regret about Temple Beth Elohim, it’s the fact that you pretty much need a motorized vehicle to get there. Almost 1,000 families are members, and they are scattered. That’s a lot of petroleum, a lot of parking for cars and buses. And Wellesley, a shoppers’ town, can be a traffic nightmare. The temple looks green and, like any serious building today, it genuinely is green in its use of materials and energy. But through no fault of its own, it’s still only a momentary oasis in a gas-powered world that needs to change.

That’s a problem for another day. This lovely, thoughtful chunk of architecture is well worth a visit.