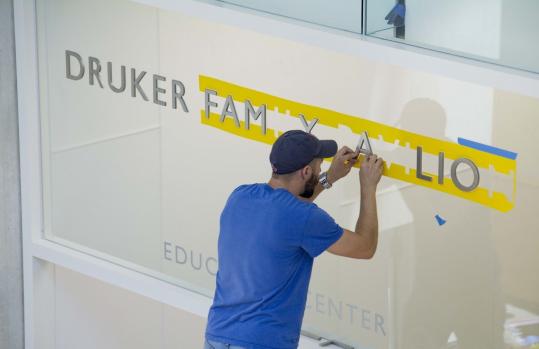 The MFA pavilion that will be used for classes, lectures, and artist demonstrations. (Museum of Fine Arts)
By Geoff Edgers Globe Staff / September 7, 2011

Last year’s dedication of the new Art of the Americas Wing at the Museum of Fine Arts wasn’t just a moment to celebrate. As it turns out, the Nov. 12 ceremony attracted one of the biggest gifts for contemporary art in the museum’s, and Boston’s, history.

Ronald Druker, a real estate developer familiar in local philanthropic circles, has decided to give $5 million for the museum’s soon-to-open contemporary art wing. In return, the MFA will name an educational pavilion for Druker, his father, Bertram, and his grandfather, John. The pavilion’s prime spot, directly across from where school groups will enter the wing, will be used for classes, lectures, and artist demonstrations.

“Going back there for the opening of the Americas wing reminded me that my family has had a history at the MFA,’’ said Druker. “I also thought they had done a great job with the wing.’’

MFA director Malcolm Rogers said the museum, which has approached Druker in the past, did not come to him for this gift. Druker contacted the MFA.

“That’s what’s so exciting,’’ said Rogers. “It really was an example of what we were doing and had achieved that brought him into our family.’’

The MFA’s sprawling, $345 million Art of the Americas Wing opened last November as part of a massive expansion project. The Linde Family Wing for Contemporary Art is a much smaller project with a $12.5 million price tag involving the renovation of the museum’s existing west wing. It opens to the public Sept. 18.

The Druker gift is far from the largest in MFA history - eight donors have each given more than $25 million in total - but it is the largest individual contribution since the MFA closed its $504 million Art of the Americas Wing campaign in 2008. It’s also notable that it is meant for the contemporary wing.

The gift is earmarked for the pavilion and programs that will take place there rather than for art acquisitions.

John Druker founded the family’s real estate business, and the company built the hotels Kenmore and Braemore, The Colonnade Hotel and Residences, the Heritage on the Garden, and Atelier 505.

In recent years, Druker, 67, pushed for the New Center of Arts and Culture, a project that was being driven largely by Jewish members of Boston’s cultural community to create a space modeled on New York’s 92d Street Y.

But the New Center gave up its plans to build a permanent home, opting instead to program events in other venues.

Druker said the demise of the New Center building project was not why he contributed to the MFA. And he added that he is no stranger to the museum.

He and his wife, Julie, would visit the museum when they were children. Druker served as an MFA overseer from 1986-1990, and was a member of the Education Visiting Committee from 1992-1996. In 1979, Druker’s father gave $10,000 to the School of the Museum of Fine Arts in memory of Nancy Druker, Ronald Druker’s sister. She had studied at the SMFA before her death in a car accident at the age of 25.

In addition, Druker counts among his longtime friends MFA board of trustees chairman Richard Lubin and trustee Joyce Linde, who, along with her late husband, Edward, contributed more than $25 million to the museum over the years.

“The interesting part of this is that it wasn’t during that campaign and wasn’t caused by a solicitation at any time but his just having a light bulb go off,’’ said Lubin, a friend of Druker’s since they grew up together in Newton in the 1950s.

In an interview, Druker said he was indeed moved when he came to the Art of the Americas Wing opening ceremony. It reminded him of the family connections that lead people to donate and of his own multigenerational link to the MFA. He wanted to commemorate that in a meaningful way, so in early January Druker asked Lubin, Linde, and Rogers to meet him for a walk around the Art of the Americas wing. On a snowy morning, before the MFA opened to the public, they discussed several naming opportunities.

Rogers suggested spots in the Art of the Americas Wing; the seven new galleries in the Linde Family Wing for Contemporary Art had already been assigned the names of other donors. But Druker got excited when he heard about the glass pavilion meant to house educational programs in the contemporary wing.

“One, I like the idea of helping to foster the educational mission of the institution,’’ said Druker. “Two, I wanted to be part of the Linde wing, because I had had a relationship, long standing with Joyce and Ed Linde. Finally, I’m interested in architecture. There was a little bit of a stand-alone quality of the pavilion and I liked the renderings of what it looked like.’’

Druker said there’s no particular reason he didn’t contribute to the MFA’s previous campaign, which raised more than any arts institution had ever been able to in the past.

“No one was soliciting me and I had a lot going on philanthropically,’’ he said. “Timing is everything.’’

An interactive guide to the Museum of Fine Arts' new Arts of the Americas Wing – a $504M expansion that was more than 10 years in the making.
Your comment is subject to the rules of our Posting Policy
This comment may appear on your public profile. Public Profile FAQ