A ‘Porgy’ with spirit and heart 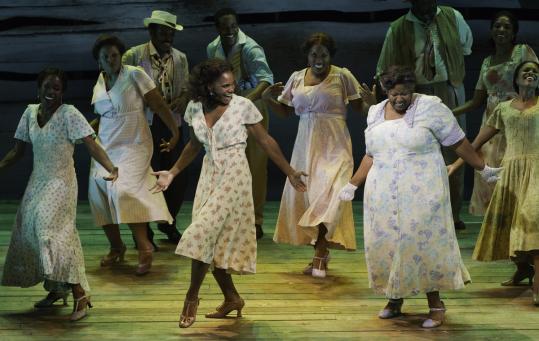 CAMBRIDGE - In 1985, as James Levine was preparing to conduct the Metropolitan Opera’s first performance of “Porgy and Bess,’’ he told The New York Times: “It’s always easy to make something different out of it. But the trick with any masterpiece is to make use of what the genius gave you.’’

The genius in question, of course, was George Gershwin. Fast-forward to a few weeks ago, when another composer of genius - Stephen Sondheim - created a considerable stir by firing off a scathing letter to the Times about the American Repertory Theater’s musical theater adaptation of Gershwin’s masterpiece, accusing director Diane Paulus and her collaborators of “arrogance’’ and “disdain’’ in their attitude toward “Porgy.’’

As it turns out, Sondheim needn’t have worried. The ART’s vibrant and stirring production of “The Gershwins’ Porgy and Bess’’ makes some revisions, but Paulus and adapters Suzan-Lori Parks and Dierdre L. Murray are largely faithful to the spirit and the structure of the original. And in Audra McDonald, this production boasts a Bess for the ages.

With a scar across her left cheek and a wary, wounded demeanor to match, McDonald’s Bess emerges very slowly from her shell, drawn out into the world by the unconditional love of Porgy (Norm Lewis), a disabled beggar. Their duet on “Bess, You Is My Woman Now’’ near the end of act one is a thing of beauty to watch and to hear: Lewis eases into it gently and tentatively, as if not entirely sure Bess will reciprocate, while the subtle play of expressions on McDonald’s face suggests that, mid-song, the realization has dawned on Bess that she does indeed love Porgy.

Later, when Bess pleads with Porgy not to let her former lover, Crown, take her away again in “I Loves You, Porgy,’’ McDonald brings a shattering, life-or-death urgency to the scene.

For much of the show, the gray-bearded Lewis is somewhat understated, as if he is still exploring the different dimensions of his character. But he finds Porgy’s voice fully in song, with a robust rendition of “I Got Plenty of Nothing’’ that captures Porgy’s wit, wisdom, and newfound sexual confidence.

“The Gershwins’ Porgy and Bess,’’ which is already slated for Broadway in December, gets off to a strong start when Nikki Renée Daniels, as Clara, a fisherman’s wife, delivers a soaringly beautiful rendition of the dreamy, languorous lullaby “Summertime,’’ with an adorable and amazingly poised baby in her arms.

In a deft touch, the misogyny of “A Woman Is a Sometime Thing,’’ sung by Clara’s husband, Jake (Joshua Henry), is turned on its head when the women join in, sending the message that the men should not take them for granted.

The story unfolds in the late 1930s in Catfish Row, an African-American quarter of Charleston, S.C. Porgy takes Bess in when the volatile and domineering Crown (Phillip Boykin) has to flee Catfish Row after he kills a man. Threats to the happiness of Porgy and Bess are ever-present, first in the form of Sporting Life (David Alan Grier), a peddler of “happy dust,’’ and then Crown, who comes out of hiding and reasserts his control over Bess.

After spending the night with Crown, Bess returns in a state of high fever to Catfish Row, where Porgy, ever-loyal and ever-forgiving, keeps an anxious vigil. A hurricane hits when local fishermen are out at sea. Crown rematerializes at the height of the storm and seeks to reclaim Bess, but he is killed by Porgy.

In the adaptation by Parks and Murray, the townspeople are no longer depicted as superstitious, a welcome excision of offensive racial stereotyping from the 1930s. Nor does Bess succumb to Sporting Life’s offer of “happy dust’’ at the end and lapse into a drug-addled stupor of acquiescence; instead, she pours the drugs into a pail. (She does leave Catfish Row for New York City, however).

As Sporting Life, Grier deftly captures the drug peddler’s predatory joviality, brandishing a Bible during a defiantly sacrilegious “It Ain’t Necessarily So’’ and pulling out all the stops in “There’s a Boat That’s Leaving Soon.’’

Lewis’s Porgy uses a cane rather than a goat-drawn cart to get around, but this is not the first “Porgy’’ to go that route. In Trevor Nunn’s 1987 production of “Porgy and Bess’’ at Glyndebourne Festival Opera (recorded for television in 1993), Porgy relied on a pair of canes, which he melodramatically cast aside at the end of the opera. The ART production take a less histrionic, more effective approach. Porgy throws his cane to the ground when he learns Bess is gone. Then he launches into a heartbroken “Where’s My Bess?’’ And then, finally, Porgy calls for his cane and, with a goosebump-raising performance of “I’m on My Way,’’ he sets out on the long journey to find his Bess.

THE GERSHWINS’ PORGY AND BESS By George Gershwin, DuBose and Dorothy Heyward, and Ira Gershwin.