Three decades of dancing on air with Mark Morris 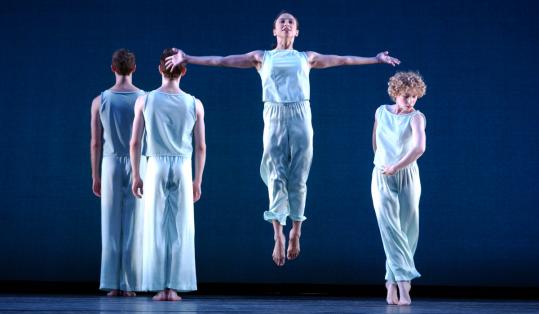 Members of the Mark Morris Dance Group in “V,’’ one of the choreographer’s four dances being performed at Jacob’s Pillow Dance Festival. (Robbie Jack)
By Janine Parker Globe Correspondent / August 27, 2011

BECKET - We blinked, and suddenly the Mark Morris Dance Group is celebrating its 30th anniversary. Another blink, and it’s the last week of this year’s Jacob’s Pillow Dance Festival, during which Morris’s jolly troupe is performing four of the master choreographer’s works. The giddy program, too, flashes by: Time really does seem to fly when you’re having fun.

Zaniness abounds, but tempered, Morris-style: a foot in the crotch here, a little bump-and-grind there, legs scissoring eventually leading to someone getting kicked in the chin. The over-the-top shenanigans, including the gloriously corny happy ending, work. We’re in expert hands.

It’s no slight to Amber Star Merkens to wish to see Morris the dancer again in his 1981 solo “Ten Suggestions.’’ The dance, set to 10 bagatelles by Alexander Tcherepnin, played live here by pianist Colin Fowler, consists of a series of vignettes that depict a restless, precocious child at play - an apt metaphor for Morris. If the entrance of the long and lean, loose yet articulate Merkens does conjure a slight thrill of resemblance to the ghost of Morris’s younger, dancing self, there is no mistaking that the solo is deservedly hers for the moment.

Like “Resurrection,’’ at first glance the 1998 “Dancing Honeymoon,’’ set to a medley of standards - also performed live - evokes a bygone era. Costumed in a palette of yellow, beige, and white, the three women are fetching, the four men casual, like the leisure class on holiday. Morris creates a gently ribald frolic: Couples form and re-form depending merely on who’s nearby, and when necessary, threesomes manage just beautifully.

Of course, though Morris’s comic well runs deep, he is a serious craftsman, as evidenced in the gift of a finale, his 2001 “V.’’ The title references the music, Robert Schumann’s great quintet for piano and strings (also played live, also excellently). V patterns are cleverly constructed and deconstructed throughout the dance and even echoed in the V-lines of the dancers’ costumes.

The dance is thick with the uneasy yearning that so defined Romanticism; the dancers frequently look beseechingly forward while still reaching back to their partners. But is also filled with that era’s unabashed love of the open air. In one motif, a trio link hands to form a circle; they dip their torsos down, their elbows angling up, then release hands and arch exultantly backward into space.

Amid the dance’s easy, folksy, skipping quality, ballet steps are tossed in like red pepper flakes, standing out brightly and kicking everything else up a notch. And though it’s not a requirement that Morris’s dancers have perfect balletic line - for what it’s worth, some of them do - they perform with a refreshingly lovely freedom in their upper bodies.

“V’’ is also for Victory; it’s one of Morris’s grand slams of a dance that affords the viewer the double pleasure of wanting it to go on forever and yet learning, when the end comes, that it couldn’t be otherwise.