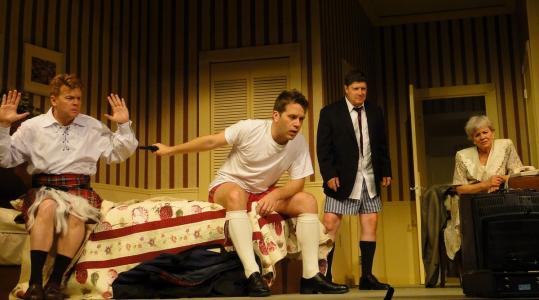 DENNIS - Actors have an edge when it comes to writing for actors: Just ask Molière. Actor/playwright Paul Slade Smith, whose “Unnecessary Farce’’ is enjoying a whip-smart regional premiere at the Cape Playhouse, certainly has the knack. And like the farceurs of old, he relies on character, rather than contrivance, to drive his increasingly frenzied, unrelentingly funny plot.

The play opens as two patently underqualified cops, Officers Sheridan and Dwyer (John Scherer and Jennifer Cody, playing, respectively, a retiring milquetoast and a swaggerer/omniphobe), set up a sting operation in a pair of adjoining motel rooms “in a big town . . . somewhere in America.’’

Alerted to certain discrepancies in the municipal budget - a mere $16 million - they’re hoping that a city accountant, Miss Brown (the glamorous Dee Hoty, gamely mousified here), will, by calling Mayor Meekly (Brad Bellamy) on the carpet, prompt him to offer her an incriminatory bribe.

Their not exactly sophisticated plan is to hook up a video feed from a clumsily hidden camera in Miss Brown’s room to a screen set up in their own hideout. The first in a series of technical glitches, however, has Dwyer - proudly sporting her full uniform to conduct this undercover operation and raptly munching on doughnuts - gasping in disbelief at the sight of Sheridan and Brown going at each other like hormonal teenagers. (It seems that during the previous evening, while prepping, these two shrinking violets somehow ignited a spark.)

When the mayor bumbles in, having entered the cops’ room, Dwyer - who still considers her cover unblown - accidentally sets the tape to replay. Meekly, a cheery innocent, mistakes the clip for a pay-per-view motel perk and finds its interruptus ending underwhelming: “Just people running in and out of rooms, taking off their clothes,’’ he complains. “That hardly passes for a plot.’’

Oh, but it does - especially when you toss in a tough-talking security guard (Michael McGrath), apt to fall to his knees in fervent prayer if anyone so much as points a finger at him; a hit man of hilariously unlikely ethnicity (energetic Jeremy Webb); and the mayor’s wife (Suzanne Hay), a sweet little old lady who, sure enough, is not what she seems.

I’m dying to say more, but it would be downright criminal. I can say that director James Brennan has marshaled his cast - all top Broadway performers who happen to be Cape Playhouse loyalists - to make painstakingly synchronized use of every door, closet, nook, and cranny ( including the space behind the bed) to conduct their ruses, couplings, escapes, attacks, and “Tallahassee Flips.’’ What, you may ask? To which the only appropriate answer is: You’d have to be there.

I can also add a Hanky Advisory: Tears of laughter are all but guaranteed to flow.

Sandy MacDonald can be reached at sandy@sandymacdonald.com.