THIS STORY HAS BEEN FORMATTED FOR EASY PRINTING
PHOTOGRAPHY REVIEWS

Treated to images of Vermont retreat 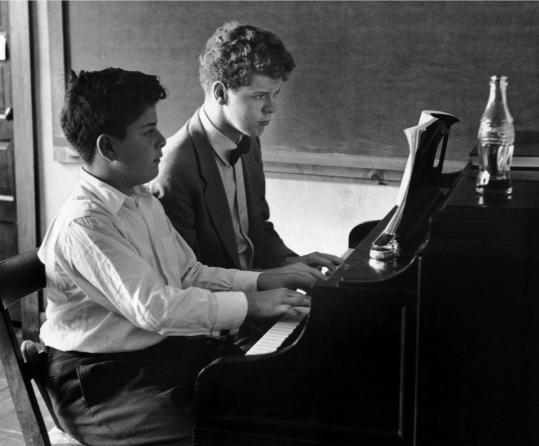 BRATTLEBORO, Vt. - Hearing music is easy - and if you close your eyes you can hear it that much better. Seeing music is a lot harder, and opening your eyes doesn’t help any.

The most obvious way to make music visual is by showing the people who make it. Think of Richard Avedon’s portrait of Marian Anderson, mouth open, eyes closed, captured in mid-song - or Arnold Newman’s of Igor Stravinsky, seated at a piano whose raised cover resembles a quarter note.

The presence of music makers is a given in “Clemens Kalischer: Six Decades of Marlboro Music’’ and “Six Decades of Marlboro Music,’’ complementary (indeed, overlapping) shows that observe the 60th birthday of the celebrated Vermont summer festival and teaching institute. They observe Kalischer’s 90th birthday, too. Like Marlboro, Kalischer is very much alive - albeit not in Vermont but Massachusetts (Stockbridge, to be precise).

The Kalischer show, which consists solely of Marlboro images, runs at the Brattleboro Museum & Art Center though Oct. 23. The nearby Marlboro show runs through Sunday, the festival’s final day.

A 1956 freelance assignment for Vermont Life magazine first brought Kalischer to Marlboro Music. His family had fled Nazi Germany when he was a boy. Taking up photography after World War II, he was successful enough to be included in the landmark Museum of Modern Art exhibition “The Family of Man.’’

Marlboro Music, Kalischer writes in the exhibit brochure, “is a retreat for personal exploration of human thoughts and the human spirit.’’ That sounds grand, even pretentious, but the shows’ photos bear out the truth of Kalischer’s words.

Marlboro Music, being dedicated to the idea of musical community as much as to musical performance, offers a special advantage to photographers. Square dancing and picnics and softball games have their place alongside rehearsals and concerts. A photograph like “Mozart Divertimento in the Dining Hall,’’ from 1998, is exemplary as well as alliterative.

Music may be the most abstract of the arts. But there’s nothing abstract about the many manifestations of community at Marlboro. Both shows have a summer-camp and photo-album feel. It’s telling that hardly any of the 49 images in “Clemens Kalischer’’ include just a single person - and one that does, of the pianist Rudolf Serkin, for decades the heart and soul of Marlboro, has a dog in it, too. Marlboro is that kind of place.

Serkin was the face of Marlboro, too, and he had a wonderfully photogenic one: severity suffused with radiance. Other famous musicians crop up in the photographs: the cellist Pablo Casals; the current Marlboro codirectors, the pianists Mitsuko Uchida and Richard Goode. But the most important presence belongs to the students - the young ones, that is, since every participant there, regardless of age, can be described as a student.

On that Vermont Life assignment, Kalischer photographed a 13-year-old named James Levine playing piano four hands with a 22-year-old Van Cliburn, who looks even younger than Levine. The empty Coke bottle on the piano (Kalischer has a splendid eye for detail) only slightly detracts from the pianists’ intentness.

Kalischer has many photos among the more than 150 in the Drury Gallery show. Other photographers include Peter Checchia, Allen Cohen, George Dimock, Woodrow Leung, Edward Hamilton, George Harris, and J.M. Snyder. It’s hard to assign credit, since captions are few and far between. Maybe it’s a hint to just listen to the music without trying to follow a score?