In Ashfield, an ‘Odyssey’ for the senses 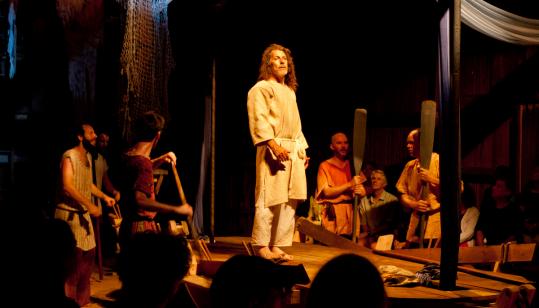 ASHFIELD - Five senses hardly seem enough for “The Odyssey,’’ Double Edge Theatre’s annual “summer spectacle,’’ a sumptuous sensory feast that resonates on so many emotional and intellectual levels. The third in a series of productions inspired by the paintings of Marc Chagall (the other two were 2009’s “Arabian Nights’’ and 2010’s “The Firebird’’), “The Odyssey’’ effortlessly integrates whimsical aerial adventures and puppetry with thoughtful explorations of loyalty and loss, regret and determination, all set within a loose framework of murals and motifs from Chagall’s evocative paintings.

The evening opens with the audience gathered under a tent as John Pietso, accompanied on lute, sings us into Odysseus’ tale. As we listen, we look out on Nancy Winship Milliken’s huge woolen sails as they wave gently in the breeze, changing colors in the sunset just beyond the tent. Like a Pied Piper, Pietso leads the crowd into a pavilion where we meet Odysseus’ son, Telemachus (Matthew Glassman), who rails against his mother’s crowd of drunken suitors eager to take over in Ithaca the moment they are sure Odysseus is dead. Each step casts a more enchanting spell until it’s easy to forget we are wandering indoors and outdoors over several acres of Double Edge’s Farm, and simply believe we’re with Telemachus as he meets Sparta’s King Menelaus (Kieran Smyth) and his queen Helen (Tanya Elchuk) perched gracefully on the wooden Trojan horse Odysseus created that turned the tide in the war for her.

Once the setup has been established, we shift to follow Odysseus, who is constantly frustrated in his efforts to return to his home in Ithaca by the mischievous, manipulative Poseidon (Matthew Glassman) who keeps appearing up in the trees or above his ship, determined to destroy Odysseus no matter what.

We eavesdrop on a conversation among gods who seem to bob and float among the treetops as they command Calypso (Jeremy Louise Eaton) to free Odysseus from the lush island prison where she has kept him - a garden area punctuated by a gorgeous mosaic, beautiful foliage, and monoliths. We follow him to a shallow brook where women are singing and washing in a dance that incorporates the water in a graceful, hypnotic way, and then meet the Circe who transforms Odysseus’ sailors into pigs; the Cyclops who eats the sailors, before heading into a barn where a large dining table is magically transformed into a sailing ship, and then to a lake where he is shipwrecked once again.

Wherever we wander, Double Edge’s artists surround us with stunning visual imagery, haunting vocal harmonies, musical accompaniment, and jaw-dropping aerial feats. The sirens who lure sailors to their death have never been as alluring or creepy as the women writhing in the silks above Odysseus’ ship, and the goddess Athena has never looked as powerful as Jennifer Johnson as she elegantly steps onto Odysseus’ rocking ship in a rich blue gown and magnificent Japanese-style Geta sandals.

“The Odyssey’’ is all about transformation, and the opportunity Odysseus’ journey affords him to grow, make mistakes, and learn. As outrageous as the goofy giant Cyclops is, and as charming as the little pigs are who run out on cue and in their little costume pieces, Carlos Uriona, as Odysseus, constantly reminds us that the focus of this tale is the journey not the destination.

The final image in this “Odyssey’’ continues to haunt me. As Athena recites a poem about relishing the discoveries that are part of a journey, Odysseus heads up a hill among another set of sails, this time ones that shimmer in the darkness, lighting his way, not to an ending, but to another beginning.

THE ODYSSEY Directed and overall design conception by Stacy Klein

Presented by Double Edge Theatre in association with the Charlestown Working Theater, at The Farm, through Aug. 31. Tickets: $25. 866-811-4111, www.doubleedgetheatre.org.