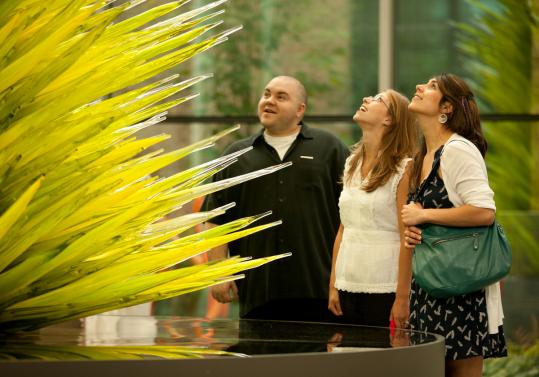 They’ve waited in line for hours, blogged their rave reviews, and begged the Museum of Fine Arts to keep the tower of green glass even after the smash success Dale Chihuly exhibition closes.

Now, visitors to the Museum of Fine Arts are being given a chance to put their money behind their pleas.

The MFA has launched a campaign to raise more than $1 million to buy the 42-foot-tall “Lime Green Icicle Tower,’’ a signature work by the glass artist that’s been grabbing attention in the museum’s new Shapiro Family Courtyard since “Chihuly: Through the Looking Glass’’ opened in April. The public contributions will be matched by those of a group of longtime MFA donors.

It is fairly standard, these days, for a museum to acquire a work from an artist who has been featured in a solo exhibition. But typically, deep-pocketed donors are sought to make those purchases. The MFA’s public appeal includes, for the first time, a chance for museum visitors to give online and by texting on their phones - people can text the word TOWER to 50555, then reply to the follow-up message “To confirm your $10 donation to MFA Boston, reply with the word YES.’’

“People indicated clearly they wanted the piece to stay,’’ said Malcolm Rogers, the MFA director. “Many ordinary people indicated they wanted to give. It’s a great opportunity for people to give in a quite modest way and feel they contributed to making this a great place.’’

The MFA quietly began the campaign last week by adding a donation box next to the piece and sending an e-mail to museum members pointing them to the contribution website. This week, they plan to add tweets and Facebook posts to spread the word.

And later in August, an e-mail blast detailing the campaign will go out to anyone who has visited the Chihuly show. In recent weekends, people have waited hours to see the artist’s works. This week, attendance surpassed 320,000, meaning that when Chihuly closes Aug. 7, it will be at least the fifth-most-visited MFA exhibit of all time, behind just “Monet in the 20th Century,’’ “Monet in the ’90s,’’ “Renoir,’’ and “Pompeii 79 A.D.,’’ which were held in 1999, 1990, 1986, and 1978, respectively.

As visitors stream past “Lime Green Icicle Tower,’’ they echo a question:

“Pretty much from day one, people almost invariably ask, ‘Does this stay, is it permanent, can we keep it here?’ ’’ said Gerald Ward, the senior curator who organized the exhibition. “It’s met with universal acceptance and people are anxious to have it stay.’’

Dale Chihuly, 69, who was born in Tacoma, has had his work added to the permanent collections of dozens of museums throughout the country. His 30-foot-high chandelier, for example, adorns the main entrance of the Victoria and Albert Museum in London. But the glass artist’s work has also been criticized by those who consider it too garish and don’t appreciate its appeal to the mainstream. Globe critic Sebastian Smee is among those who have responded negatively to Chihuly’s work in general, but positively to the icicle sculpture. Reviewing the MFA’s show, Smee criticized the exhibit as “tasteless in a way that a 15-course meal might be tasteless, or a garage with a dozen Ferraris, or a wardrobe with hundreds of pairs of shoes.’’

But in his review, Smee also praised the icicle sculpture as “so good it’s hard to imagine that Malcolm Rogers, the MFA’s director, will not find a way to keep it there long term.’’

Cambridge sculptor Peter DeCamp Haines felt the same way. He isn’t a fan of Chihuly. But he supports the addition of the “Lime Green Icicle Tower’’ to the courtyard.

“First of all, I think that sterile space is extremely well served by that piece,’’ said Haines. “It needed sculpture. The scale of it is perfect for that room. So sort of begrudgingly, I sort of said to myself, ‘Wow, that’s great.’ ’’

Chihuly, who no longer physically builds his own work, had a crew create a 15-foot-tall version of the green tower in Las Vegas, in 2009.

He designed the MFA version especially for the museum’s new courtyard, which has a 63-foot-high ceiling. In March, three workers assembled the 42-foot piece, which weighs about 10,000 pounds and features 2,342 pieces of glass.

The MFA has highlighted the installation by posting a time-lapse video clip of the process on its website.

“I would say, from the very first moment it went on display, people were coming up to me and saying, ‘I hope you’ll keep it here,’ ’’ said Rogers. ’’Whether they’re Chihuly lovers or not, their faces light up.’’

Pat Dowling, a long-time MFA volunteer who works at the museum’s information desk, was captivated by the tower. Twice, she suggested to Rogers that there had to be a way to keep it.

He told her there would eventually be a fund-raiser aimed at just that. In May, the museum’s collection’s committee accepted a proposal from Ward to acquire the work. The fund-raising campaign kicked off two months later.

When Dowling learned of the fund drive, she gave $1,000 online in honor of her 30 grandnieces and grandnephews.

“When you see the children really, from 4 on up, they just are bug-eyed,’’ said Dowling. “They can’t believe these colors and that they can come that near to it.’’

Diane Carnevale, an artist from Hamilton, went to the MFA last week with her mother, husband, and sister-in-law.

She was thrilled to see the donation box and reached into her purse. She gave a dollar.

Back home, Carnevale posted a rave review on her blog.

In a conversation yesterday, Rogers brought up Dowling’s contribution in honor of her younger family members. He was then told of Carnevale’s singular donation.

Here's a look at the top five shows with attendance figures and a work from each.
Your comment is subject to the rules of our Posting Policy
This comment may appear on your public profile. Public Profile FAQ