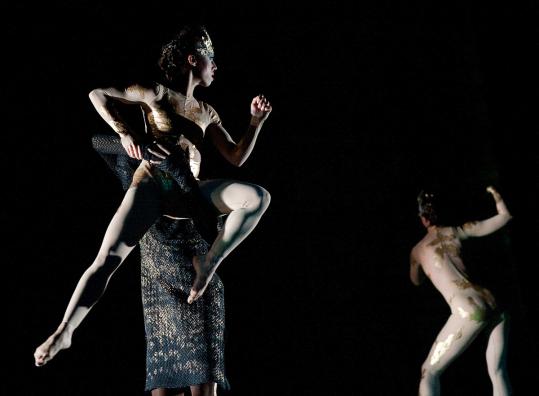 Wife and husband team zoe|juniper’s “A Crack in Everything’’ at Jacob’s Pillow in Becket. (Christopher Duggan)
By Janine Parker Globe Correspondent / July 23, 2011

BECKET - Choreographer Zoe Scofield and visual artist Juniper Shuey are young people with big visions, necessary and hopeful ingredients for the future of any field. At Jacob’s Pillow, zoe|juniper, the wife-and-husband team’s Seattle-based company, is now presenting the world premiere of “A Crack in Everything,’’ an abstract, evening-length work that had Pillow support through a Creative Development Residency last fall.

Inspired partly by the relentless cycle of violence as depicted in Aeschylus’s trilogy of plays known as the Oresteia, “Crack’’ blurs the lines between what is horrible and what is beautiful. Shuey’s projections, along with Robert Aguilar’s at times startling lighting design, also raise questions: Are the dancers underwater or above the clouds; are they innocents emerging from the primordial mud or experienced cynics trying to hold on in an icy future?

A tranquil setup greets the incoming audience: The stage is barely discernible behind a glazed, milky drop ashimmer with blue dots, with a hushed yet restless sound of wind in the trees. But there is an uneasily nihilistic world waiting to be unveiled, layer by layer. The front drop turns out to be two: one a gauzy material, the other like a sturdy see-through shower curtain. Scofield and her four strong dancers are likewise costumed in a smoke-and-mirrors manner, sometimes wearing metallic-looking long-sleeved black tunics, sometimes appearing naked, with flesh-toned body stockings streaked here and there with gold paint or material, just barely covering breasts, bottoms, and genitals.

The blend of illusion and reality that informs perceptions of time and memory is also a motif in “Crack.’’ Sometimes film of dancers is projected, acting as doppelgangers to the performers on stage; sometimes a dancer is twinned with such a projection, then tripled, another dancer suddenly illuminated just upstage. These effects are terrific, and the piece could benefit from further exploration of them.

It could also benefit from more Scofield, too, or at least more of the wonderful wild child that makes her movement style so striking and so compelling. (Disclosure: Over a decade ago, Scofield and I danced one season together with the local Prometheus Dance.) She can be both vulnerable and menacing, and she makes something deeply human out of her mixture of purposefully gangly movement and awkward tension. Though it will sound strange to suggest about a piece with a scene in which two dancers sit in chairs barking at each other, there is something that feels restrained; there is too much theme, and not enough variation in some of the sections, which feel overly drawn-out as a result.

If Scofield and Shuey edit and expand upon this ambitious work, it will be intriguing to see. They could allow both for more subtlety in some sections - particularly Matt Starritt’s sound design, which plays the ambient-sound-building-to-unbearable-volume card too often - and more peril in others. What would happen if they investigate the “cracks’’ of the piece further, and pull it wide apart?

Big ideas deserve big risks, and Scofield and Shuey seem to have the guts to create some glory.