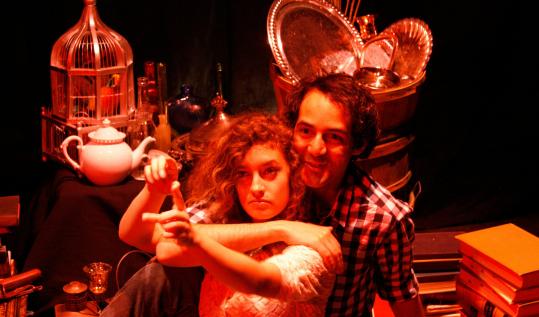 Is there a sexier tale than Scheherazade’s 1,001 nights - how she beguiled her royal husband, Shahriyar, with stories of Sinbad and Aladdin and Ali Baba to keep him from cutting off her head? Scheherazade has found her way into film (notably the two versions of “The Thief of Baghdad’’), dance (Michel Fokine’s ballet for the Ballets Russes), and classical music (Rimsky-Korsakov’s symphonic suite). Jason Grote’s 2007 play “1001’’ would seem to mark her entrance into postmodern theater, with the actress playing our Persian heroine doubling as modern-day Palestinian woman Dahna and the actor playing Shahriyar doubling as Dahna’s New York Jewish boyfriend, Alan.

And that’s just the beginning. Grote juggles Osama bin Laden, Gustave Flaubert, and Alan Dershowitz in a network of interlocking unfinished stories that would have left Jorge Luis Borges scratching his head. (In fact, Borges makes an appearance here as well.) The play is getting its Boston premiere from Company One at the Boston Center for the Arts, in a production directed by Megan Sandberg-Zakian that largely does justice to Grote’s dizzying mind games.

Most of the rest of the play concerns Dahna and Alan, their story told in discrete parts, and not always the same way. (“Part IV, again, with variations,’’ our One-Eyed Arab host announces.) A length of blue silk that needs to be - but usually is not - as indigo as the desert sky at dusk has a continuing role; also prominent are the Crusades, a lamp with a djinn, instant text messaging, Sinbad’s discovery of Ikea, and a Manhattan enormity that dwarfs 9/11. One particular oddity is that Shahriyar talks like Norm Crosby: “Thank Alan!’’ he says, then, “um, Allah.’’

Cristina Todesco’s set for Company One resembles a dark man cave sans big-screen TV but with nine coral-colored hassocks that can form a bed, a bier, and everything in between. Saturday night, the piece started out broad and loud, with Lauren Eicher strident as Scheherazade, Nael Nacer callow as Shahriyar, and Ruby Rose Fox a little hysterical as Shahriyar’s virgin bride and Scheherazade’s sister Dunyazade, but everyone eventually settled into more subtle performances.

Ben Gracia anchors the proceedings as a sly, insinuating One-Eyed Arab (he is also the djinn and the voice of Dershowitz). Eicher and Nacer are sweet and engaging as Dahna and Alan. Fox has sexy turns as the prince’s twin sister and a slave girl and a comic one as Dahna’s sister Lubna. Hampton Fluker is ardent as the prince and unctuous as Dahna’s text-messaging partner. And Lonnie McAdoo is amusingly obsequious as Scheherazade’s father and quiveringly exuberant as Borges. “As usual, I obscure more than I illuminate,’’ his Borges tells us. Well, yes - but doesn’t every good story?