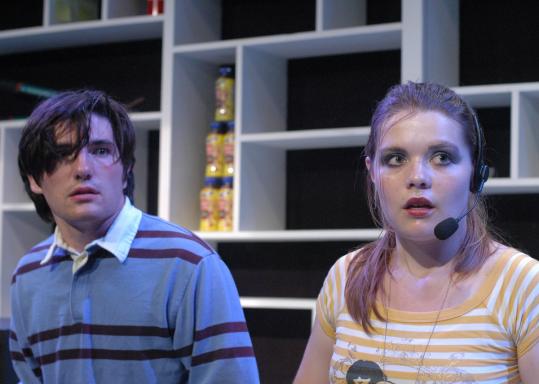 WELLFLEET - In his 2005 bestseller “Everything Bad Is Good for You,’’ Steven Johnson argued that the complexity of video games presents an array of cognitive challenges that can make players smarter and better able to navigate the hairpin turns of modern life.

A rather less rosy outlook governs Jennifer Haley’s “Neighborhood 3: Requisition of Doom,’’ to put it mildly.

It’s not that the group of suburban teenagers at the center of “Doom,’’ now at Wellfleet Harbor Actors Theater under the direction of Jesse Jou, aren’t plenty smart and quick-thinking. The problem is that they use those skills to kill, having been drawn so deep into the online horror video game of the title that the border between the virtual world and the real world has disappeared. There’s no returning to everyday life for these teens - or their unlucky parents.

That may make “Doom’’ sound like a finger-wagging jeremiad about the Evils of the Internet, but Haley’s stance is more sophisticated than that.

Though she alludes in the play to a real-life case where one teenager murdered another under the apparent influence of video games, she’s not just ripping material from the headlines. The playwright, who received an MFA from Brown University and studied under Paula Vogel, demonstrates a firm grasp of gaming culture. At its best, “Doom’’ has the kind of level-by-level intricacy that can make multiplayer games (not to mention theater) so compelling.

However, the characterizations of the players are thin, the acting in the WHAT production is spotty, and the play’s structure is ultimately too schematic and lacking in scope. Though she has a gift for atmospherics, Haley relies too heavily on the cliches - vaguely alienated kids, cartoonishly clueless grown-ups - of a thousand horror movies.

If the playwright had taken us deeper into the yearnings of her youthful characters, she could have made us understand what they’re running to, not just what they’re fleeing. “Doom’’ might then reverberate like one of Rod Serling’s sci-fi parables. But by the time we meet the kids, they have the numbed-out aura of junkies, their addiction being the online game they seem to play around the clock.

The game plunges them into a subdivision that is a replica of the one they live in. Like their neighborhood, the virtual one is governed by a neighborhood association. The challenge for players like Blake (Cody Beltis), Chelsea (Kaitlin Varkados), and Jared (Dustin Teuber) is to get out of this stifling subdivision, but that will require teaming up to annihilate the zombies who are trying to prevent the teenagers from escaping.

As Chelsea’s father (Victor Warren) points out to one of the mothers, played by D’Arcy Dersham: “They’re running around a neighborhood that looks very much like ours, butchering zombies who look a whole lot like us.’’ Pretty soon, the real neighborhood and the virtual neighborhood are indistinguishable. Actions taken in one have consequences in the other.

The WHAT production is most effective in the scenes where the teens - seeming half like robots, half like commandos on a secret mission - move in lockstep to obey the sinister commands of an unseen, creepy-voiced figure. At one point, the voice intones: “As you approach the house, you will see on the sidewalk a claw hammer. Pick this up. You will need it later.’’

As “Doom’’ unfolds, our gaze returns constantly to the other seemingly ordinary but potentially lethal items that are arrayed on the white wall storage shelves of designer Ted Vitale’s set: a weed-whacker, a circular saw, a golf club, a baseball bat. But near the play’s end, another object acquires a sinister aura. It’s an object that is utterly ubiquitous today (I’m typing on one now).

Whether you generally believe that this particular object is good for you or bad for you, it’s hard, when watching “Neighborhood 3: Requisition of Doom,’’ not to second the emotion when one of the mothers cries out to one of the youths: “Get up from your computer!’’