Lecavalier is still an energetic force 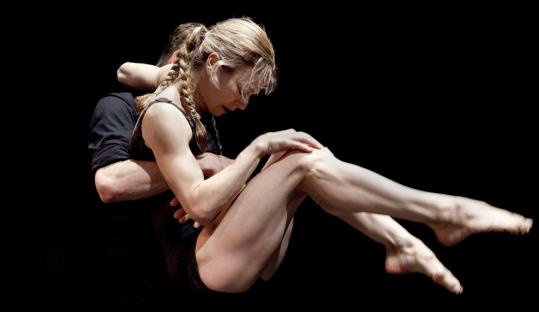 BECKET - It’s often thought that dance is a young person’s field, but this is only partly so: Louise Lecavalier, who danced with Édouard Lock’s company La La La Human Steps for nearly two decades, is performing at Jacob’s Pillow with the truth and beauty that can only be gleaned through a lot of living.

It’s tempting to say that Lecavalier dances with abandon, but abandon suggests giving oneself up, whereas every cell of her seems to reach out, without fear or reserve. Though she is tiny, her form of dance is extremely weighted, sweaty, and tactile, but the way she interacts with the air, or the ground she flings herself onto, or the partner she hurtles into, is striking. It seems as though the space around her is bent and shaped by the very force of her; it meets and envelops her.

Nigel Charnock’s 2009 “Children,’’ the first of the program’s two works, is not about children but about two adults - Lecavalier and Patrick Lamothe, her worthy partner - struggling to manage their passion without destroying each other. The music consists of a series of songs by singers from Billie Holiday to Janis Joplin, interrupted occasionally by the opening notes of an aria that, because the record is skipping, becomes a plaintive wail. This wail is like a siren in the couple’s relationship, the warning that the relationship is souring, the skipping suggesting a recurring theme.

The title, Charnock’s program note, and some of the choreographic motifs are wistful remonstrances: If we could only retain that sense of play, if only neurotic impulses could be kept at bay. But the very presence of passion suggests the possibility of reconciliation, for you can love or hate someone with passion, but you can’t be indifferent with passion.

Memory is provocative for all of us, and poignantly so for dancers. “A Few Minutes of Lock,’’ a series of excerpts from dances choreographed by Lock, is Lecavalier’s exploration of that intangible sensation known to dancers as muscle memory. What will this movement from earlier in her career be like on her now, she wonders. The heartfelt standing ovation she received at the end contained her answer.