Skating back to the scene of the rivalry 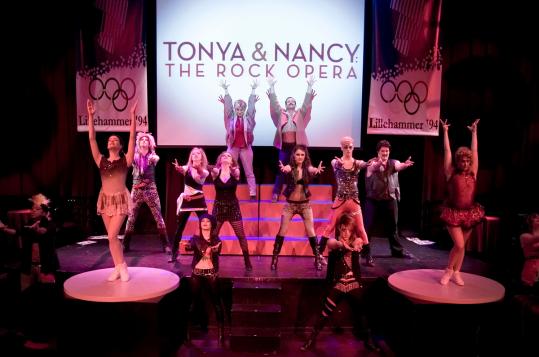 The news that Tonya Harding and Nancy Kerrigan are back in the spotlight together may inspire a moan of “Why? Why? Why?’’

But wait, this is “Tonya & Nancy: The Rock Opera.’’ The show, which comes to Oberon Monday through Thursday, harks back to 1994, when the figure-skating rivalry between Massachusetts-bred star Kerrigan and Oregon bad girl Harding erupted into one of the first great celebrity train wrecks of the modern tabloid era. When Kerrigan was whacked on the knee with a metal baton just weeks before the Winter Olympics, in an attack planned by members of Harding’s camp, her repeated wails of “Why?’’ became the signature soundbite of weeks of heavy news coverage.

“I was obsessed with this Tonya and Nancy story from the very beginning,’’ says librettist Elizabeth Searle, of Arlington.

“This whole culture is obsessed, for better or worse, with these celebrity scandal tabloid stories. And my own feeling is, as a writer, it’s kind of your job, in a higher sense, to plug into your culture at the moment,’’ she says. “I feel as a writer I’m holding a divining rod trying to find the sources of energy. And my divining rod quivers with this material. It’s charged material.’’

Tonya and Nancy figured in her 2001 story collection ‘‘Celebrities in Disgrace,’’ and in 2006 she collaborated with her niece, composer Abigail Al-Doory Cross, on the 30-minute chamber opera “Tonya & Nancy: The Opera,’’ which premiered at the same Cambridge venue when it was known as Zero Arrow Theater.

“It seemed to me a natural subject for an opera, because it has the operatic emotions, the whining, the jealousy, the violence, the longing for attention,’’ Searle said. “I felt like it could be an opera for our times.’’

That version has been produced a few times - including partly on ice in Minnesota last year, Searle says. Meanwhile, the creators were also talking with Triangle Productions of Portland, Ore., Tonya’s hometown, about a longer version. They decided a rock musical was the way to go, and they found Los Angeles composer and Berklee College of Music graduate Michael Teoli, another Boston-area native.

“We’re really trying to put the rock back in the rock opera,’’ says Teoli. “A lot of things that call themselves rock operas are a little light on the rock element and more musical theater. . . . It’s almost a metal musical.’’

The rock opera has been produced on stage several times since it debuted in 2008 in Oregon. Looking for new venue possibilities, the creators brought it to Oberon for three performances in January to test out what they’re calling the “club version.’’ That means a slightly shorter show (60 minutes instead of 90) in which they use the whole venue, including having the actresses “skate’’ around the club atop large cubes pushed around by members of the chorus.

When the chamber opera premiered at Zero Arrow, Sergeant was pursuing an opera career and sang the role of Tonya. Now the Manchester-by-the-Sea native is singing with jazz bands in New York and appearing in musicals, and she has switched roles.

“They’re similar in that both have demons, but Nancy’s are more in her head,’’ Sergeant says. “She has to fight the inner voices telling her she can’t do it, that she’s a screw-up, blah blah blah. Tonya, on the other hand, has to deal with actual people telling her that.’’

The two skaters’ reactions to the show are predictably different. Harding came to the Portland premiere, Searles says, and went out with the cast afterward: “She played video poker all night.’’

Kerrigan, who won a silver medal at the Olympics a few weeks after the attack, is aware of the show but hasn’t seen it, Searle says. “Tonya & Nancy: The Rock Opera’’ makes no mention of the recent Kerrigan family tragedy that thrust Nancy back into the news. “We just wish her the best,’’ Searle said.

The show is as much about our tabloid culture as it is about two women, Searle says. The chorus often turns into a pack of slavering reporters.

“People are obsessed with these stories, and they read a lot of them in a very surface way, and then there’s this sort of longing to go deeper. Why does this fascinate us? What would it be like to be these characters? What does this story say about us?’’ Searle said.

Post-9/11 America Company One takes a probing look at America and the world a decade after 9/11 in the Boston premiere of Jason Grote’s play “1001.’’

Performances begin tonight at the Boston Center for the Arts. The work includes a contemporary romance between an Arab woman and a Jewish man and reinvented “Arabian Nights’’ tales. Megan Sandberg-Zakian directs a cast that includes Lauren Eicher, Hampton Fluker, Ruby Rose Fox, Ben Gracia, Lonnie McAdoo, and Nael Nacer. Tonight through Aug. 13 at the Plaza Theatre, Boston Center for the Arts. Tickets: $30-$38, at 617-933-8600, www.bostontheatrescene.com.