Ribot has scored ‘The Kid’ for subliminal effect 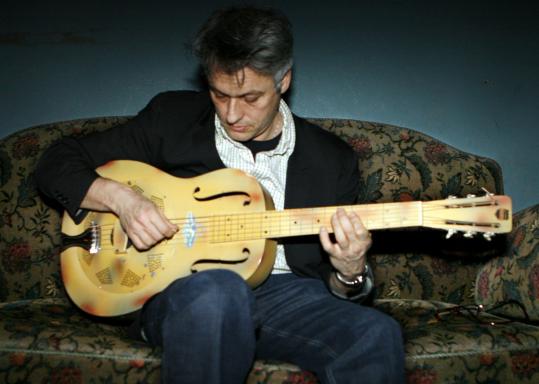 Marc Ribot will perform during the screening of Charlie Chaplin’s 1921 silent movie “The Kid’’ tonight at Mass MoCA. Below: Chaplin and costar Jackie Coogan in “The Kid.’’ (Marco Zanoni/File 2006)
By Jeremy D. Goodwin Globe Correspondent / July 9, 2011

The creatively omnivorous, experimental guitar master has been known to stomp on a balloon onstage when the composition calls for it, but when he accompanies a screening of Charlie Chaplin’s 1921 silent film “The Kid’’ with a live score on solo guitar Saturday at the Massachusetts Museum of Contemporary Art in North Adams, Ribot says his goal is to work on the audience subliminally.

“I don’t want it to be heard as a concert. I want to disappear, which is what good film scoring does,’’ he says, on the phone from his home in the Cobble Hill section of Brooklyn, N.Y. “If the effect is done perfectly, people will think they’re seeing what they’re, in fact, hearing. It’s a kind of alchemy.’’

Ribot has made a practice of musical alchemy over more than 25 years recording and performing. His resume as one of the most in-demand session men in the business - credits include work with Tom Waits, Robert Plant and Alison Krauss, and Elvis Costello - complements his work as a shape-shifting trailblazer within New York’s forward-thinking downtown music scene. (He and fellow avant-guitar hero Nels Cline share the cover of the current issue of DownBeat magazine.) Over a dozen current projects are listed on his website, divided by categories as disparate as “free jazz,’’ “punk/funk/soul/noise’’ and “latin descarga.’’ (It’s a song from John Zorn’s “The Book of Heads,’’ by the way, that requires the destruction of balloons.)

Tonight’s performance brings together Ribot’s long-running interest in film scoring with the visceral, in-the-moment improv for which he is probably better known. The score is not “through-composed,’’ he clarifies, but a series of themes he weaves together in an extended improvisation. The titular theme from his score for “The Kid’’ appears on his 2010 album “Silent Movies,’’ a collection of self-contained pieces meant to be suggestive of films.

“It was a kind of musical image-making or musical storytelling, as an analog for a movie. The songs are movies,’’ he says in a quiet, deliberate tone. “I’m interested in that kind of crossover both ways, of sounds that create images and images that suggest sounds.’’

“The Kid’’ was Chaplin’s first feature-length film, begun just three weeks after the death of his newborn child, and he poured into it plenty of autobiographical anxiety stemming from that episode and his upbringing in the slums of London. It opens with an unmarried mother abandoning her baby; Chaplin’s signature Little Tramp character finds the child in an alley and raises it as his own. Several comic misadventures later, the boy (played by a 5-year-old Jackie Coogan, in the role that made him one of the first international child stars) is deemed an orphan and taken away by the state. A reunion ensues, but only after some sharply poignant melodrama.

“The silent comedians who came of age in the ’teens realized that when you move to feature length, you had to have in your repertoire more than the ability to do a pratfall or have a custard pie ricochet off your face,’’ says Thomas Doherty, professor of American studies at Brandeis University, on the phone from South Korea where he is teaching a class on Hollywood history. “Chaplin, with ‘The Kid,’ was the first to make that transition. What’s so extraordinary about Chaplin is his ability to pivot you from belly laughs to heartbreak in a nanosecond.’’

Ribot’s music for “The Kid’’ debuted last year, originating as a commission for the New York Guitar Festival; he has played it live fewer than 10 times. It makes no musical reference to the Chaplin score; Ribot is more interested, he says, in making a point about the film’s contemporary relevance, post-financial meltdown.

“When I first saw [the film] on TV in the ’60s, for me it was as old as ancient Rome. It was describing this world of drastic poverty and bleakness that was very much unlike where I grew up in prosperous, 1960s America - and yet it was only 30 years away,’’ recalls Ribot, who was brought up in suburban New Jersey. “Now it seems contemporary. It doesn’t seem like part of some irretrievable past. I think it’s dawned on more than one person that they could wind up as the little tramp.’’

Ribot’s score is largely improvised, but there’s nothing haphazard about it. It still must imply an emotional narrative to lead the audience through the film. He says this inherent requirement of film scoring leads him to express a variety of emotional content absent from his other work.

“I noticed that when I was doing film scoring, I was tending to use a certain kind of lyricism that seemed beside the point in other work I was doing. It is almost a taboo,’’ Ribot says. “You need to create links. The themes are what makes it work - the repetition and development over time. . . . Lyricism is one way to do that.’’

Jeremy Goodwin can be reached at jeremy@jeremydgoodwin.com.

CHARLIE CHAPLIN’S “THE KID’’ WITH LIVE SCORE BY MARC RIBOT