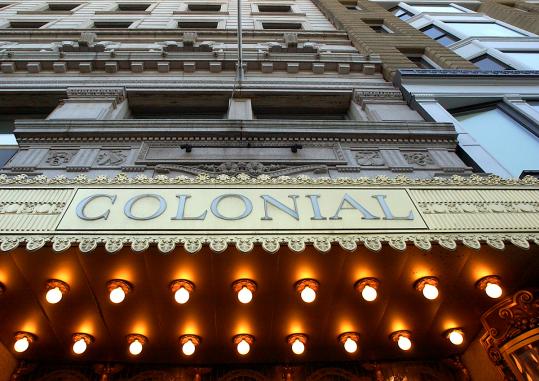 The Colonial Theatre will shut this weekend. Emerson College, which owns the theater, has not secured a tenant. (David L. Ryan/Globe Staff/File)
By Geoff Edgers Globe Staff / July 6, 2011

The Colonial Theatre, famous for its golden ceiling, ornate murals, and excellent sight lines, is set to go dark this weekend - and nobody knows for how long.

Boston’s oldest continuously operating theater has weathered world wars, economic downturns, and changing tastes. But it now faces an unexpected shutdown because of failed negotiations between Emerson College, which owns the Colonial, and Broadway Across America-Boston, which has presented such popular touring musicals as “Mamma Mia!’’ and “Sweeney Todd’’ while leasing the 1,704- seat theater over the last decade.

“It’s sad,’’ said Emerson College’s president Jacqueline Liebergott last month, a day before her retirement. “I’d like the theater not to go dark for one minute.’’

Emerson says it is continuing to negotiate with prospective tenants and remains committed to performances at the Boylston Street theater, which opened in 1900.

But no shows are scheduled after the touring production of “West Side Story’’ wraps its run at the Colonial on Saturday. And Emerson and Broadway Across America-Boston are offering competing explanations of where the negotiations went awry.

Both sides agree on what happened in January 2010. That’s when Broadway Across America-Boston, anticipating that its Colonial lease would end on Aug. 31, 2011, approached Emerson for a new deal. The college told its longtime tenants that it first wanted to explore other potential producers to lease the theater.

“Of course, nobody wants to see it go dark,’’ said Rich Jaffe, Broadway Across America-Boston’s vice president, of the Colonial. “But you get to the point where you have to find a venue for your productions.’’

For the Citi Performing Arts Center, the arrangement is a boon. The Shubert is home to Boston Lyric Opera, but the theater is often dark and had no Broadway touring shows this year. The upcoming season will be different. In December, the Shubert will feature two weeks of Broadway Across America-Boston’s presentation of “La Cage Aux Folles,’’ and in February, there will be two weeks of “The Addams Family.’’

“This is a way, with less and less shows going on the road, in which two presenters could find a way to present together,’’ said Josiah Spaulding Jr., chief executive of the Citi Performing Arts Center.

Though Emerson and Broadway Across America-Boston officials each praised the other in recent interviews, Christopher Welling, who represents dozens of union stagehands at the Colonial, said negotiations were tense between the two.

Drew Murphy, the former head of Broadway Across America-Boston, told Welling in 2010 of his frustration with Emerson, said Welling, president of the International Alliance of Theatrical Stage Employees Local 11 in South Boston.

Last summer, as Emerson looked to bring in another presenter, discussions began with a familiar name in the Boston theater community, Jon B. Platt. A veteran Broadway producer whose shows have won five Tony Awards, Platt ran the Colonial before Broadway Across America-Boston, helping raise money for renovations made in the 1990s.

Welling said he was at a meeting in which Platt and Emerson officials argued over who would pay the nearly $750,000 price tag for a required upgrade of the Colonial’s sprinkler system. In the end, Emerson is picking up the tab for the work, which will take place when the theater is dark in August and September.

Platt declined to say whether he is still in the mix as a prospective Colonial tenant. In an e-mailed statement, Platt wrote, “For Boston to lose The Colonial Theatre as a home for Broadway shows would indeed be a tragic day in the cultural life of our beloved city.’’

Welling, who represents 50 to 150 stagehands working during shows at the Colonial, said he is disappointed Platt and Emerson did not reach an agreement. (The stagehands are not actually losing jobs; they will simply shift from the Colonial to the Shubert and the Opera House.)

Welling, whose career started in 1978 at the Colonial, where he became house carpenter from 1993 to 2004, blames Emerson for the failure to strike a deal.

“The trouble is Emerson never really cared about the space,’’ said Welling. “It is one of the most beautiful theaters in the United States. There’s no reason a padlock should be put on this place.’’

But Liebergott said Emerson cares deeply about the space and remains in promising negotiations with potential tenants. She would not offer specifics. Emerson officials have been saying they are close to a deal for months, but without resolution.

City officials do not seem concerned. Mayor Thomas M. Menino did not respond to a request for comment. A spokesperson for the Boston Redevelopment Authority said the agency had spoken with Emerson officials and was comfortable with its plans for the space.

Though Emerson’s recently created producing arm, ArtsEmerson, has emerged as a major player on the local theater scene, ArtsEmerson already programs the Cutler Majestic Theatre and the Paramount Center. The college has no interest in adding the Colonial to the ArtsEmerson roster, an Emerson spokesperson said.

“Our only real interest is to find a quality tenant and keep the theater open,’’ said Liebergott.

Though Jaffe said he hopes to work again with Emerson, he said it makes more sense to rent space production by production than to be locked into a long-term lease.

How long will the Colonial be without a tenant?

Veteran Boston-based theatrical producer Spring Sirkin believes the theater will not be dark for long.

“It’s just too valuable, the premiere stage we have,’’ said Sirkin. “It’s also a good thing for the Shubert. Hopefully, it’s a win-win for Boston.’’

But Spaulding, Broadway Across America-Boston’s new partner, believes that there may not be enough people coming to shows to warrant keeping all of the city’s theaters open.

“Sometimes, we end up having too many seats,’’ said Spaulding. “There is just not enough product to keep all of our theaters going 365 days a year.’’