The Rose will remain open, not sell its works 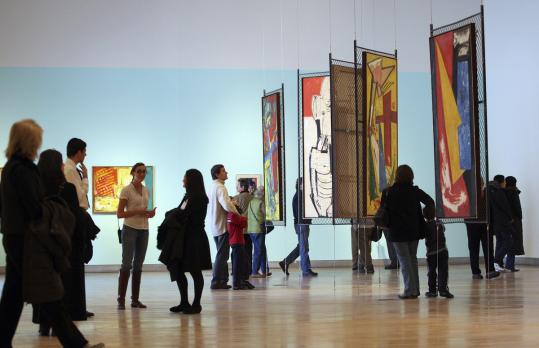 Brandeis University will keep the Rose Art Museum open and sell none of its prized collection, according to a court settlement announced yesterday. The deal effectively ends the bitter two-year battle over the museum’s fate and opens the door to future exhibitions and the hiring of a new director.

“My statement to the art world is that we have affirmed the important role of the Rose at Brandeis, and we not only invite their participation, we welcome it. In fact, we’re counting on it,’’ said Brandeis president Frederick Lawrence, who called the Rose “the best contemporary art collection in New England.’’

Also praising the settlement yesterday were Rose supporters who sued Brandeis in 2009 after the school announced it would respond to a university budget crisis by clos ing the museum and selling the collection, valued at about $350 million and with works that include Willem de Kooning, Jasper Johns, Morris Louis, and Helen Frankenthaler.

“I am confident that they understand and cherish this collection,’’ said Jonathan Lee, a longtime Rose supporter and plaintiff in the lawsuit along with Meryl Rose, Lois Foster, and Gerald Fineberg. Lawrence “is not going to let the collection be shuffled off.’’

Lawrence inherited the museum dispute in January after taking over from Brandeis president Jehuda Reinharz. It was Reinharz who announced in January 2009 that Brandeis would shut down the Rose and sell its 7,500-piece collection.

Museum leaders, art critics, and the Rose’s supporters attacked the decisions. Students held protests. Museum director Michael Rush, informed of the plan after it had been approved by Brandeis trustees, was recast as a crusading art-world folk hero. But Rush’s contract was not renewed.

Reinharz eventually put the university’s Rose plans on hold to examine other options for budget relief, but the lack of a legal reassurance left the museum in limbo. Artists scheduled for exhibitions pulled out. The museum was unable to find a successor to Rush.

The settlement should allay concerns, with the Rose moving forward on an approximately $1.5 million renovation, a director search, and plans to organize traveling exhibitions.

“It means that that nightmare is behind them, and it’s great to see Brandeis and the Rose back in the conversation and part of the family again,’’ said David Ross, the former director of the Institute of Contemporary Art and Whitney Museum of American Art. “I have no doubt that now the Rose will be able to attract a first-rate director. Before it would have been only somebody desperate for a job.’’

The Association of Art Museum Directors harshly criticized Brandeis after its initial plan was announced and told university officials at the time that they would face sanctions if they went ahead and sold any art from the collection to fund school operations.

“With their affirmation of their commitment, the entire situation has changed,’’ said Dan Monroe, director of the Peabody Essex Museum and president of the directors’ association. “It changes their capability to attract new leadership and their capability to carry out new exhibitions and programs. “

The settlement and subsequent decision by the state attorney general’s office to drop a review of Brandeis are important steps for the university. Officials had been saying for some time that they were not still interested in selling art and recognized the missteps taken in the initial plan. A year ago, Brandeis signed a deal with Sotheby’s auction house to explore ways to raise money from the collection by loaning or renting works.

But Rose supporters demanded a written guarantee because, they said, they could not trust the school. And that was what was finalized this week.

“That was all I wanted,’’ plaintiff Meryl Rose said of the written promise.

In fact, Lawrence’s approach has created a level of trust, said plaintiff Lee. Last year, Lee strongly opposed the possibility of working with Sotheby’s. Yesterday, he said he still did not like the idea but trusted Lawrence.

“You don’t get everything you want in a settlement,’’ Lee said.

Lawrence talked enthusiastically yesterday about the Rose’s approaching 50th anniversary. He said that one of his first acts as president had been to contact the plaintiffs on the lawsuit and talk to them about the school’s plans. He declined to criticize Reinharz, who resigned last year after leading Brandeis for more than 15 years, but said the Rose fits in perfectly with Brandeis.

“This is a place born of the mid- [to] late-20th century of America, and you feel it when you walk the campus,’’ he said. “The Rose is a big piece of that.’’

Lawrence said that he is looking forward to the fall reopening of the Rose after the renovation, which, among other items, calls for installing a new HVAC system, energy-efficient glass, and new ceilings. He said he would not rule out expanding the museum in the future. He expects the Rose’s audience to grow.