Out on a limb with 'Discovery of Honey' 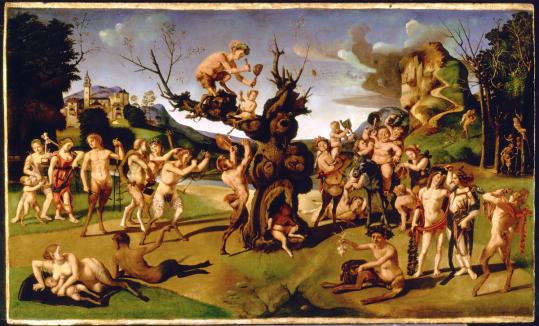 WORCESTER — Piero di Cosimo, who painted this enchanting picture, doesn’t quite fit into the parade of Renaissance greats like Botticelli, Michelangelo, Leonardo, or Raphael.

Granted, they all had their eccentricities. But Piero, if we are to believe the Renaissance biographer Giorgio Vasari, was a genuine oddball. He disliked hot food and lived on hard-boiled eggs, which he cooked in large batches then stored in a cupboard. His studio was a shambles. He let his garden run wild and, and wouldn’t even pick the fruit from his trees because he hated to “interfere with nature.’’

A bachelor until his death at 60 in 1521, he took long walks by himself while building, in Vasari’s words, “his castles in the air,’’ and he loved everything in nature that seemed strange and idiosyncratic. (One feels sure, from such descriptions, as much as from the evidence of his pictures, that he would have loved the 19th-century Jesuit poet and author of “Pied Beauty,’’ Gerard Manley Hopkins.)

This painting at the Worcester Art Museum is related to a similar, unfinished-looking work in the Harvard Art Museum, called “The Misfortunes of Silenus.’’ Both pictures, and probably some others, were painted by Piero for the Vespucci family at the very end of the 15th century and displayed in a house formerly owned by the Medici family.

The painting shows an adult and baby satyr on the main branch of a gnarled old tree and another satyr below, all making a loud din with household utensils in order to encourage bees to settle in the tree. The story, which culminates in the discovery of honey, derives from Ovid’s poem “The Fasti.’’

On either side of the central tree (it’s matched by a similar tree in the Harvard picture) we see a crowd of couples and revelers: On the right, there’s the tubby old Silenus smiling atop his donkey (he is more the center of attention in the Harvard picture), and in the foreground the handsome Bacchus with his arm around the goddess Ariadne.

The purpose of Ovid’s original poem, as Erwin Panofsky explained in the first serious interpretation of the painting, is to account for the origins of Roman holidays and customs. Bacchus is in the picture for a simple reason: After his followers made a noise which attracted the bees, it was he who trapped them in a hollow tree. Honey was his prize, and that is why, according to Ovid, the rites of the Feast of Bacchus include the eating of sweet cakes known as “liba’’ (their name derives from Bacchus’s Latin name, “Liber.’’)

The story illustrates an episode in the evolution of man. It’s given a dramatic frame by two background details: on the left, a serene hilltop town, symbolizing civilization; and on the right, a higher rocky outcrop, with threatening weather, symbolizing wild and threatening nature.

Clearly a lover of nature, Piero was allegedly terrified of lightning but loved heavy rains.

Sebastian Smee can be reached at ssmee @globe.com.

THE DISCOVERY OF HONEY BY BACCHUS Piero di Cosimo