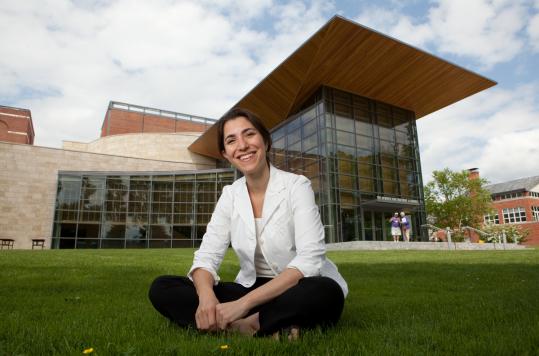 Jenny Gersten, who was associate producer of the Williamstown Theatre Festival from 1996 to 2004, returned last October in the lead role of artistic director. (Matthew Cavanaugh for The Boston Globe)
By Laura Collins-Hughes Globe Staff / June 19, 2011

WILLIAMSTOWN — A lot of the bodies are different, and a gleaming, glass-front performing arts center has replaced the old stages that Jenny Gersten knew.

But at the nerve center of Williamstown Theatre Festival, in the Williams College classrooms that are converted each summer into the festival’s administrative space, one olfactory element has remained decidedly familiar since she resigned from the organization seven years ago.

“There’s a little bit of, like, a manure smell,’’ said Gersten, the 42-year-old New Yorker who last October returned to the storied festival, succeeding Nicholas Martin as its artistic director. She laughed. “I don’t hate the smell. But I was like, oh, that’s the smell of this office. And that is the smell of my summers here.’’

For Gersten, it’s been a circuitous route back to this place in the Berkshires that she loves so fondly and left so unhappily. Her first summer as artistic director is her 10th at Williamstown, where from 1996 to 2004 she was associate producer, the right-hand woman to head honcho Michael Ritchie. When he left for Los Angeles, he encouraged her to apply for his job. Passed over in favor of actor Roger Rees, she exited as well, crushed.

Rees lasted three years in the job, Martin likewise. When the festival approached Gersten about applying to be Martin’s replacement, she did not leap at the chance.

“I said, ‘No way,’ ’’ she recalled the other afternoon, meticulously put together in white jacket and top, slim black pants, and wedge sandals that revealed toenails painted a shimmering blue. “I said, ‘I’m not interviewing. I can’t go through that again. It was too brutal.’ And I said, ‘I have real reluctance about coming back.’ Because it was a very painful thing to get rejected that first time.’’

Ultimately, of course, Gersten did risk a second rebuff from the festival, which occupies a significant chunk of her professional and personal history. It is, she said, the place where she “showed up a single lady and left with two kids and married.’’

Altered chemistry “She’s just incredibly cool,’’ director David Cromer said over the phone from New York, where he was packing more stuff to take back to Williamstown and scrounging for laundry quarters to use there. “She’s really smart, and nothing seems like a big deal, and a problem comes up and she makes it go away.’’

Gersten, the subject of Cromer’s appraisal, also habitually has “a really pleasant smile’’ on her face — a soothing trait he said she shares with her father, Bernard Gersten, the longtime executive producer of Lincoln Center Theater.

“That puts people at ease,’’ Cromer explained. “People on the creative team are often very jumpy.’’

Gersten has brought Cromer back to the festival for the first time since 2000, when he made his debut there with the Austin Pendleton play “Orson’s Shadow.’’ In the intervening decade, one of Chicago’s most innovative directors has become one of New York’s hottest. Last fall, he won a MacArthur “genius grant,’’ and right now on Broadway, Ben Stiller is starring in Cromer’s revival of John Guare’s “The House of Blue Leaves.’’

On Wednesday, the festival will open with Cromer’s production of “A Streetcar Named Desire,’’ starring Jessica Hecht as Blanche and Sam Rockwell as Stanley on the Nikos Stage.

The main stage will open June 29 with Jon Robin Baitz’s “Three Hotels,’’ starring Boston native Maura Tierney and Steven Weber. It’s directed by Tony Award-winning festival first-timer Robert Falls, artistic director of Chicago’s Goodman Theatre, who said he and Gersten worked together “producer to producer’’ when she was at the Public Theater.

But it’s the 170-seat Nikos whose chemistry Gersten has altered by adding unconventional revivals of classics to the customary lineup of new plays. It’s an artistic decision propelled in part by what she said is her big challenge: figuring out how best to use the ’62 Center for Theatre and Dance.

Designed by Boston’s William Rawn Associates, the Williams College performing arts facility opened in 2005, the year after Gersten left the festival. It took the place of the festival’s original main stage, the Adams Memorial Theatre, as well as its old Nikos Stage, a 96-seat venue that consistently sold out, Gersten said.

The main stage at the ’62 Center seats 520 people, just as the old one did, and the additional capacity of the second stage seemed like an opportunity to pack a larger house.

“We thought, back in 2004 when we were working here,’’ she said, “that it would be a very seamless shift’’ into the new complex. But audiences didn’t follow that script.

“The Nikos Stage no longer sells out. And it’s really changed the ecosystem of the whole place. And in fact I really do believe there are some people that said, ‘I miss the old Adams Memorial Theatre,’ and they no longer come here,’’ said Gersten, whose three-year contract with the festival began in October.

“I think the Williamstown Theatre Festival has suffered of late,’’ she added. “Just a little bit, not badly. But I think it’s been having some growing pains. And I don’t know that it’s anyone’s fault. I don’t point to the artistic leadership, other than the fact that they didn’t get to stay very long. And I think they had a hard time not knowing how this new theater was going to impact them.

“So I think we’re really interested in sort of — not bringing it back, because there’s no going back,’’ she said. “You always have to progress. But I think we’re interested in a progression that somehow retains some of the feeling of glory that we sort of associate with this place.’’

‘Four years of other’ Being an artistic director was not in the plan Gersten made for herself when she was a child, though she knew she wanted a life in the theater. At Oberlin College, she majored in archeology and art history, and she admits there was a tiny chance she might have ended up working in a museum somewhere. But mostly, college was what she calls her “four years of other,’’ meaning something other than theater.

In that, she was taking her father’s advice, which did nothing to diminish her desire to follow his career path.

“I always thought that I was gonna be a second banana, which is what my dad does,’’ she said. “I liked being the person right behind the leader that sort of said, you know, ‘Let me help you. What can I do to help you achieve your vision?’ ’’

Applying to lead Williamstown the first time around changed her goals, however, and after she left, the New York company Naked Angels recruited her as its artistic director. Next she went to the Public Theater, where she was Oskar Eustis’s associate producer — the same job her father held for years under Public founder Joseph Papp.

“That was like the completion of an education,’’ said Martin, who is slated to return to direct Oliver Goldsmith’s “She Stoops to Conquer’’ at Williamstown next month. “It was the making of a producer.’’

Martin, who spoke of Gersten with enormous affection born of the years he directed at Williamstown under Ritchie, said she has what it takes to be a good artistic director: “high intelligence, a sensitivity to artists and donors alike, and an understanding of aspiring artists — and, maybe more than anything, the energy to work 18 hours a day and expect to be awakened in the middle of the night.’’

At Williamstown, noted Martin, who was artistic director of the Huntington Theatre Company from 2000 to 2008, “the other challenges involve raising money. That’s something that I was not very good at, I admit, at any of the theaters I was with. But Jenny is.’’

Gersten’s husband, playwright and lyricist Willie Reale, founder of the 52nd Street Project theater program, and their two sons, ages 12 and 8, will be at the festival with her this summer. So will Ritchie, though not in any official capacity. He is planning to spend nearly the entire month of July at Williamstown, “to be there for Jenny, to be there for the festival.’’

“She and I are in the same foxhole,’’ said Ritchie, whose wife, actress Kate Burton, is on the festival’s board of trustees. “Until you’re running a theater, you don’t know what that foxhole is.’’

But this time the person calling the shots from the foxhole for Williamstown will be Gersten, who sees this moment as one from which the festival could go in any number of directions.

It could keep producing the revivals of classics that it’s known for, she said, or it could “become some kind of Sundance-type festival with all these great thinkers and theater practitioners and — who knows? We could do anything.’’