Arts: the week ahead 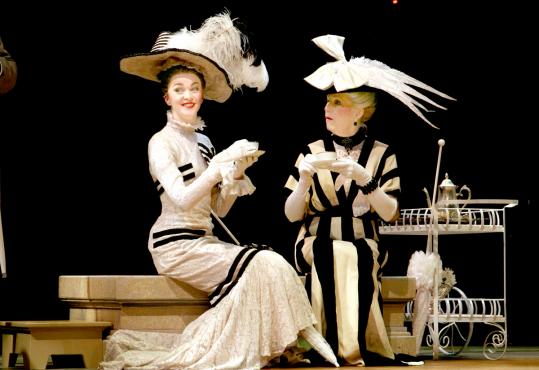 RICHARD III and THE COMEDY OF ERRORS Talk about your mood swings. Under the expert direction of Edward Hall, “Richard III’’ is a shiver-inducing portrait of a silky psychopath (the excellent Richard Clothier) who kills his way to the top. By contrast, “Comedy’’ (also directed by Hall) delivers the simple pleasures of knockabout farce. “Richard III’’ is a must-see, “Comedy’’ is a should-see. Through Sunday. Production by Propeller Theatre Company, presented by Boston University School of Theatre in Association with Huntington Theatre Company. At Boston University Theatre. 617-266-0800, www.huntingtontheatre.org

THE DROWSY CHAPERONE Karen MacDonald, Thomas Derrah, Will McGarrahan, and the rest of the cast shine in this joyously goofy — or is it goofily joyous? — musical-within-a-comedy. Through Sunday. SpeakEasy Stage Company. Roberts Studio Theatre, Boston Center for the Arts. 617-933-8600, www.speakeasystage.com

A BEHANDING IN SPOKANE A superb production, under the direction of Jeff Zinn, of a light farce in which playwright Martin McDonagh puts aside any deeper interest in human frailty and instead delivers a wild and crazy tale that’s just plain fun. Through July 2. Harbor Stage, Wellfleet Harbor Actors Theater. 508-349-9428, www.what.org

THE MOUNTAIN SONG Theater is the art of making something out of nothing, and there’s plenty of that magic in this ensemble piece by the PigPen Theatre Company, which incorporates tall tales, puppets, Appalachian-flavored live original music, and no small amount of imagination. Through June 25. Presented by Company One. At Calderwood Pavilion, Rehearsal Hall A, Boston Center for the Arts. 617-933-8600, www.companyone.org

WOMEN OF WILL: THE COMPLETE JOURNEY, PARTS I-V In this stunning, if sometimes dizzying five-part dramatic sequence, Tina Packer, along with her acting partner Nigel Gore, offers persuasive evidence that Shakespeare was always singularly concerned with women’s place in a male-dominated world. Through July 10. Shakespeare and Company, Lenox. 413-637-3353, www.shakespeare.org

COMMON BOSTON DPARTY Amid the art exhibit, music, and DJ-fueled dancing of this event, check out the dance installation within a topographic landscape of discarded library books by Emily Beattie, who creates at the intersection of dance and technology. Performers include Naoko Brown, Caitlin Ewing, Theodossios Issaias, and Kelly Onder. June 16, 6:30-10:30. $10 (free if you bring a new children’s book to donate). Massachusetts College of Art and Design’s Pozen Center. www.commonboston.org

LUCIEN AIGNER 1901-1999 This exhibit of work by the legendary photojournalist includes images of people in unrehearsed moments, such as a human pyramid on Coney Island in 1940, and a shampoo at a Harlem beauty parlor in 1936. Through July 23. Gallery Kayafas, 450 Harrison Ave. 617-482-0411, www.gallerykayafas.com

ZSUZSANNA SZEGEDI: TEMPORAL WORKS In video, sculpture, and performance, Szegedi investigates the idea of transience, and the connection between artist, audience, and the ephemerality of the art being created. Viewers become participants as they touch and interact with the work. Through June 26. Fourth Wall Project, 132 Brookline Ave. www.fourthwallproject.com

THE STRANGE LIFE OF OBJECTS: THE ART OF ANNETTE LEMIEUX A survey of works in various media touching on themes from war to the nature of time and memory. Through Oct. 9. Worcester Art Museum, Worcester. 508-799-4406, www.worcesterart.org

TWO MASTERS OF FANTASY: BRESDIN AND REDON Prints and drawings by these two 19th-century explorers of febrile imaginary worlds. Through Jan. 16. Museum of Fine Arts. 617-267-9300. www.mfa.org