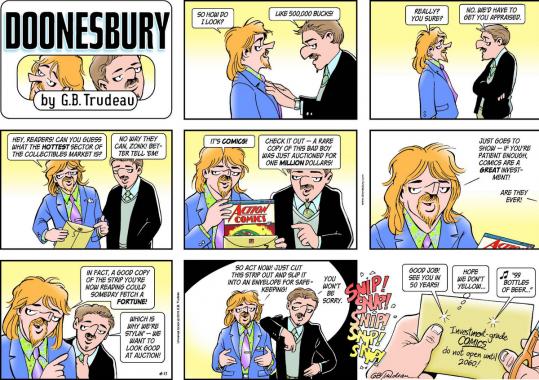 On April 11, 2010, the Sunday newspaper carried its quota of serious news, including a plane crash that killed Polish president Lech Kaczynski and the launch of Massachusetts Governor Deval Patrick’s reelection campaign. By habit, though, many readers first turned to the funny pages to start their Sunday off with a smile, if not a belly laugh.

There, a familiar cast of characters acted up in old, familiar ways. In “Doonesbury,’’ Mark Slackmeyer and Zonker riffed on the monetary value of collectible comics (“A good copy of the strip you’re now reading could someday fetch a FORTUNE!’’). In “Curtis,’’ the title character and his pal Gunk mused on the mating habits of migrating butterflies.

Flash Gordon had fallen into the clutches of archnemesis Durok. Could this be the end for Flash? In “Zits,’’ a hyperactive teenager tormented his hapless mom. And in his inimitable, stream-of-consciouness style, Zippy the Pinhead managed to squeeze references to Ho Hos dessert cakes, Jay Leno, vintage Pontiacs, and the board game Yahtzee into one four-panel strip.

All these comics, plus 130 or so others, are the subject of “One Fine Sunday in the Funny Pages,’’ an exhibit of original artwork currently on view at the Boston Center for Adult Education. Curated by John Read, a Mississippi-based cartoonist and schoolteacher, the show is at once a celebration of the cartoonist’s craft and a recognition that the Sunday comics have become something of a pop-culture relic as print circulations decline and entertainment options multiply in the digital age.

The exhibit, spread over two floors of the BCAE, is free and open to the public. A special reception takes place tomorrow from 2-4 p.m., with many of the contributing cartoonists expected to be on hand to greet the public.

“I wanted it to be a snapshot of the Sunday funnies, so my only rule was, it had to be an April 11 strip,’’ Read said during an interview at the BCAE. Even if the Sunday funnies aren’t as popular as they were a generation or two ago, he added, “Looking at original art that reminds you of your childhood is still popular. The success of an exhibit like this obviously rests on nostalgia.’’

Read brought the exhibit to Boston — it has already toured New Orleans, Columbus, Ohio, and several other cities— to coincide with the annual meeting of the National Cartoonists Society, taking place this weekend in Boston. Those expecting to attend include Hilary Price, creator of the strip “Rhymes With Orange.’’ Price, who lives in the Northampton area, saw the exhibit earlier this year and plans to see it again this weekend.

“Seeing the original art is always interesting to me,’’ says Price, whose strip runs in nearly 200 newspapers. “Look at one of my strips, you see the sweat and tears in it — along with the cats’ prints and Cheetos stains. Others’ are immaculate, though, which makes me envious.’’

Three years ago, Read, 54, launched Stay Tooned!, a trade magazine for working cartoonists. It features profiles, interviews, and artists’ galleries. Read then had the notion of collecting and mounting an exhibit of cartoonists’ artwork. While talking to the widow of “Peanuts’’ creator Charles Schulz, he was encouraged to find a theme that hadn’t been explored in other shows built around the fine art of cartooning. He eventually decided to showcase Sunday strips only — they’re generally bigger than the daily variety — and picked one day several months away, then asked scores of artists to save their strips from that day and loan them for exhibit.

One of the first to agree was “Garfield’’ creator Jim Davis. Hoping for another 60 to 75, Read struck paydirt when Garry Trudeau committed to loaning his 4/11/10 “Doonesbury’’ strip to the show.

In all, more than 120 cartoonists consented to loan or donate their original, pre-inked (i.e. black and white) panels. A handful went further by creating Sunday funnies directly tied to Read’s theme. Thus, “The Fusco Brothers’’ muses upon what other Sunday strips might be up to that day (“. . .Rex Morgan is performing a tracheotomy with a ballpoint pen. . .’’). “Nancy’’ offers visual tributes to fellow funny-page denizens Dennis the Menace, Dick Tracy, Charlie Brown, and others.

“Zippy’’ creator Bill Griffith followed Trudeau’s lead, intrigued by the arbitrariness — what could be more Zippyesque, after all? — of Read’s one-day theme.

“The throwing-the-dice quality to it frankly appealed to me,’’ says Griffith, who lives in Connecticut and plans to be in Boston this weekend. The Sunday funnies were once as dominant a pop culture medium as websites are today, he notes. The biggest misconception? That they’re designed to appeal to kids.

“Some are, but most are not,’’ Griffith avers. “The intent was always to reach an adult audience.’’ As both a comics consumer and someone who draws them for a living, he adds, “I still think of Sunday as something special.’’

To “Curtis’’ creator Ray Billingsley, the Sunday funnies are “a big part of Americana’’ that not only entertain readers but also reflect the national mood, sometimes serious, often less so. “They really offer something for everyone,’’ says Billingsley, whose strip is syndicated in over 250 papers. “So many people allow us into their living rooms each day, we become like family to them.’’

Although editorial cartoons are excluded from the show, an exception was made for several drawings by the Boston Globe’s Dan Wasserman, which Read collected for exhibit at the BCAE only.

Like many other aspects of daily journalism, the cartooning profession grows tougher with each passing year, Read points out. If a syndicated strip appears in fewer than 100 newspapers, the artist is probably struggling to make ends meet. Old standbys like “Popeye’’ (launched in 1929) and “The Katzenjammer Kids’’ (1897), the two oldest strips represented in “One Fine Sunday,’’ once appeared in hundreds of papers. Today they’re carried in no more than 50 apiece.

“Most people are surprised to see these older strips still being done at all,’’ said Read. Some, like “Prince Valiant’’ and “FoxTrot,’’ only appear on Sundays now. Still others (“Dennis the Menace,’’ “Shoe’’) continue getting drawn and published even though the artists who created them are no longer around. As much as his exhibit plays to boomer nostalgia, though, Read enjoys discovering — and highlighting — younger cartoonists still trying to establish themselves.

“I love the working-class guys who plug away doing coloring books and gag cartoons, sometimes for magazines or papers you’ve never heard of,’’ said Read. “My idea was to give people a sense of what’s out there.’’