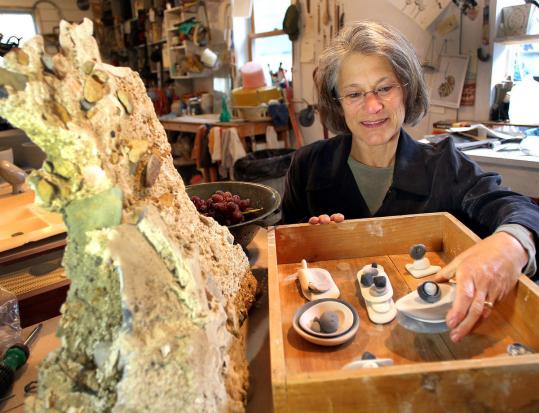 CAMBRIDGE — Andrew Galland is all in favor of buying locally. That’s one reason he purchased a share in a CSA: a community-supported agriculture program that, for a few hundred dollars, will deliver a box of fresh Massachusetts vegetables each week of the growing season to a drop-off near his house in Somerville.

The 34-year-old software designer just signed up for another kind of CSA, too, but this one won’t bring him arugula or eggplant. His $300 share in Community Supported Art will get him three monthly assortments of locally created artworks — nine pieces in all, his to keep.

CSArt, a new project of the Cambridge Center for Adult Education, is modeled on a wildly popular Minnesota art CSA, which has inspired groups in Chicago and Frederick, Md., to create their versions. And some glassmakers in Burlington, Vt., independently adopted the CSA form last year.

The success of the Minnesota program is due in part to the fact that it’s based on something people understand, said Laura Zabel, executive director of Springboard for the Arts, one of the groups that developed it.

“We pretty much took that model wholesale from community-supported agriculture,’’ she said.

Springboard has found that just as shareholders in produce CSAs are curious about who grows their basil, art share buyers like to have contact with the artists whose work they are getting. They want to understand the process, too.

“It gives them a different appreciation for the end product,’’ Zabel said.

It also alleviates the intimidation that the art gallery scene creates for some people, she said. And if the interaction leads shareholders to commission pieces from artists they’ve come to know, then there’s a tangible impact as well.

As of yesterday, when the Cambridge center hosted an event billed as an IPO party for the 50 shares being offered, nine shares had been purchased.

The event was also a reception for the nine artists chosen to create the works, all from Cambridge or Somerville: Grace Durnford, Kate Martens, Judith Motzkin, Anne Peramaki, Christopher Poteet, Richard Sabin, Bryan Smith, Ed Tekeian, and James Zall. By the end of the three monthly deliveries, each artist will have sent one work to each shareholder.

CSArt aims to nurture artists as small business owners and to tap into the burgeoning enthusiasm for the local and the handmade.

The contents of the monthly CSArt boxes will be entirely up to the artists who make the work, just as the harvest in a traditional CSA is up to the farmers and the weather. Unlike art collectors who buy work that suits their tastes, shareholders will have no say in what style or form of art they receive.

But according to Hartnett, CSArt’s target audience is not interested only in artistic style; rather, it is acting on other impulses, such as the desire to meet local artists and “to do a good thing’’ by supporting them.

For Galland and his wife, Gina, one reason for taking what he called the “fun risk’’ of buying a share is the hope of decorating their home with art at a relatively modest cost.

If they don’t like some of it, they can give it away, much like someone with 5 pounds of unwanted rutabagas from a farm CSA could do.

An exhibition of the nine artists’ work July 1 to Aug. 31 at the Cambridge center will give CSArt shareholders and — if the 50 shares have not sold out — potential shareholders an idea of the work they might be acquiring. Those who committed early, like Galland, did so without knowing who the artists were, let alone what they created.

Each of the artists, chosen from a pool of 65 applicants, will receive a $1,500 stipend in exchange for 50 works of art. Some may be limited-edition prints, such as the watercolor woodcuts Sabin plans to make, while others will be one of a kind, like Motzkin’s ceramic cairns, small sculptures that look like carefully stacked stones. All will be original pieces.

Sabin, a retired architect who prints his woodcuts from blocks he carves out of poplar or aspen, said it may take him 24 hours of work to get even 25 usable prints, though it could be longer, depending on the complexity of the image. He’s considering a Concord snow scene for this project.

Motzkin, an established artist who said she ships her ceramics all over the world, creates her cairns from recycled shards of broken pots, which she tumbles in sand and water until they’re as soft-edged as the beach pebbles they often resemble.

“The stipend is really not enough to pay for anything,’’ said Motzkin, who has made six of her CSArt pieces. “Really, the reason to do this is community.’’

Durnford, a mixed-media artist who graduated from the Rhode Island School of Design in 2005, primarily wants to get her work into the hands of 50 people who didn’t know it before.

“I produce the work that I produce because I’m compelled to do it, but also because it’s something I want to share,’’ said Durnford, who began making fine art when she returned from designing textiles at a mill in India and couldn’t find a comparable job in this country.

For farmers, a CSA can help pay the bills — it’s a means of getting money upfront for products. CSArt, which is funded by a $17,000 grant from the Massachusetts Cultural Council’s Adams Arts Program, is more about long-term results. The stipend, Hartnett acknowledged, won’t make much of a monetary dent on its own.

“Think of it as seed capital,’’ she said.

Each of the artists will also get four hours of one-on-one time with a consultant in small business development and entrepreneurial skills, learning things like how to value and price their time.

It’s a service Durnford, a former Rhode Island School of Design textiles major, is eager to use. “The business side of art is just a whole . . .’’ She trailed off and sighed. “Making the things comes easy to me. Marketing them, not so much.’’

But Sabin, who works in a Huron Avenue studio filled with his watercolors and prints, sounded skeptical.

If this year’s CSArt proves popular, the center could do it again, expanding into various art forms: video and new media, performance, material objects, a mix of all of the above, Hartnett said.

“There’s no doubt in our minds,’’ she said, “that if this thing is successful, there’s a lot of ways to run.’’