THIS STORY HAS BEEN FORMATTED FOR EASY PRINTING
Summer Preview

No, not that Mormon musical 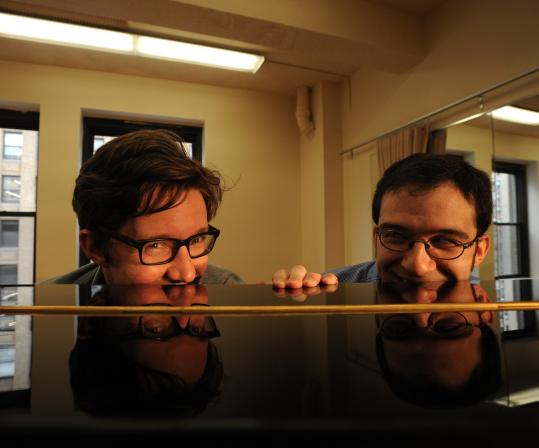 “What we have is hopefully a really funny show about painful and complicated experiences,’’ said lyricist Sam Salmond (left, with composer Will Aronson at a rehearsal for “Mormons, Mothers and Monsters’’). (Jennifer S. Altman for The Boston Globe)
By Don Aucoin Globe Staff / May 22, 2011

Sam Salmond and Will Aronson are only too aware that the title of their new musical, “Mormons, Mothers and Monsters,’’ might prompt some theatergoers to assume they’re trying to ride the Tony-nominated coattails of “The Book of Mormon.’’

Adds Salmond, 24: “This is not at all the same show. It just happens to share the name ‘Mormon.’ . . . I hope people don’t think of it as ‘the other Mormon musical.’ It’s a totally other thing.’’

In a way, the very fact that Salmond has to worry about his show being confused with another “Mormon musical’’ illustrates how energized the musical theater scene seems to be at the moment, in New York and beyond.

Granted, New England theaters are usually alive with the sound of music during the summertime. Still, the next few months seem to be fairly bursting at the seams, with shows ranging from the touring Broadway production of “West Side Story’’ at Boston’s Colonial Theatre to “The Who’s Tommy’’ at the Berkshire Theatre Festival and “My Fair Lady’’ at North Shore Music Theatre.

Even in that crowded field, “Mormons, Mothers and Monsters’’ promises to stand out, in part because it’s new, the product of Barrington Stage Company’s Musical Theatre Lab, and receiving its world premiere.

Set to run at the company’s Stage 2 in downtown Pittsfield July 14-31, with a book and lyrics by Salmond and music by Aronson, it is drawn from Salmond’s turbulent life as the son of a thrice-married British mother who raised him in the Mormon faith: first in England, and then, starting at age 9, in Pittsburgh.

“What we have is hopefully a really funny show about painful and complicated experiences,’’ says Salmond, adding that he sought to explore “my relationship to being a Mormon, to my mother, and to the things that I was afraid of. I became afraid of my mother at one point.’’

It has been a decade since Salmond saw his father. “We’re not close,’’ he says. And his mother? “I have a complicated relationship with my mother, like everyone does,’’ Salmond replies.

The show is being developed under the auspices of the Musical Theatre Lab run by William Finn, the Tony-winning composer of “Falsettos’’ and “The 25th Annual Putnam County Spelling Bee.’’ Of “Mormons, Mothers and Monsters,’’ Finn says: “It’s really funny, really moving, and really horrifying. That’s not a combination you often find.’’

It was Finn who put Salmond and Aronson together. Last summer, when Salmond was working as Finn’s assistant at the Musical Theatre Lab, he told Finn about his idea for a musical based on his upbringing. Finn suggested Salmond get in touch with Aronson, a composer who had also worked as Finn’s assistant five years ago. The two hit it off, and after a few months of work they presented half a dozen songs to Finn and to Barrington Stage artistic director Julianne Boyd, then made adjustments based on their feedback.

“There’s a lot of exciting stuff happening, and I hope to be part of this change in musical theater,’’ says Salmond. “A new generation is stepping up and saying what they want to say, using that form to say something new and have fun.’’

Speaking of that new generation using the musical form to “say something new and have fun’’: A month ago Salmond went to see “The Book of Mormon.’’ He liked it — and he liked even more the fact that, in his view, it bears no similarities to “Mormons, Mothers and Monsters.’’