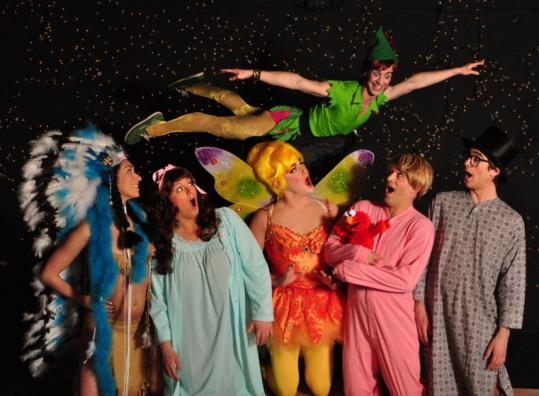 Muppet mermaids, a bawdy band of pirates cavorting to the theme of TV’s “The Love Boat,’’ and characters snorting “pixie dust’’ in order to fly. Welcome to Neverland, as seen through the hilariously twisted lens of Ryan Landry and his Gold Dust Orphans.

Landry’s current adventure, “Peter Pansy,’’ takes the children’s classic and turns it on its ear with a wild musical adaptation that revolves around Wendy, Michael, and John’s visit to the island of Provincetonia. Although Landry adheres to the outlines of J.M. Barrie’s classic, this is strictly an adults-only version that careens wildly from the story of the Darling children’s trip to production numbers that include a dance tribute to Bob Fosse. In between scenes with Wendy, the Lost Boys and the Pirates, characters sing familiar ’70s songs, all with lyrics rewritten for the occasion.

While “Peter Pansy’’ may not be Landry’s most inspired work, it allows him to step back and let some other performers shine. Gold Dust Orphan regulars such as Olive Another in a spirited turn as Tinkerbell, Scott Martino as Michael, and Landry as a homophobic Captain Hook deliver their usual scene-stealing turns, but “Peter Pansy’’ includes a range of new faces, including Michael Wood in the title role. Wood, who is an overenthusiastic Peter, is also a talented singer and dancer, and his Don Ho number, complete with leis and ukulele, is a standout.

Liza Lott, who has previously done an amazing Liza Minnelli with the Orphans, plays Wendy, the lonely girl who is anything but mother to these lost boys. And Sapphira Cristal, a stunner who has appeared in other Landry romps, gets an expanded role as the Darlings’ sassy maid and even sassier Smee, Captain Hook’s fishnet-stockinged first mate.

CORRECTION: Because of incorrect information provided by the Gold Dust Orphans, an earlier version of this review misstated who directed the show. It is James P. Byrne.