For decades, playwright was captivated by 'Zoo' 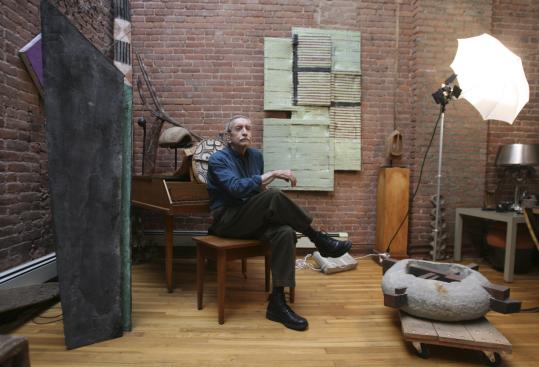 Edward Albee created "Homelife" as a prequel to "The Zoo Story," his 1958 landmark play. "I was amplifying it. I was finishing it -- by writing this first half," he says. The two one-acts, paired, make up "At Home at the Zoo." (Mary Altaffer/Associated Press/File 2008)
By Christopher Wallenberg Globe Correspondent / May 8, 2011

NEW YORK — Edward Albee may have written his landmark play “The Zoo Story’’ in 1958. But four decades later he decided it wasn’t finished. Over the years, he’d always had a nagging feeling that something was missing from the piece’s unsettling encounter between two very different men on a Central Park bench: the troubled outcast Jerry and mild-mannered middle-class everyman Peter.

“ ‘The Zoo Story’ is a good play. It’s a play that I’m very happy I wrote. But it’s a play with one and a half characters. Jerry is a fully developed, three-dimensional character. But Peter is a backboard. He’s not fully developed. Peter had to be more fleshed out,’’ says Albee during a recent interview at his sprawling loft in the Tribeca neighborhood of Manhattan, where he has lived for nearly 40 years.

These thoughts would press on him from time to time. “But I wouldn’t do anything about it. I got busy,’’ he says, with a smile, between sips of a large iced coffee. “I’d remind myself, ‘You haven’t done your job yet.’ Then one day out [at my house] in Montauk, I just said, ‘Well, why don’t you do it?’ And I was surprised how easy it was.’’

His solution was to pen a new one-act prequel, which he called “Homelife,’’ that would zoom in on Peter’s seemingly comfortable domestic world on the Upper East Side with his wife, Ann. Pairing these two one-acts, “The Zoo Story’’ and “Homelife,’’ made a complete full-length play. That combination, then called “Peter and Jerry’’ (since rebranded “At Home at the Zoo’’), premiered at Hartford Stage in 2004 before being produced off-Broadway in 2007, to largely glowing reviews. Zeitgeist Stage Company is now mounting the Boston premiere of “At Home at the Zoo’’ at the Boston Center for the Arts.

“It took me several years to get back to doing the proper first act, but it only took me a few weeks to write,’’ says Albee, now 83 and widely considered America’s greatest living playwright. “So obviously I still had it in my head — or the essence of it in my head. . . . This one was easy to do. You just filled in all the blanks.’’

During the interview, Albee speaks softly and deliberately and frequently flashes a wry, conspiratorial smile. As in his plays, he says a lot with few words. His loft is a veritable art gallery, brimming with dozens of sculptures, African vases, and paintings on seemingly every surface. (He mentions a newfound fascination with Aboriginal art, which he started collecting after several trips to Australia.)

In Albee’s early play “The Zoo Story,’’ Peter mostly reacts to Jerry’s storytelling. “I guess I cared more about the Jerrys that I was meeting than I did about the Peters. I grew up around all these Peter people,’’ says Albee, referring to the figures who populated his troubled childhood in suburban Larchmont, N.Y., as the adopted son of wealthy and emotionally distant parents. “I was more interested in the character of Jerry than Peter. Because he was the more interesting person, the more complex person. An outsider is always more interesting than an establishment figure.’’

When he began thinking about “Homelife,’’ Albee realized that he was fully aware of all the details about Peter’s world, including his wife, Ann. (Albee famously imagines his plays and his characters for long periods of time, often years, before writing anything down.) “I’d never met Ann. But I knew her,’’ Albee says. “And I knew their relationship. I knew everything about both of them.’’

Peter is an executive at a publishing company, and the couple have two unseen kids. They seem to have a comfortable marriage of mutual respect and admiration. But you begin to see the cracks in their relationship — the complacency, the trouble communicating, and the sense of resignation with which they seem to regard their marriage.

For a playwright who doesn’t rewrite his plays — besides trimming what he calls “excess and self indulgence’’ — this kind of major add-on may seem an unusual act. Why risk messing with an iconic work? “I wasn’t rewriting it,’’ Albee responds. “I was amplifying it. I was finishing it — by writing this first half.’’

When “The Zoo Story’’ burst onto the international stage in 1959 at the Berlin Arts Festival, paired with Beckett’s one-act “Krapp’s Last Tape,’’ it was a daring statement for an American playwright — raw and unflinching, with biting language, a heightened sense of absurdism, and an air of desperation and danger as it aligned itself with society’s disenfranchised outsiders.

In 1960, it was staged off-Broadway and received mixed reviews, but a number of raves heralded the arrival of a provocative new talent. The play became a hit, and Albee was transformed into the hot young American playwright of the moment.

“It was a stark reaction to the comedies and dramas that tended to be on Broadway and in commercial theaters at the time. Along comes this bold, sit-up-and-take-notice piece of writing that turned people’s heads,’’ says David Miller, artistic director of Zeitgeist Stage Company. Miller will be playing Jerry, a part he’s always wanted to tackle and his return to acting after many years away.

Albee wrote “The Zoo Story’’ in the months leading up to his 30th birthday. It was a time when he was at a bit of a crossroads in his life, feeling restless and unmoored. Writing the play, he found his voice and point of view as a writer.

“ ‘The Zoo Story,’ ’’ he says, “was the first thing that I have ever written that I could say with any honesty, ‘Hey Edward, you’ve written something good.’ The rest was crap up until that point. All the poems. All the novels. The short stories. The attempts at plays. Every writer has an age when he’s capable of writing like himself for the first time. And with me, it was when I was 29, and that was ‘The Zoo Story.’ And I knew it was good.’’

Albee drew inspiration for the Jerry character from the people he met while working as a messenger for , dashing around Manhattan delivering telegrams. “You invent characters. But you keep your eyes and your ears open if you’re a writer. You see people, and you hear things, and you look at things. Then there’s this thing called creative imagination.’’

Albee has been helping other young writers invent characters and plays for close to three decades now. He teaches playwrighting for one semester every year at the University of Houston. And he doesn’t seem to be slowing down creatively. He has several plays brewing, one he’s halfway through writing, which will be part of the inaugural season at the new Signature Center complex in Manhattan next year.

Some critics have observed that while “The Zoo Story’’ is raw, feral, and charged with menace, “Homelife’’ seems to be the work of an older and wiser man in a more contemplative state of mind. Albee disagrees. “I find that the two plays together are seamless,’’ he says. “They seem like the same play written by the same person at the same time.’’

Correction: Because of a reporting error, an earlier version of this story misstated when Edward Albee’s play “Peter and Jerry’’ premiered at Hartford Stage. It was 2004.

AT HOME AT THE ZOO Presented by Zeitgeist Stage Company at Plaza Theatre, Boston Center for the Arts, through May 28. Tickets: $20-30. 617-933-8600, www.bostontheatrescene.com