At industrial sites, the landscape shifts

Providence’s Steel Yard is a fine case in point 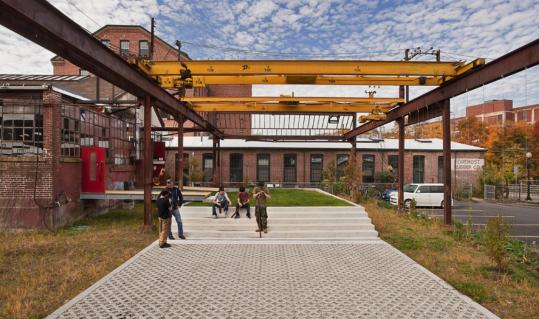 Cambridge landscape architects Mark Klopfer and Kaki Martin transformed an old steel fabricating plant into a place where artists create their own work and teach a variety of courses. (Christian Phillips)
By Robert Campbell Globe Correspondent / May 1, 2011

PROVIDENCE — When we think of landscapes, we usually think of gardens and rivers, of lakes, forests, and mountains. We don’t normally think of abandoned factories.

One of the things they’re being asked to do more and more often is re-imagine the wreckage of America’s industrial past as a new kind of landscape. They’re learning how to reclaim our abandoned waterfronts, collapsing mills, and polluted river systems, sites that are littered with detritus and usually sick with the toxic waste left behind by some failed industry.

The Steel Yard here is the best example I know of how an industrial wasteland can be transformed into a new kind of urban beauty. Cambridge landscape architects Mark Klopfer and Kaki Martin, partners in the firm Klopfer Martin Design Group in Harvard Square, have transformed an old steel fabricating plant into — well, a new steel fabricating plant.

The 3 1/2-acre property was home for a century to a company called Providence Steel & Iron. It produced custom shapes for ornamental work in architecture. The company went out of business in 2001, and the site was left to rot. It stands in a part of Providence known as the Industrial Valley, a place where five neighborhoods converge, and where failed industry has been the local norm. The address is 27 Sims Ave.

A mixed collection of buildings, with brick or metal siding, previously stood on the site. Many of the constructions were stained or rusting in ways that gave them a rich visual interest. Grass grew wild to knee height. Rabbits and birds were the inhabitants. The great gantry cranes that once traveled back and forth overhead, indoors and out, remained, but they were as motionless as monuments in a cemetery.

Two investors then in their early 20s — Nick Bauta and Clay Rockefeller, graduates respectively of the Rhode Island School of Design and of Brown University — who shared a love for industrial sites, bought the factory for $1.2 million and hired Klopfer and Martin to redesign.

The key concept here, which I kept hearing from everyone, sounds at first like an oxymoron. Everyone wanted an “urban wild.’’ Nobody, say Klopfer and Martin, wanted a conventional prettified park. “Everyone bought into the grittiness,’’ says Drake Patten, now the Steel Yard’s director. The community loved the place as it was, both urban and wild. They just wanted it put back to work.

Armed with grants of $600,000 from the Environmental Protection Agency, Klopfer and Martin began an awesome task. For starters, the ground was polluted with lead from paint. The Klopfer team wanted to keep this toxic soil on the site rather than dump it in someone else’s backyard. Yet they also wanted to store rainfall on site, not let it run off uselessly into sewers. How do you safely store rain on a polluted site? The paradox was solved with an ingenious system of pervious paving, with earthen “moats’’ to take up any overflow.

Klopfer and Martin restored the gantry cranes, which now again roll overhead. They replanted some of the old grasses, leaving them uncut. Klopfer says he used grass to “re-colonize the site’’ after its period of being ignored.

The designers scavenged everywhere. They got free chunks of steel sheet piling that were being thrown away at other construction sites. The piling became rough but elegant trim at the edges of grass areas.

Volunteers helped a lot. Klopfer says there were 192 volunteers on the site on “planting day,’’ and they’re still an essential part of maintenance. College kids arrive during vacations from as far away as Ohio and Kansas. They perform clean-up jobs, sometimes leaving college inscriptions as mementos on the window glass. If you hang out enough at the Steel Yard, you get to be called one of “the Yardies.’’

The more you look at the Steel Yard, the more delightful become the inventive design moves. Yet the greater pleasure is not in the spaces, but in the activities they house. Many kinds of courses, for kids and adults, are taught by artists who often are also creating their own work on site. There’s a lot of steel and metal work, but the artists also teach ceramics, jewelry making, blacksmithing, glasswork, much else. There’s a course on how to fix bikes, another on wearable art, another called a copper bowl workshop. Landscaper Martin herself took welding and glassmaking.

There are summer camps for children, too. One of them, Camp Metalhead, trains teens in welding and working with steel.

Any artist can move in and rent space and equipment to work and teach. A team calling itself the SQUAD fashioned a steel fence mural for the Steel Yard’s main entrance. Other artists work with students to make bicycle racks, trash cans, fences, and sculptures for public sites. One school group made a “Peace Bench’’ for its schoolyard.

There are public activities too. There’s been a wedding and a RISD alumni gathering. Due this summer are a techno music fest and a writer’s conference. On the annual Cruise Night, an American Graffiti of old cars noses onto the site.

The Steel Yard is set up as a nonprofit corporation. It has no endowment and lives off fees, rents, and grants.

Is the Steel Yard beautiful? It’s helpful to remember that back in the high tide of the modern movement in architecture, everything Victorian was widely considered to be ugly. But as time passed, Victorian style came back into fashion. Today it is much loved.

I think the same thing is happening to industrial architecture. All those wonderful old bridges, like the Northern Avenue Bridge in Boston, all those marvelous smokestacks and grain elevators and cranes and shipyards, are as visually rich as any ornamental Victorian mansion or fully rigged clipper ship. As they age and decay, as we begin to lose them, they often seem more beautiful than ever.

The Steel Yard has been placed on the National Register of Historic Places. It’s been certified, in other words, as a worthy monument of the past. But the best thing about it is that it’s alive in the present. The Steel Yard is a steelyard again.