A compelling, oppressive state of ‘Grace’ 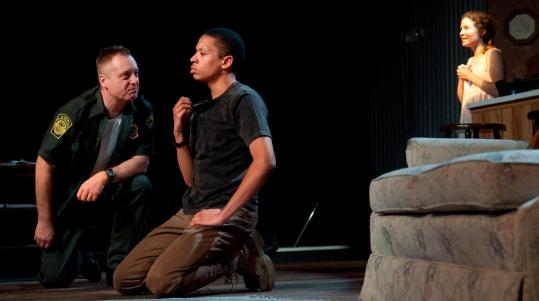 Nearly 50 years after he first emerged as a significant force in Boston theater, David Wheeler retains his gift for generating a certain kinetic power onstage.

This is made abundantly clear during the most potent moments of Company One’s Wheeler-directed production of “The Book of Grace,’’ a fiery but flawed drama by Suzan-Lori Parks.

Wheeler never quite transcends the central problem with “Grace’’: namely, that its three characters function as one-dimensional archetypes in a none-too-subtle allegory (about power, race, gender, and the soul-sapping consequences of an Us-vs.-Them view of the world) rather than fully realized human beings.

But there is something compelling about the ferocious, uncompromising clarity of the playwright’s vision, and about the inventive way Wheeler transmits that vision while drawing strong performances from his cast of three, including a seasoned veteran (Steven Barkhimer) and two younger performers (Jesse Tolbert and Frances Idlebrook).

Then again, the man knows a bit about bringing out the best in young actors. The artistic director of the Theatre Company of Boston from 1963 to 1975, Wheeler worked with the likes of Al Pacino, Robert De Niro, and Dustin Hoffman. Perhaps you’ve heard of them.

In “The Book of Grace,’’ Wheeler conjures an aura of menace that lends an extra jolt to scenes that range from the surprising (a sudden, far-from-affectionate kiss that one character bestows on another) to horrifying (a climactic scene of violence that is rendered with chilling realism).

The effective video sequences, designed by Jason Weber, contribute to the oppressive atmosphere that pervades “Grace.’’ So does the set design by Eric D. Diaz, with its drab household (couch, TV, ironing board, kitchen sink, fridge) enclosed by a wire fence, beyond which stretches a long road, with the image of a truck headed straight toward the audience.

An air of danger emanates from Vet, a white border patrol guard in south Texas played by Barkhimer with the ominous stillness of a coiled spring. Barkhimer’s performance almost compensates for the fact that the part, as written, is a caricature of evil incarnate.

As “The Book of Grace’’ begins, Vet is rehearsing a speech for an award he’s slated to receive for stopping illegal immigrants who were driving a truckload of marijuana. “Aliens. That’s what we’re up against. . . . They’re not like us. That’s why we’ve got to keep them out,’’ says Vet, adding pointedly: “Sometimes the alien is right in your own home. Sometimes right in your own blood. And you’ve got to build a wall around it.’’

Which brings us to Buddy and Grace. Buddy (Tolbert), who is black, is Vet’s son from an earlier marriage. His mother is now dead, and Buddy, after a stint in the Army, has returned for a visit at the invitation of Grace (Idlebrook), Vet’s current wife. A happy homecoming it is not.

Idlebrook brings a raw and touching vulnerability to Grace, a waitress at a diner whose chirpy demeanor doesn’t conceal a whiff of desperation. She collects clippings of upbeat, happy-ending newspaper stories, intent on compiling a book that will provide tangible proof of her belief that, as she puts it, “There’s a lot of good in the world. . . . You just gotta look for it.’’

As Buddy, Tolbert proves adept at revealing layers of slow-burning emotion. At first, the son keeps a wary, watchful distance from the father, though at times he baits him.

It slowly becomes clear that Buddy, who has been done a terrible wrong by Vet, has a reason for coming back home. “Forgiving it will depend on him not forgetting it,’’ says Buddy. “Funny how that works, huh?’’

In a pair of second-act speeches by Buddy and Grace, Parks too explicitly spells out the many grievances — personal, historical, metaphorical — against Vet and all he stands for.

But the playwright, who was the first African-American woman to win the Pulitzer Prize for drama (in 2002, for “Topdog/Underdog’’), is a provocative and important voice. Wheeler makes sure that voice can be heard, even amid the overly schematic structure of “Grace.’’

THE BOOK OF GRACE Play by Suzan-Lori Parks