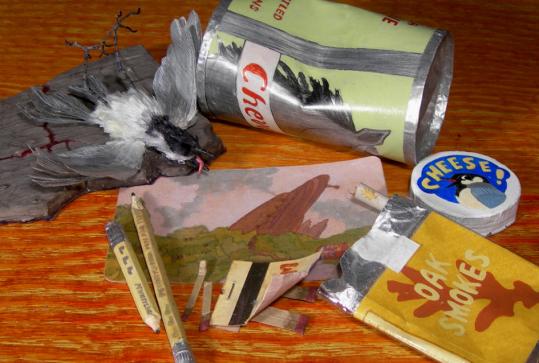 Detail from “His Room as He Left It’’ by Ariel Kotker. (Courtesy of The Artist)
By Cate McQuaid Globe Correspondent / April 12, 2011

The Traveling Scholars are back, with tales to tell. Each year, the School of the Museum of Fine Arts sends off a select few alumni and seasoned students in the Fifth-Year Certificate program with travel grants. This year’s crop has spent nearly two years exploring the world and their own creative impulses. “SMFA Traveling Scholars,’’ now on view at the school, features three artists who explore the intricacies of narrative, and, for a refreshing alternative, one who dives into the possibilities of space.

Let’s start there, with Kate Sinnott’s absorbing, untitled mixed-media installation. Call it drawing with architecture — Sinnott has essentially taken a room as her canvas. She cuts into the walls, draws over them, uses a patchwork of materials. “This work grows from the desire to be inside a drawing,’’ she writes in her artist’s statement, and she pulls it off in ways both mundane and magical.

The floor looks to be part concrete, part linoleum, part slatted wood, although some of it may be trompe-l’oeil drawing. That last part unfurls like a carpet to a section of wall that peels open at the bottom, where light pours in. Imagine the pocket between drywall and studs in your house being filled with light; you’d live inside a secret envelope of light.

Sinnott has placed an orange key just inside the wall’s opening. If this is a space under construction, which it feels like, then perhaps a worker left it there. On the other hand, when I saw the key washed in light, I found myself thinking of the wardrobe entryway to Narnia. Sinnott’s space, with its ordinary materials and bland, pencil-driven palette, does recall the inside of a drawing. It turns out that it can also be a trap door to the viewer’s own wild imaginings.

Which just goes to show, if you’re inclined to storytelling, you can find a story in a mostly empty room. There’s a somewhat less empty room in Ariel Kotker’s “His Room as He Left It,’’ another mixed-media installation. The centerpiece is a completely handmade bedroom, with a single bed fashioned from cardboard, minus the mattress. A slingshot in a case rests on the bed. Handmade jeans and high-top sneakers lie on the floor. This handmade quality alone is a captivating idea; everything seems scruffy, heightened, and not quite real. But it needs even more detail.

Instead, Kotker has put that information elsewhere, papering the walls outside the bedroom with sketches and notes. These are the doodlings of a fictional character, a bashful young man named Drey Fank, who lives in the imaginary town of Sparkleton, Pa., a severely depressed place where the residents hunt songbirds for food. As I read the notes, I struggled to keep track of Drey and his friends. I would rather have picked up the story from concrete elements in the bedroom installation, and filled in the blanks of the narrative myself.

Kotker tries to blend visual art with a novel — two mediums that don’t mix well, other than on film or video. The other two artists in “SMFA Traveling Scholars’’ work deftly in that realm.

Nathan Boyer screens several videos that cleverly play mix-and-match with familiar pop culture tropes. The three-part “Mystery Talk’’ features two crumple-faced hand puppets, Dr. Densil and the Disordered Mind, who take viewer questions and attempt to solve personal and universal mysteries. For instance, Becky writes in: “I was a little girl full of promise, and it is gone. Where has it gone? Who stole it?’’ Dr. Densil and his cohort, who is a dizzy, waifish fellow in a tracksuit, end up in Becky’s childhood kitchen, confronting her mother and singing a song about the damage parents can do. While Boyer pulls off a bright, happy mood borrowed from “Sesame Street,’’ he cuts in jarring, psychedelic imagery, and he leaves the viewer bemused and uneasy.

David D’Agostino’s documentary “Arthur Knight Hammer: King of the Bears’’ tells the strange, tender story of the visionary Hammer, a committed Christian and gay man. He is in so many ways an outsider. Rejected by churches because of his sexuality, and by certain gay circles for being large and hairy, he has founded “Bearidise,’’ a haven for men like him. D’Agostino weaves artful shots with straight-on-interview footage. Hammer says “Earth to God, come in please,’’ and the video cuts to a lovely bird’s-eye view of the man floating serenely in a pool flecked with light. The film is beautifully paced, and at the end it packs a punch as Hammer makes his beliefs in an imminent rapture more and more clear.

Bears — the ursine type — are the focus of one of the artists in the “Fifth Year Exhibition,’’ also up at the Museum School. I don’t review student shows, so I won’t hold forth on this one, except to say that David Pappas’s electric wall drawings of bears are worth a peek.