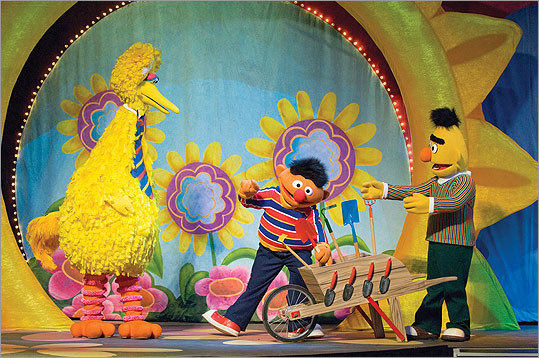 DANCE ON! THE BIG APPLE CIRCUS Grandma the clown is here, of course, along with jugglers, acrobats, gymnasts, contortionists, monocyclists, lasso twirlers, a dozen miniature horses, some snazzy dance routines, and a lot of eye-popping costumes. Through May 15. Boston City Hall Plaza. 888-541-3750, www.bigapplecircus.org

SESAME STREET LIVE: ELMO’S GREEN THUMB Elmo and his friends fall under a magic spell that shrinks them to teeny size, giving them a bug’s-eye view as they explore Big Bird’s garden and learn that many creatures have a part to play in our ecosystem. April 15-17. Agganis Arena, Boston University, 800-745-3000, www.ticketmaster.com

THE COUNT ME IN CIRCUS This short play for preschoolers promises to “make math concepts fun.’’ It’s one of numerous short (20 minutes or less) plays, including “Arthur Builds a Tree House,’’ “The Tale of the Three Little Pigs,’’ and “The Plate of Cookies,’’ that will be presented by City Stage Co. on KidStage during school vacation week. April 16-24. Boston Children’s Museum. Tickets free with museum admission. Information: www.bostonchildrensmuseum.org

42d STREET Looking for a way to get the kids hooked on musicals? You might introduce them to the ultimate showbiz saga: A chorus girl (played by Ephie Aardema) gets her big break when the show’s star (the redoubtable Kathy St. George) breaks her ankle. Directed and choreographed by Ilyse Robbins, with music by the great Harry Warren and lyrics by Al Dubin. May 5-29. Stoneham Theatre, Stoneham. 781-279-2200, www.stonehamtheatre.org

ANIMAL CRACKERS Best known for the anarchic Marx Brothers movie version, this musical comedy (scripted by George S. Kaufman and Morrie Ryskind) about a zany African explorer and the search for a stolen painting will star Ed Hoopman as Captain Spaulding (the Groucho role), along with such stalwarts as Leigh Barrett, Grant McDermott, and Aimee Doherty. For ages 12 and up. May 6-June 4. Lyric Stage Company. 617-585-5678, www.lyricstage.com

THE DROWSY CHAPERONE This Tony-winning musical about a man who is magically transported into the middle of his favorite show features a talented cast including Karen MacDonald, Will McGarrahan, Thomas Derrah, Kerry A. Dowling, and McCaela Donovan. For ages 12 and up. May 6-June 5. SpeakEasy Stage Company. Roberts Studio Theatre, Boston Center for the Arts. 617-933-8600, www.SpeakEasyStage.com

TO KILL A MOCKINGBIRD An adaptation, with a cast of 37 young and adult actors, of Harper Lee’s classic novel about a lawyer named Atticus Finch, who took a stand against racism, and the life lessons learned by his daughter, Scout. May 7-15. Boston Children’s Theatre. Wimberly Theatre, Boston Center for the Arts. 617-424-6634, www.bostonchildrenstheatre.org

FARFALLE The Italian theater troupe Compagnia TPO creates an immersive and interactive theater experience that takes kids on a journey through the life cycle of a butterfly. May 10-15. Presented by Celebrity Series of Boston at Paramount Black Box theater. 617-824-8000, www.celebrityseries.org

THE COMEDY OF ERRORS Propeller Theatre Company, an all-male troupe from England known for rowdy interpretations of Shakespeare, tackles the Bard’s farcical tale about two sets of identical twins who were separated at birth and are reunited many years later. Mishaps and merriment ensue. For ages 12 and up. Note to parents: There is a moment when an actor streaks naked through the audience. May 19-June 19. Presented by Boston University School of Theatre in association with Huntington Theatre Company, at BU Theatre. 617-266-0800, www.huntingtontheatre.org

TELL YOUR STORY and THE PRINCE AND THE PAUPER Something new, something classic in Watertown. “Tell Your Story,’’ the culmination of a three-month New Repertory Theatre program led by actress Eve Kagan, is drawn from the personal stories of Brighton High School students. May 7-9. Presented by New Rep at Arsenal Center for the Arts, Watertown. 617-923-8487, www.newrep.org. “The Prince and the Pauper’’ is a stage adaptation of Mark Twain’s beloved tale about a prince and a poor boy who switch places. May 20-22. Presented by Watertown Children’s Theatre at Arsenal Center for the Arts, Watertown. 800-838-3006, www.watertownchildrenstheatre.org