In Wheelock's 'Aladdin,' a sprinkling of Gold Dust 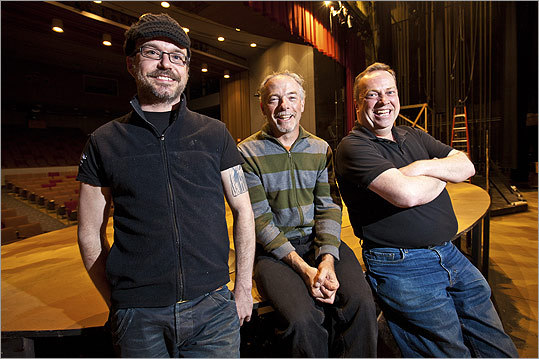 From left: technical director Matthew Lazure, director James P. Byrne, and actor Larry Coen on the set of “Aladdin and the Wonderful Lamp’’ at the Wheelock Family Theatre. All three are veterans of the Gold Dust Orphans troupe. (Aram Boghosian for The Boston Globe)
By Joel Brown Globe Correspondent / April 10, 2011

Beginning Friday, Larry Coen will play the role of the Magician in Wheelock Family Theatre’s “Aladdin and the Wonderful Lamp.’’ He comes to the role fresh from his turn as Big Mamma in the Gold Dust Orphans’ drag-filled parody of Tennessee Williams’s “Cat on a Hot Tin Roof’’ — one with a far more risque title.

Maybe not an unusual transition for an actor, but the shows also have the same director, James P. Byrne. The family-friendly Wheelock and the adults-only Orphans share backstage personnel, actors, and the occasional prop. They seem like a theatrical odd couple, but the people involved say the companies’ approaches aren’t as different as you might think.

“There’s the same level of trying to create magic in the space for both audiences,’’ Coen says, sitting backstage at Wheelock with Byrne and technical director Matthew Lazure, another crossover.

“We both have a certain amount of joy,’’ Lazure says. “The material’s dirtier at the Orphans, but it’s still very playful and childlike.’’

A busy actor and director around town, Coen got his Actors Equity card in 1998 thanks to Wheelock and his performance in “Once Upon a Mattress.’’ He won an Elliot Norton Award in 2010 for directing the Orphans’ “Phantom of the Oprah.’’

Lazure has worked at Wheelock for nine years, but he goes back to act or work for the Orphans when he can. He says he was brought to Wheelock by Byrne, who has directed numerous shows and won awards with both companies.

Others with a foot in both companies include Wheelock costumer Lisa Simpson and director of marketing Charles Baldwin, Orphans technician Roger Moore, and former Wheelock student Jennifer Provoost, now with the Orphans.

“I remember I was doing ‘Witch of Blackbird Pond’ here and ‘Carrie’ over there, and both first acts ended with the word ‘witch,’ ’’ Byrne says, shaking his head.

Children’s and family theater is the touchstone for many of the crossovers. Byrne, Baldwin, and Wheelock founders Jane Staab and Susan Kosoff all met originally at Harwich Junior Theatre. Coen is the artistic director of City Stage Company of Boston, which provides free arts education and performances at schools and community centers, including KidStage at the Boston Children’s Museum. In 2010, Lazure started a new children’s theater on the Cape, the PeeWee Players of Provincetown.

Coen, Byrne, and Lazure laugh a lot, and as they talk, plenty of parallels emerge: Both the Wheelock and the Orphans have enough returning actors that they almost count as repertory companies.

“I also love that in both places the direction you get is: ‘Respect the audience enough to play the scene fully, do not pull punches, do the scene as honestly as you can,’ ’’ says Coen.

“It’s the same thing with the Orphans. If you believe that character, it doesn’t matter how absurd the character is,’’ says Lazure.

“The audiences are in some ways similar. They’re really immediate,’’ says Byrne. “With kids, if the show starts to become canned, they just check out. It’s the same way with the Gold Dust Orphans.’’

He adds, “Both groups really like to use makeup, and wigs aren’t a bad thing in either group.’’

Staab, who also serves as Wheelock Family Theatre’s casting director, sounds amused by all the connections but agrees there is a parallel onstage.

“Obviously the Gold Dust Orphans are into satire and original takeoffs on great plays, and the Wheelock Family Theatre is very interested in bringing to life the classics,’’ she says. “The idea of putting your heart into everything you do is definitely there.’’

But Landry has a rare serious moment when he talks about Wheelock. “It’s been a really important relationship for us,’’ he says. “They’re a great company and they do great work.’’

Wheelock puts on its shows in a 650-seat proscenium theater on the Wheelock campus. The Orphans produce theirs in the low-ceilinged basement of the Machine nightclub on Boylston Street. Two very different venues, not far apart.

“Wheelock has been very kind to let me borrow things,’’ Landry says. “When we go, ‘Oh my God, we need a spotlight,’ we go over and get it.’’

“I would love to do children’s theater, but I’ve never been able to find the time between writing and doing shows,’’ says Landry. “I most definitely want to go over there someday and direct a show or star in a show.’’

ALADDIN AND THE WONDERFUL LAMP Play by James Norris.