Cirque Éloize performers are off the wall 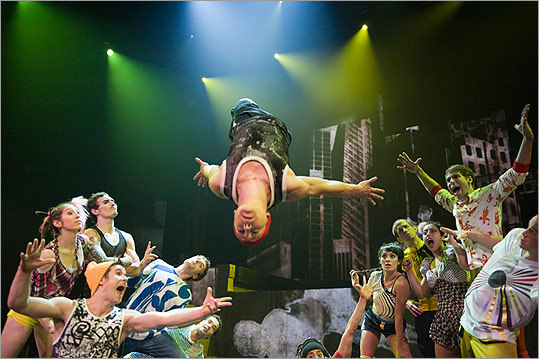 To the screeching of car horns and police sirens, a pair of rival gangs collide in an urban jungle of tenements, back alleys, and construction sites. Two hours later, after a dizzying display of trial biking, Cyr wheeling, contorting, juggling, inline skating, Double Dutch jump-roping (some of it done by the trial biker), aerial exploits, Chinese pole work, and, oh yes, breakdancing, the performers gather on the “trampo-wall,’’ flinging themselves from upper-story doors and windows onto a trampoline below and bouncing back up.

Described by one reviewer as “ ‘West Side Story’ with b-boys and b-girls,’’ “iD’’ is the latest circus spectacular from Montreal, and it’s coming to the Citi Wang Theatre May 10-15. But it’s not the new Cirque du Soleil show. No, iD is the work of that company’s younger, more theatrically minded cousin, Cirque Éloize.

A quick recap: Cirque Éloize was founded in 1993 by seven performers, one being its current CEO and artistic director, Jeannot Painchaud. Éloize (pronounced “el-WAZ’’) is a word used in the Magdalen Islands — an archipelago in the Gulf of St. Lawrence — to mean heat lightning.

The company, with artists from all over the world, has developed seven original shows, presented nearly 4,000 performances in 395 cities in 31 countries. Most of these are proscenium shows, as opposed to Cirque du Soleil’s big-top creations. Also, Cirque du Soleil productions often have clowns and talking; “iD’’ has neither. It’s a pounding urban fable about breakdancers fumbling and rumbling and trying to discover who they are.

Cirque Éloize has played Boston twice before: at the Wilbur Theatre with “Nomade’’ in 2004 and the Cutler Majestic Theatre with “Rain’’ in 2007. But “iD’’ will have the spacious Wang to fill. “It’s a bigger show we have now, with a big set and video projections,’’ Painchaud says on the phone from Montreal. “We made a show that’s different from every show we’ve done before.’’

Video projections? “This is the first show where I really used the video projection as the set. I wanted sketches that are close to cartoons,’’ Painchaud explains. “You go to a different place in the city throughout the whole show. You know that kind of movie where you have a real character in a scene that’s like a cartoon? That’s our scenography.’’

Then there’s that title, which has to do with identity and individuality. “With this show,’’ Painchaud continues, “I wanted to explore the energy of the young people of today. When you are 20 and you express yourself with such extreme dance, you’re expressing your identity and you’re searching for your family, in a way. And on top of everything, it’s a really energetic and acrobatic type of show.’’

But it’s not all nonstop hip-hop. “You cannot be 100 percent energy for two hours. I wanted to create something poetic, as well. The scene with the aerial silks and the guy rollerblading is almost like ‘Romeo and Juliet.’ And then there’s the contortionist meets b-boy, a pas de deux with the two different disciplines.’’

“Romeo and Juliet’’ is a theme here: Chinese pole artist and trampo-wall team captain Fletcher Sanchez played Mercutio in a modern version of the ballet back home in Los Angeles. I ask him about the trampo-wall.

I have to ask about the segment where Thibaut Philippe jumps his trial bike over an audience member. Not a plant, I gather. “No, it’s a volunteer we bring up on stage,’’ Painchaud says. “Thibaut can jump everywhere and stop one centimeter from your nose. It’s quite scary and quite amazing. But this is the kind of skill I wanted in the show. The kids in the street play hard, and they do things that are quite crazy, and he’s one of them, for sure.’’

So, is this a show for the whole family? “Definitely. The average audience is maybe 80 percent adults, but especially in the matinee show it’s full of kids screaming all the time, because it’s really close to them. When you have a mix of acrobats and rollerblading and b-boys and a contortionist, it talks to their generation.’’