The mechanics of chance, radically distilled 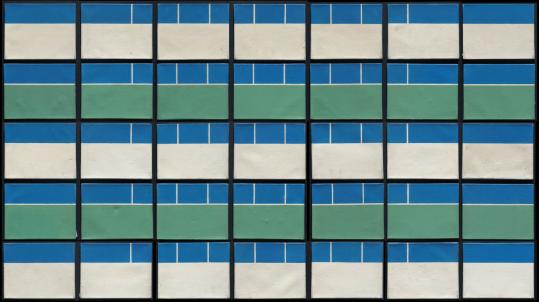 WELLESLEY — Art history, like every other kind of history, is made up as we go along. The moods and prejudices of the time effect what goes on the record.

When people think of postwar art in Boston they tend to think of the so-called Boston Expressionists — artists like Hyman Bloom, Jack Levine, Arthur Polonsky, and David Aronson.

If some of those artists — one thinks of Bloom, in particular — were under-sung, and if their style of art-making (figurative, expressionist, mystical) was largely overtaken by styles sprouting out of New York, this only underscored their identification with Boston: Their left-behind status echoed Boston’s own resentful relationship with the bigger metropolis to the south.

But can we trust such narratives? Was there not much more to the art scene in Boston in the ’40s, ’50s, and ’60s? What sort of impact, for instance, did the area’s sprouting schools have? What did it mean to have students like Cy Twombly and Ellsworth Kelly going through the School of the Museum of Fine Arts, and teachers like Max Beckmann and Philip Guston?

What was the effect of European émigrés like the architect Walter Gropius, or the design theorist György Kepes, who founded the Center for Advanced Visual Studies at Massachusetts Institute of Technology? And weren’t there also modernists, inclined toward abstraction and even minimalism, living and working among the Boston Expressionists, perhaps even befriending them?

Of course there were. And any account of what was going on here that fails to address such questions should be met with suspicion.

Exactly. Coburn, who lives in Gloucester, moved to Boston in 1941, when he was still a teenager. He had come from Miami, where he grew up, to study architecture at MIT.

In those days, writes Rachael Arauz in an essay accompanying a fascinating exhibition, “Ralph Coburn - FRANCE,’’ of Coburn’s early works on paper at David Hall Fine Art in Wellesley, MIT’s architecture students collaborated with art students at the School of the Museum of Fine Arts. Students from the art school might make a mural, for instance, for a space designed by the architecture students.

“I met the kids from the Museum School and they were so much more interesting and more glamorous than the architects that I said, ‘I’ve got to be an artist,’ ’’ Coburn told Eoin Vincent in an online interview last year.

He did — though not immediately. The year was 1944, and Coburn was first called up by the US military. He had problems with his eyesight, so he worked as a draftsman for the Air Force back in Miami. When he returned to Boston in the summer of 1945 he was quick to transfer from MIT to the museum school.

Arauz’s essay, which explains all this, is incredibly important, since Coburn has begun to register in art circles. The Museum of Fine Arts recently acquired one of his works, “Blue, White, Green,’’ and used it prominently in promotional material for the launch of its Art of the Americas Wing. Four smaller collages were displayed in an exhibition highlighting recent acquisitions by the prints and drawings department.

Although Coburn was born in Minneapolis and spent much of his youth in Miami, he is very much the product of the fertile artistic and academic flux that characterized Boston in the ’40s and ’50s. His work from that period, which is abstract and experimental, is worlds away from the mystical and emotional intensity of the Boston Expressionists.

But from Arauz we learn how intimately intertwined the art and academic scenes here were; how Coburn was influenced on the one hand by modernist architects and academics such as Walter Gropius, Marcel Breuer, Bill Brown, Carl Nelson, and Walter Netsch and, on the other, by curators and artists linked with Boston Expressionism — people like Hyman Swetzoff, who worked at the Institute of Modern Art (where Coburn was briefly employed), Boris Mirski (at whose gallery Coburn also worked), and the artists Polonsky, Aronson, and Bloom.

“Coburn felt at home among this group of largely figurative artists,’’ writes Arauz, “and they, too, welcomed his spare, abstract aesthetic in their midst.’’

He was there for much of the time with his close friend, and fellow museum school student, Ellsworth Kelly. Kelly, who is regarded today as one of the world’s greatest living abstract artists, had left for France in the fall of 1948 after completing his degree. After making it through the winter, he wrote to Coburn suggesting he join him in Paris.

Coburn took him up on the offer, and sailed from Boston in May, accompanied by fellow artists Ninon Lacey and Aronson.

Coburn stayed on the outskirts of Paris in a room above his aunt and uncle’s bookstore. “I would usually take the train to Paris every day and would meet Kelly for lunch and we’d go to museums and galleries, and fool around,’’ he told David Hall. There was, he added, “an awful lot of socializing with a lot of friends from Boston.’’

Together, Coburn and Kelly visited Gertrude Stein and Alice B. Toklas — a virtual rite of passage for aspiring American artists in Paris. They visited the studio of Jean Arp in Meudon, where both were impressed not only by Arp’s chance-related collages, but by the work of his late wife, Sophie Taeuber-Arp. They also met up with Merce Cunningham and John Cage (Cage was staying in the same Paris hotel as Kelly).

Coburn spent three winter months in the south of France, where he introduced color to his work, and experimented with collage using a colored gummed paper Kelly had discovered in a Paris shop.

There are several collage drawings in the show, obviously influenced by the visit to Arp, whose “Untitled (Collage with Squares Arranged According to the Laws of Chance)’’ was already in the collection of the Museum of Modern Art in New York. Chance would become an abiding preoccupation both for Coburn and Kelly.

You can see how Coburn made it work in an attractive work from 1950 called “Collage, Arranged by Choice.’’ After dividing up a piece of paper into a grid, he scattered the page with triangles cut from yellow gummed paper. He then cut the paper into thin strips along the grid’s vertical lines, and re-ordered them — by choice rather than by pure chance (he had to like the results).

Other works here are on fairly thin tissue paper. They employ just a few black lines applied with a brush. Some are curved, others are straight, still others swell into various shapes. All of them are radical distillations of things Coburn saw — either out of his window in the Paris suburbs, or in the vicinity of the Seine, or beachside in the south of France.

Like Kelly’s work from the same period, the results are so minimal that we have trouble reading them. In the work called “Beach at Bordrouhant,’’ for instance, it’s impossible to say whether Coburn is giving us a bird’s-eye view or some kind of cut-away. But it doesn’t particularly matter.

Instead, you’re absorbed by his sensitivity to the ways in which black lines carve up space, controlling the size and shape of the white ground, as an architect might carve up space.

There are many other fascinating works in the show — many of them severely distilled, and yet retaining a whiff of romanticism. Several works are based on the motif of the sun rising over the Mediterranean at Sanary, on the Côte d’Azur. Others show, with utmost simplicity, Parisian landscapes and the outlines of the Seine.

This is a small but fascinating show by an artist I feel sure we are going to hear more about in coming years.