An inspired and audacious ‘Chautauqua!’ 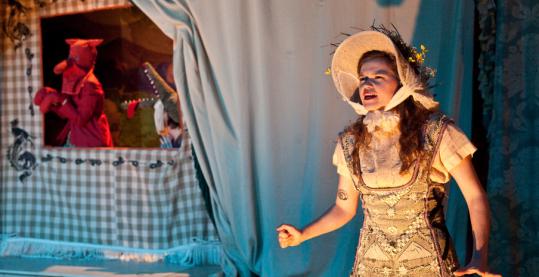 With a demeanor as formal and stiff as his high, old-fashioned collar, Dick Pricey seems the perfect emcee for the sedate history lesson that “Chautauqua!’’ at first shapes up to be.

But by evening’s end . . . well, let’s just say Dick is not wearing that collar anymore, and “Chautauqua!’’ has turned out to be anything but sedate.

This audacious mashup of highbrow, middlebrow, and gleefully lowbrow culture, at the Institute of Contemporary Art through tomorrow, is the creation of a New York-based experimental theater troupe that calls itself (hey, somebody has to) the National Theater of the United States of America.

Cowritten by James Stanley (who plays Dick Pricey) and Normandy Raven Sherwood, “Chautauqua!’’ draws its name and its inspiration from the famous traveling lecture series that began in the late 19th century.

To such ingredients as historical reenactments and folk music, Stanley and Sherwood have added wildly divergent contemporary elements, perpetrating a kind of shotgun marriage between vaudeville and the avante-garde that adds up to a celebration of freedom of expression. Last night’s guest speaker at “Chautauqua!’’ was Neil Miller, author of “Banned in Boston,’’ who spoke about the censorship crusades of the Watch and Ward Society.

There is a reenactment of the 1804 duel between Alexander Hamilton and Aaron Burr, complete with the intriguing claim that duels back then were politely euphemized as “interviews.’’ A wild-eyed cartographer named Tarleton Slocum (Ean Sheehy) delivers a screechy lecture on how maps reveal the way we see ourselves, declaring that capitalism was born when travelers like Marco Polo went in search of ways “to spice up our maggotty salt pork.’’ Sherwood, attired in a fetching bonnet, narrates a show with cardboard cutouts and puppets that takes us on a journey through the food chain: “Lady Paramecium’’ is devoured by a larger microorganism which is then devoured by a frog which is then devoured by a bird.

This, for some reason, gives way to an uproarious folk dance, featuring men in masks, that nearly blows the roof off the joint. There is much more dancing and many more hijinks to come in “Chautauqua!’’, and none of it would please the Watch and Ward Society. But when a guy sitting behind me hollered “Bravo!’’ I thought: Amen.

CHAUTAUQUA! Performance by The National Theater of the United States of America.

At: Institute of Contemporary Art.