A growing sense of wonder 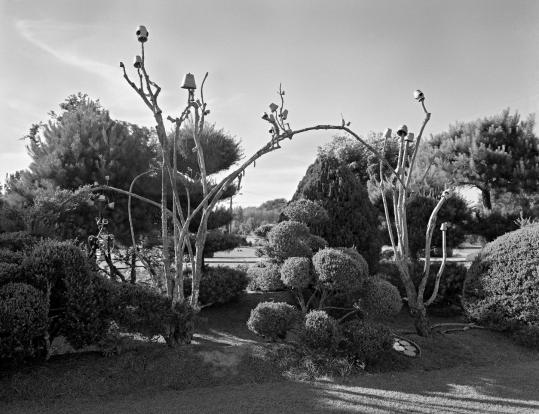 On a visit to Athens, Ga., in 1987, Vaughn Sills found herself looking at a mutual friend’s garden. “Looking’’ isn’t really adequate. In an artist’s statement that accompanies “Places for the Spirit: Traditional African American Gardens — Photographs by Vaughn Sills,’’ she uses the word “entranced.’’

“Something came over me — or through me — as I stood in the garden, looking, feeling, sensing the energy or magic or spirit, call it what you will, that surrounded me.’’ Not surprisingly, Sills took a photograph. That’s what photographers tend to do when presented with a visual feast, in the same way gourmets tend to eat when presented with a gustatory one. That photograph was the first of many, an ongoing series of images Sills has taken of African-Americans’ gardens in the South.

The show, which consists of two-dozen black-and-white photographs, runs through April 22 at Simmons College’s Trustman Gallery. Sills has taught at Simmons since 1993.

The gardens use a particular vernacular, one whose lineage can at least in part be traced back to Africa. Their frequent blend of practicality and playfulness, elegance and funk (one man uses an old toilet bowl and tank as planters), is at once distinctive and deeply appealing.

Sills’s visual approach is austere, and rightly so — since her subjects sure aren’t. It’s a good thing she uses black and white, otherwise her pictures might be overpowering. That’s obviously true of the gardens, which are lush in vegetation (thanks to the climate) and usually exuberant in design (thanks to the imaginativeness of their owners). It’s equally true of the people, whom we see in 11 of the photographs. None is young, at least not in years. Yet each possesses the richly weathered look of long experience. Clearly, these are people with stories to tell.

Sills takes austerity only so far. For starters, her pictures are 16 inches by 19 1/2 inches — nearly square, but not quite. That not-quiteness is fitting. Nature and culture combine in these gardens — nature’s abundance with culture’s order — but the combination is never seamless. Sitting in her rather grand backyard, Inez Faust is dwarfed by the grandest thing in it, a magnificent live oak. Pearl Fryar’s garden, in Bishopville, N.C., includes pots atop pollarded branches. Emma Moore’s yard, in Marion, Ala., incorporates bricks, bottles, battered ironwork, an inner tube, and an upended plastic lawn chair. Plastic flamingos (presumably pink) can be glimpsed in two of the photographs, and a plant-bearing tricycle in another.

Sills, who took these photographs in Georgia, the two Carolinas, Louisiana, and Alabama, includes the location in each title. How could she not, these images are so idiosyncratically — so wondrously — specific. That said, they also convey a sense of being beyond place — and outside of time. Humanity, the Bible says, started in a garden. Looking at these photographs, one can see how it continues in gardens, too.