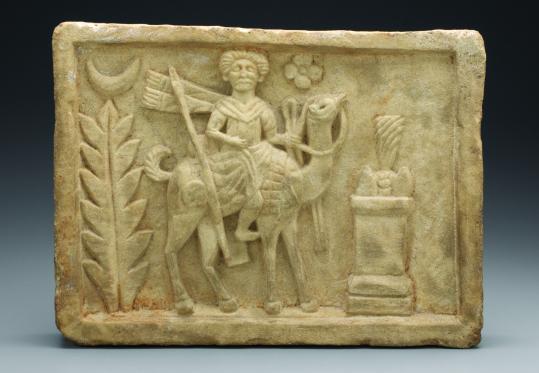 A limestone panel from the temple of Adonis at Dura-Europos is on view in an exhibit at Boston College’s McMullen Museum of Art. (Yale University Art Gallery)
By Sebastian Smee Globe Staff / March 25, 2011

Dura-Europos, an ancient city on the Euphrates River, had everything you’d expect to find in a mid-sized city on an important trading route. It had brothels, markets, military barracks, fortifications, and places of worship.

There were, no doubt, days in the city’s life when all this seemed intricately interconnected — when, for instance, a soldier wandered from his post by the city gates to the shop of a merchant to buy a present for a favored prostitute, before adjourning to the temple.

But ever since this ancient city was rediscovered by British troops in 1920, scholars have been less interested in this interconnectedness (which is, and always has been, typical of all cities) than in discreet aspects of life in Dura-Europos. In particular, they have focused on its places of worship.

There are good reasons for this.

Situated roughly halfway between Damascus and Baghdad, Dura-Europos was founded about 300 years before the birth of Christ. It came to an abrupt end after it was sacked by Sasanians in 256 AD. It does not appear to have been the most important of cities during this period. But it took on great significance in its afterlife as an archeological site.

Why? Because a series of excavating campaigns sponsored by Yale University and the French Académie des Inscriptions et Belles-Lettres in the 1920s and ’30s uncovered several extraordinary sites. One of them is a Jewish synagogue richly painted with biblical scenes: It surprised everybody because there is usually a prohibition against figurative imagery in Judaism.

Another site revealed the earliest known Christian baptistery, situated in the earliest surviving Christian house church. And a third discovery was a temple of the ancient cult of Mithraism, a cult so secretive that scarcely anything is known about it.

Since the city housed a Roman garrison and was sacked after a military siege, it was also a boon to military historians, who have made great discoveries.

It’s not hard to see, then, why scholars specializing in Jewish studies, early Christian studies, or ancient civilizations were agog, and why the scholarship sprouting from the discovery of Dura-Europos tended to divide and splinter into these specialist areas.

“Dura-Europos: Crossroads of Antiquity,’’ a fascinating exhibition at the McMullen Museum of Art at Boston College, is an attempt to glue all this scholarship together. The show, organized by Yale University’s Lisa Brody and Boston College’s Gail Hoffman, is an attempt to display the full spectrum of archeologists’ discoveries at Dura-Europos, from military shields to children’s shoes, and from engagement rings to divorce decrees.

The accompanying catalog collects essays by 18 different scholars, addressing everything from “the articulation of sacred space’’ to “latrine culture’’ (a burgeoning field, it turns out).

The 12,000 objects from Dura-Europos that came to the United States during excavations in the 1920s and ’30s are prized holdings at the Yale University Art Gallery. But most have been in storage since the last exhibition about Dura-Europos 30 years ago. That exhibition did much to foster interest in the objects, with the result that a few of them remained on display until the gallery closed for renovations in 2003. Others were lent out; painted ceiling tiles from the synagogue, for instance, were borrowed by the Jewish Museum in New York.

Plans for a permanent installation about Dura-Europos at Yale are currently in the works. But the gallery’s latest renovation won’t be completed until 2012, so Brody had the chance to team up with Hoffman and the McMullen to stage this exhibition.

The resulting show includes 75 objects, displayed over the museum’s two floors. The top floor is dedicated to beautifully designed partial reconstructions of the three places of worship — the synagogue, the Christian house church, and the Mithraeum — as well as to objects relating to the military.

One of these is a Sasanian helmet, a weather-beaten but still fearsome looking thing, whose design was later adapted by the Roman military. There is also a painted semi-cylindrical shield, or scutum, that was used by Roman legionaries. It was discovered broken into 13 pieces. Much of the resulting reconstruction is modern. Still, it has long been one of the most famous objects to emerge from the site. Literary sources describe such shields. But this one, painted red with Roman iconography including lions, eagles, and laurel wreaths, is the only one that has ever been found.

The niches devoted to the places of worship are captivating. It is amazing, for instance, to see a painting that shows the divine figures of Mithras and Sol dining together after Mithras had slain the bull — foundational events in Mithraism. Evidence uncovered at the site suggests that members of the cult, which was popular in the Roman military between the first and fourth centuries AD, would have reenacted the banquet, perhaps as part of an initiation ceremony.

Likewise, the Christian building, which would have been indistinguishable from other residential houses on the same street (Christians kept a low profile) included paintings of Christ healing the paralytic and walking on water. The style of rendering is primitive, but all the more affecting for being so. When you consider the date and the all-round precariousness of Christianity at the time, it is difficult not to be moved.

The baptistery had only been in use for a few years before the fatal Sasanian attack. As the city prepared for the onslaught, it was filled with rubble to bolster the nearby city walls. Ironically, this partial burial is what preserved the paintings over 16 centuries.

The synagogue, also built into a converted house, had been around much longer. Its large assembly room was lined with paintings that show the Exodus from Egypt, the Ark, the sacrifice of Elijah, and so on.

The original paintings are in the collection of the National Museum in Damascus; displayed here are the full-scale copies made by the archeologist Herbert Gute in the 1930s.

All this is fascinating, and more. But it’s really only when you hit the lower floor of the exhibition that you begin to get a more holistic sense of life in Dura-Europos.

It was a trading city. Archeologists have uncovered inscriptions in as many as nine languages, from Latin, Hebrew, and Greek, to Syriac, Aramaic, and Safaitic (a language used by Arab nomads).

Many of the objects on display are from the city’s pagan shrines, which, unlike the places of worship described upstairs, would have been open to all residents. A great commingling of deities and iconography resulted. Greek gods such as Zeus, Herakles, and Aphrodite, for instance, appear in the same temples as Syrian gods, and in some cases take on their characteristics. Indeed, almost every object is congested with evidence of multiple cultures.

After it was taken by the Sasanians, Dura-Europos was briefly occupied and then abandoned. It was not so much covered in lava and ash, as happened at Pompeii, but in sand and silence.

Finally, it is starting to speak up.