‘Educating Rita’ a study in craft, wit, and heart 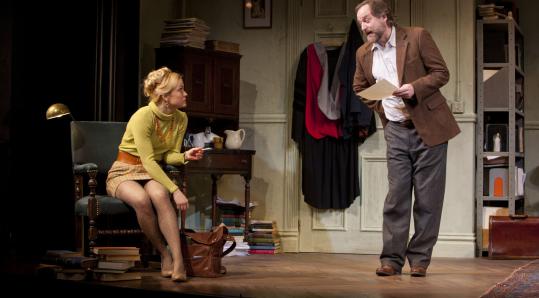 It helps that the cast consists of Jane Pfitsch and Andrew Long. Part of the enjoyment is in watching what these two bring out of each other. (T. Charles Erickson)
By Don Aucoin Globe Staff / March 18, 2011

Near the beginning of the second act in the Huntington Theatre Company’s production of “Educating Rita,’’ the effervescent title character struggles to open a window in the musty office of her curmudgeonly professor. “Y’need air in here, Frank,’’ she tells him. “The room needs airing.’’

There’s nothing subtle about the metaphor or the play that contains it. But that doesn’t make “Educating Rita’’ any less beguiling.

There was reason for concern when the Huntington announced that its 2010/2011 season would feature two plays that had already been made into well-known movies: William Inge’s “Bus Stop’’ and Willy Russell’s “Educating Rita.’’ In his whirligig of a production last September, director Nicholas Martin amped up the energy level of “Bus Stop,’’ the better to conceal the play’s weaknesses. In her streamlined production of “Rita,’’ director Maria Aitken has the more pleasurable task of revealing the play’s surprising strengths.

Sure, “Rita’’ is a safe choice in some ways, an old-fashioned crowd-pleaser. Yes, it sometimes rides the predictable rhythms of a TV sitcom. But this play has craft and wit and heart, and moments of piercing truth, too. “Educating Rita’’ is about something that matters: the deep hunger for knowledge and the quest for an identity, built on that knowledge, that can transcend social circumstances. Aitken, who directed “Alfred Hitchcock’s The 39 Steps’’ at the Huntington before it began its Broadway run, never loses sight of that fact.

It helps enormously that Aitken’s two-member cast consists of Jane Pfitsch and Andrew Long. Part of the enjoyment of “Educating Rita’’ is in watching what these two skilled actors bring out of each other.

When Rita bursts into Frank’s office for the first time, invading his ivory tower, she is wearing a bright orange sweater, a short skirt, and knee-high boots, with her blond hair piled on her head, like a British version of Reese Witherspoon’s Elle in “Legally Blonde.’’ A 26-year-old hairdresser who is married to a lunkhead, Rita is determined to widen her horizons and escape her spirit-stifling life.

Toward that end, she has enrolled at a university in the north of England, where her tutor turns out to be Frank, a drunken, embittered professor and onetime poet who is fast approaching burnout. Bearded and bearish, with bleary eyes and unkempt hair, Frank sits in an office that, as designed by Allen Moyer with just the right aura of clutter barely held at bay, seems as weary as the man.

“There’s loads I don’t know,’’ Rita announces to Frank. He asks: “And you want to know everything?’’ She replies: “Yeah.’’ She isn’t kidding.

Thus begins a complicated relationship. But at first, Frank resists. Rita wants to learn; he just wants to drink, and to disappear by degrees. She won’t let him. If Rita needs to be taught, Frank needs to be saved.

He is intrigued by her spontaneity. Her reactions to literature come straight from the gut; for instance, she despises E.M. Forster because, she says, Forster didn’t care about the poor. Frank tells her that scholarship and literary criticism must be divorced from emotion. “It’s a game with rules, and you must observe those rules,’’ he says.

However, when Rita learns those rules, the balance of power between them begins to shift. She begins to challenge him and possibly outgrow him, an evolution deftly conveyed in a scene where Frank instructs her to read a poem by William Blake, and Rita — now attired in a stylish beret and fashionable mauve boots — puts the book down and recites it from memory. The pride in her face meets the ambivalence in his; they have to establish a new modus vivendi.

Yet this production doesn’t shortchange the laughs in “Rita.’’ There’s a reason it won the Olivier Award for Best New Comedy in 1980 before being adapted into a successful 1983 film starring Michael Caine and Julie Walters. Pfitsch, who studied in the Brown University/Trinity Rep MFA program, is an antic delight, consistently finding fresh ways to bring a comic fizz to the proceedings.

Long, a member of the Shakespeare Theatre Company in Washington, D.C., keeps “Educating Rita’’ grounded while displaying expert timing and a gift for the double-take. (His aghast look when Rita proposes they see an amateur production of “The Importance of Being Earnest’’ is priceless). From beginning to end, he reminds us that this play could just as well be titled “Educating Frank.’’