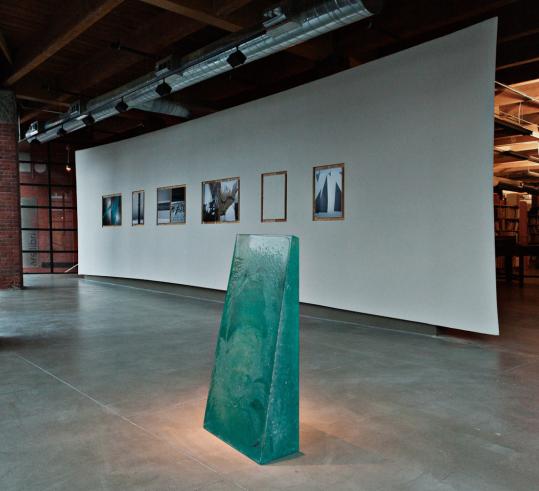 At Ars Libri, Gregory Vershbow and Wilson Lawrence have collaborated on “Picturing Wall-Drawings,’’ in which Lawrence’s sculptures are portrayed in Vershbow’s photos.
By Cate McQuaid Globe Correspondent / March 16, 2011

Sculpture and photography don’t usually marry well, other than for purely documentary purposes. But photographer Gregory Vershbow and sculptor Wilson Lawrence have collaborated on a fine-tuned project, “Picturing Wall-Drawings,’’ up at Ars Libri.

“I make drawings,’’ Lawrence says in his artist’s statement. His sculptures sport a draftsman’s focus on surface and gesture. He employs shadow and translucent materials so that lines and light pass through objects and become architectural. Texture plays a vital role, too, similar to cross-hatching, smudging, and coloration on a page. Vershbow brings his own eye to Lawrence’s pieces, homing in with a narrow focus on small details, which he blows up to evoke larger worlds. You won’t get a picture of the whole object from Vershbow’s portrayal, but you’ll get the essence of it, and the photographer’s own, poetic expression of what he sees.

Look at Lawrence’s “Ablation.’’ A wedge of blue glass narrows as it rises from the floor. One side has portions frosted like ice. The sunlight pours through it, highlighting textures. In Vershbow’s diptych depicting it, “Dreamscape #3,’’ one panel details a sharp-focused upper corner, with a fog of blue glass falling below it; the other captures a slanting expanse that rivets the eye to a small passage of rutted texture in the center of a misty blue plane. The photos draw out the sculpture’s leanness, color, texture, and translucence.

I saw Vershbow’s “Topographic #1’’ before I saw its subject, Lawrence’s “2nd perspective.’’ One panel of the photographic diptych features a soft, shadow-strewn sand formation rippling below a steely canopy — a space I imagined I could enter. In the other, the space flattens into a spiked black pattern against a black-and-white diamond pattern.

The sculpture, a square of white-painted tin ceiling suspended on the wall behind a square of steel-link fencing, surprised me. I had seen the gritty tin ceiling as sand. Vershbow captured two variations on Lawrence’s elegant “drawing’’: the play of the steel grid’s shadows over the lumpy texture of the ceiling panel, and the pattern-on-pattern of the grid over its own shadow.

Both artists received their master’s degrees at Massachusetts College of Art and Design last year. I’ve seen Vershbow’s work before; he’s created dense, almost novelistic photographic narratives that seem downright gabby compared with the singular focus of his work here. No doubt Lawrence’s Zen-like approach to his sculptures, recognizing the richness of detail and its gestural possibility in a simple construction, has helped to hone his collaborator’s vision.

Playing with food It’s all food and fun at Beth Urdang Gallery, where two salient prints by Pop masters Claes Oldenburg (“Cup of Joe With Donut’’) and Roy Lichtenstein (“Sandwich and Soda’’) launch an exhibit of contemporary art in the same vein. Mary Ellen Johnson’s mouth-watering oil painting “Big Blueberry Cheesecake’’ is a remarkable feat — from a distance it looks almost photo-realist, but up close it’s a painterly whorl of smudgy, glistening blues, whites, yellows, and red.

Not everything in the show is gastronomic. Michele Bonelli’s crisp abstractions look as if Lichtenstein has had a go at Mondrian: To grids, she adds swoops and circles and a decidedly off-balance sensibility in a mostly red, black, white, and yellow palette.

Ben Matthews paints his own old-timey signage, both nostalgic and comic. “Alco-Apple’’ features a wholesome red apple on a scuffed blue ground. The apple, the sign tells us, is infused with alcohol. “Nutritious and fun!’’ Tom Pfannerstill updates Andy Warhol by offering wooden sculptures of branded cups, such as “KFC Cup,’’ only they are smashed and dirty, portraits of litter the artist has come across. Pop goes the landfill.

Narratives in color “Recently I’ve wanted to paint everything white,’’ says Carol McMahon in her artist’s statement. For her exhibit at Bromfield Gallery, McMahon tore old canvases off their stretcher bars and painted the bars white. She painted her collection of old Victorian scrapbooks, found objects, furniture, and more. It’s a whitewash. When she adds little quirks of color, the objects are invigorated into something new.

“Not Snow White #2,’’ full of sass, is a chunk of white-painted wood protruding from the wall, with a fluffy lavender pompom adorning the outer edge. That pompom suggests a nose, girlishness, and a fresh start. “Blackie and Green Stamps Book’’ features a pert stuffed terrier coated in white with its feet on an old bound book, not painted, and labeled “Green Stamps.’’ The juxtaposition of white with color sets up a pleasing tension; the white both purifies and masks the objects; the color suggests some new truth seeping to the surface.

Also at Bromfield, Barbara Poole, better known as a narrative painter, has installed a daunting jungle of felt. There are lichens, ivies, and towering plants in all kinds of green, a bench covered with soft green pods, and livid purple blossoms. Poole has splendidly overrun the gallery, but her point is political: Invasive species change the environment. I don’t know that the installation succeeds in making that point (although sections of an accompanying graphic novel by Poole and her son, Ian, do); it could be simply a lush rain forest.

CAROL MCMAHON: The Age of Un-Reason