Telling vivid stories with a paintbrush

Exhibit traces the development of Philip Guston’s sojourn in Rome 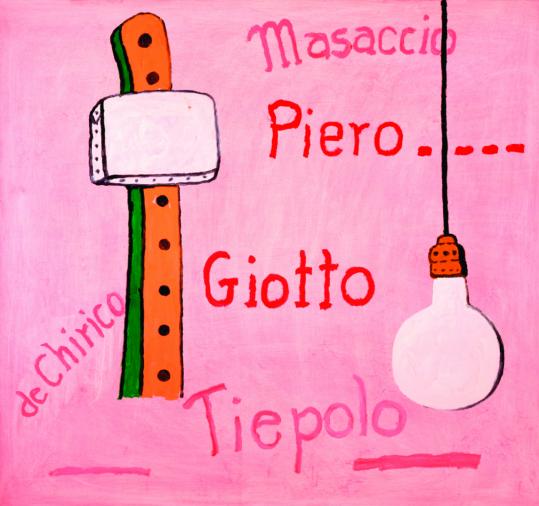 WASHINGTON, D.C. — Philip Guston was the most important artist to have a significant connection with Boston since Max Beckmann.

The claim may sound strange: Neither Guston, the New York School painter who died in 1980, nor Beckmann, the German Expressionist who died in 1950, was born in Boston nor spent more than a tiny fraction of their lives here.

And yet both men taught here — Beckmann briefly at the School of the Museum of Fine Arts, and Guston at Boston University in the 1970s. In both cases their impact was such that whole generations of artists, both resident in these parts and passing through, were inspired by them, learned from them, and continue to talk about them in reverent tones.

“Philip Guston, Roma,’’ a revelatory show at the Phillips Collection in Washington, D.C., displays the 39 small paintings Guston made on a trip to Rome in 1970-71.

The dates are important. The place is, too.

In 1970, Guston had shown recent work at New York’s Marlborough Gallery. The exhibition’s effect — first on local critics (many of whom trashed it), later on the wider art world — was akin to a shuddering tremor that opened up a major fault line.

Guston was already, at that time, famous. Although he had started out as a politically motivated muralist, he had, since the 1950s, won acclaim as a painter of excruciatingly sensitive abstractions — trembling conglomerations of cross-hatched brushstrokes that evoked gaseous accumulations and aqueous reflections.

He was talked about in the same breath as Jackson Pollock, Willem de Kooning, and Mark Rothko. His personal manner was dubbed “Abstract Impressionism,’’ and his paintings found their way into the collections of major museums.

None of the 33 paintings and eight drawings Guston showed at Marlborough in 1970 was abstract. Instead, they showed cartoon-like figures with Ku Klux Klan-like hoods, pointing fingers or holding cigarettes, sometimes crowded into cars on the outskirts of cities. Other paintings showed hanging light bulbs, clocks, piles of shoes, planks with nails.

All these were crudely outlined, and often shadowed with darker shapes to signify (rather than actually evoke) three-dimensionality. They were clumsy. There was something raucous, threatening, and comedic about them — a goofiness that opened out onto a philosophical comedy charged with private doubts and reckonings.

Critics and collectors who had championed Guston as a leading figure of abstract expressionism — the movement that had, in the minds of many, established America’s ascendancy in postwar culture — were shocked. Many — though they later recanted — felt betrayed. (The most notorious review, by Hilton Kramer in The New York Times, was unforgettably titled: “A Mandarin Pretending to be a Stumblebum.’’)

Wounded, Guston fled to Rome. He had been offered a residency at the American Academy. For a period he was disconsolate. He spent a lot of time with a fellow resident, John Hersey, the Pulitzer Prize-winning writer famous for his 1946 New Yorker article “Hiroshima.’’ The two men discussed the Vietnam War, the nuclear threat, global strife — none of it exactly mood-enhancing.

On the other hand, Guston was in Rome. And after a glowing review of the Marlborough show by the New Yorker art critic Harold Rosenberg finally came through, his spirits lifted and he resumed painting.

The wonder of the Phillips Collection show is that the works in it are so intimate and, seemingly, relaxed. Yes, we see Guston re-engaging with the dark, demented imagery that had, for several years, been winding its way into his imagination — the hoods, brick walls, shoes, open books, and light bulbs. But at the same time, he is painting, with palpable passion, the things he sees about him — ancient sculptures, fountains, topiary, and Tuscan hilltop towns.

It was Guston’s third trip to Italy. He loved the place — its food, its way of life, its collisions of ancient inheritance and contemporary strife, the films of Fellini and Pasolini, the landscape, the formal gardens, the monuments and rubble.

Moreover, most of his favorite painters were Italian, and had been since his teenage years. He was especially fond of sturdy, volumetric Renaissance masters like Masaccio, Uccello, Giotto, and, above all, Piero della Francesca.

“He is so remote from other masters,’’ he wrote. “A different fervor, grave and delicate, moves in the daylight of his pictures. Without our familiar passions, he is like a visitor to the earth, reflecting on distances, gravity, and positions of essential forms.’’

One of the largest, most eye-catching pictures in the show (it was painted two years after his return) is called “Pantheon.’’ Against a flat ground in Guston’s (and Tiepolo’s?) signature pink, it shows a small canvas on an easel, a dangling light bulb, and the names of five Italian artists in Guston’s own personal pantheon: Masaccio, Piero, Giotto, Tiepolo, and, off to one side, de Chirico, that modern master of ancient enigma. (Guston first saw two paintings by de Chirico in the private collection of Walter and Louise Arensberg, and later credited the experience with making him resolve to be a painter).

Enigma. The distances between things. The gravity and positions of essential forms: All these come through as preoccupations in the “Roma’’ works.

Specific motifs, too, can be connected with particular works Guston encountered in Italy. He was struck by, for instance, a foot from an Egyptian sculpture fragment in the Via S. Stefano del Cacco; a hooded figure from Piero’s “Madonna of Mercy’’; a hand holding a whip from his “Flagellation’’; and a pointing hand from Caravaggio’s “The Calling of St Matthew.’’

All these motifs had already appeared in Guston’s work, so it was a question of reinforcement, rather than direct inspiration. But the links are real, and it’s fun to speculate about them. (For those who cannot travel to see the show, the catalog, with essays by curator Peter Benson Miller, Dore Ashton, and Michael Semff, and excerpts from the journals of Musa McKim, Guston’s wife, is both indispensable and a visual delight).

Overall, the show conveys a sense of what it is like to invent, to carve out new freedoms, to forge new languages under duress — not just the duress of critical disapprobation, but the larger duress of operating in the shadow of past artistic glories.

Of course, that particular challenge has been faced by every artist who has tried to paint or sculpt in Rome, from Michelangelo to Cy Twombly. Guston met it with guts and aplomb.

Just as Max Beckmann’s brief connection with Boston, near the end of his life, was cemented by his close friendship with MFA director Perry Rathbone, Guston’s connections with Boston were likewise sealed by friendship. During the last 10 years of his life – years that saw him drag painting away from the purist rhetoric of abstraction toward impure modes of storytelling, allegory, and figuration – he spent less and less time with fellow artists and more time with writers and poets.

Boston’s William Corbett was one of these poets. He and his wife, Beverly, frequently hosted Guston in their Columbus Square home and stayed at Guston’s studio in Woodstock, N.Y. (Corbett’s “Philip Guston’s Late Work: A Memoir’’ is one of several brilliant memoirs about the painter.)

In the meantime, when not painting, Guston kept busy teaching his BU students.

Unlike the Phillips Collection, which first acquired a Guston painting in 1958 and worked with him on a show of his late works just prior to his death in 1980, Boston’s major museums have been (not uncharacteristically) slow off the mark when it comes to acknowledging Guston’s importance.

Harvard honored him with an important show in 2000. But the MFA’s neglect of this towering figure is an ongoing embarrassment. It owns just six lithographs and a vast but crashingly limp painting, “The Deluge.’’ (The latter was a gift from Guston’s widow.)

There’s no other sign that the MFA has ever had the first idea of Guston’s importance.