THIS STORY HAS BEEN FORMATTED FOR EASY PRINTING
The Week Ahead 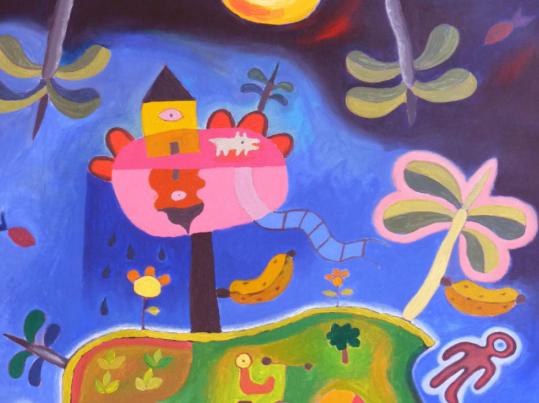 Comic look at the big picture
LUIS RODRÍGUEZ (NOA) The Cuban artist known as NOA uses irony and humor to probe existential questions. He populates his drawings, paintings, and sculptures with comic characters and symbols. NOA is in town for Friday’s opening and an artist’s talk on Sunday at 1 p.m. Pictured: a detail of “Prosperity,’’ an oil on canvas. Through April 17. Galería Cubana, 460 Harrison Ave. 617-292-2822, www.lagaleriacubana.com
(GaleríA Cubana)
March 10, 2011

DOLLHOUSE Director Bridget Kathleen O’Leary’s decision to cast against type, with Sara Newhouse as a surprisingly strong Nora and Will Lyman a remarkably sympathetic Evan, makes Theresa Rebeck’s adaptation of Henrik Ibsen’s classic more about a communication breakdown than a simple battle of the sexes. Through March 20 at New Repertory Theatre, at Arsenal Center for the Arts. 617-923-8487, www.newrep.org

MY WONDERFUL DAY Director David J. Miller mines the farcical elements of Alan Ayckbourn’s farce for maximum hilarity while not losing sight of the undercurrent of melancholy embedded within a poignant story of innocence lost. Through March 26. Presented by Zeitgeist Stage Company at Black Box Theatre, Boston Center for the Arts. 617-933-8600, www.bostontheatrescene.com TERRY BYRNE

MARY POPPINS Steffanie Leigh reigns serene as the magical nanny in the touring production of the current Broadway hit. Funny, touching, and dazzling by turns, this Cameron Mackintosh musical makes a proper treat for the entire family. Through March 20. Presented by Broadway Across America at Boston Opera House. 800-982-2787, www.broadwayacrossamerica.com/boston

PHILADANCO Celebrating its 40th anniversary, this energetic Philadelphia troupe blends African-American dance with ballet, jazz, and modern. In this World Music/CRASHarts presentation, the company’s program includes the Boston premiere of “By Way of the Funk,’’ a new work by Urban Bush Women’s Jawole Willa Jo Zollar set to the music of Funkadelic and Parliament. March 11-13. $40. Institute of Contemporary Art/Boston. 617-876-4275, www.worldmusic.org

BURN THE FLOOR Straight from Broadway, this Latin and ballroom dance extravaganza brings together 20 acclaimed dancers (including five alums from TV’s “So You Think You Can Dance’’). The show has toured more than 30 countries with its glitzy re-creation of popular dance’s evolution, from hot Harlem nights at The Savoy to the steamy dances of the Latin Quarter. Presented by Broadway Across America. March 8-13. $22-$77. Colonial Theatre. 1-800-982-2787, www.broadwayacrossamerica.com/boston

ISRAEL FOLKDANCE FESTIVAL 24 dance groups featuring performers of all ages from around the country will descend on MIT this weekend for the 35th consecutive festival of traditional and modern Israeli folk dance. An Israeli marketplace in the lobby from 1-3 p.m. will offer arts, crafts, and Judaica. March 13, 3 p.m. $5-$15. Kresge Auditorium, Cambridge. www.bostonfestival.org

BOSTON YOUTH MOVES Few things are more motivating to teen performers than other teen performers, and the pre-professional dancers of this young troupe have all the right moves in repertoire ranging from street dance and tap to ballet and modern dance. This one just may inspire the grown-ups as well. March 12-13. $20-$25. Boston University Dance Theatre. 617-358-2500, www.bostonyouthmoves.org

DAVID MAISEL: HISTORY’S SHADOW The photographer took archival X-rays of museum objects, such as a Buddha from the Asian Art Museum in San Francisco, laid them on a light box, and exposed them to color film. His ghostly images reveal the art inside and out. Through April 12. Miller Block Gallery, 38 Newbury St. 617-536-4650, www.millerblockgallery.com

ANDREW MOWBRAY: IN SEARCH OF Mowbray, a sculptor and conceptual artist, has fashioned objects to predict the future and understand the present, devices of luck and chance that bring into question the role and powers of an artist. Through April 9. LaMontagne Gallery, 555 East 2nd St., South Boston. 617-464-4640, www.lamontagnegallery.com

CHRIS BALLANTYNE: JUST IN CASE Ballantyne’s deserted landscapes on paper and panel explore flatness and fluidity — words that can be applied to both his images and his astringent approach to painting itself. Through April 16. Steven Zevitas Gallery, 450 Harrison Ave. 617-778-5265, www.stevenzevitasgallery.com

DURA-EUROPOS: CROSSROADS OF ANTIQUITY Roman artifacts excavated in the 1920s and ’30s from the ancient city of Dura-Europos in the Syrian desert. Through June 5. McMullen Museum of Art. 617-552-8100, www.bc.edu/bc_org/avp/cas/artmuseum