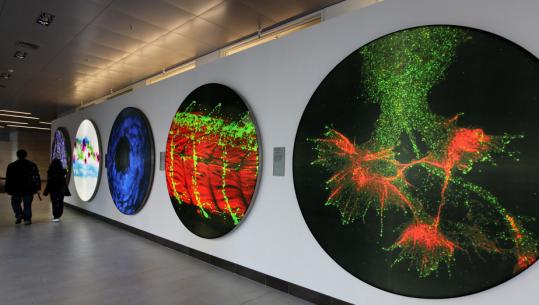 “These are windows into what we do,’’ said Robert Urban, executive director of the Koch, which will be dedicated today. “These are a storefront. You can imagine what’s going on here by looking through that window.’’

The window, which faces Main Street, is 90 yards long. The location is a nexus of research in the life sciences. On the other side of the street from the Koch (pronounced “coke’’) are MIT’s Whitehead Institute for Biomedical Research and the Eli and Edythe L. Broad Institute of Harvard and MIT.

Behind the Koch window is a first-floor gallery with 4,000 square feet of display space. The 10 microscope images aren’t the only items on exhibit. Others include a timeline of achievements in engineering and science at MIT; a mosaic map of Kendall Square; a video display of people talking about cancer — patients, as well as researchers and clinicians; kiosks with interactive animation about cancer research; and a 40-foot mural showing pathways of cancer cells and how they mutate. The mural resembles a canvas by Abstract Expressionist painter Roberto Matta.

Still, what’s most eye-catching are those big pictures, which have been printed on fabric placed over lightboxes. The backlit illumination brings out the images’ colors with especial richness and clarity. One picture captures a blood vessel’s receptors responding to a protein. Another shows drugs, seen as red dots, crossing the membrane of a nerve cell.

Viewed at this scale, the images become objects of aesthetic as well as scientific wonder.

“MIT has a longstanding interest generally in the interface among science, technology, and art,’’ said John Durant, director of the MIT Museum. Durant helped advise the institute on organizing the display space.

Harold “Doc’’ Edgerton, a fixture at MIT for more than six decades, revolutionized stroboscopic photography. Berenice Abbott, one of the most celebrated photographers of the 20th century, worked with MIT faculty in the late 1950s on illustrating basic principles of physics. The Koch images extend that tradition.

Durant said that the enlarged images speak to current developments in science even as they express their own unique beauty. “So much of contemporary biomedical science is being conducted at the microscopic or even molecular level, and those things are very hard to portray in an exhibition,’’ Durant said.

“Researchers are making more and more use of new visualizing technologies. What’s been going on with digital photography is just incredible. So many of the researchers have been working with technologies to make their work visual for them, and this also serves a purpose of public display. Furthermore, a lot of these images are stunningly beautiful. They look like abstract contemporary art. Maybe they are abstract contemporary art.’’

The gallery design is a collaboration between by Biber Architects and the design firm Pentagram. James Biber, the chief architect, said the design posed two major obstacles. “One is that ‘cancer’ is maybe the scariest word in the English,’’ he said. “So part of the challenge was defusing the understandable fear the word raises for most people.

“The other is that this is an extremely complex and esoteric and highly scientific set of research principles. Making the work both understandable to the public and acceptable to the researchers so that they don’t think it’s dumbed-down, that’s not a simple thing.’’

That’s where the giant images come in: They simultaneously demonstrate reassuring beauty and arresting complexity.

A competition will be held every six months to select images for display. For the inaugural exhibition, there were nearly 100 submissions. “It happens that these 10 images are all microscope images, but the contest was open to all kinds of scientific imagery,’’ said Alex Fiorentino, the Koch’s exhibition designer. “Lots of scientists have these beautiful things sitting on a computer waiting to be used in an engaging, educational way.’’

One of the competition winners was F. John Burpo, an Army lieutenant colonel and researcher in the Koch’s Biomolecular Materials Laboratory. He took the image with an electron microscope. It shows a material made by genetically engineered viruses. It looks like a ghostly gray coral reef.

“My image was the last to be emplaced and much to my excitement I finally saw it this afternoon,’’ Burpo said in an e-mail. “The large format almost makes it seem like you are walking around the structure at the micro- and nano-scale.’’

Another competition winner was Michele Balsamo. Balsamo, from the University of Rome, is a postdoctoral associate in the institute’s Gertler Lab. He submitted an image of a breast cancer cell metastasizing into a lung.

“It’s very cool that the Koch Institute has something like this,’’ Balsamo said. “It’s very nice for us [researchers], but also for the people walking down the street. They can see what we do. It’s very important because it shows people we are not really those scientists that you see in movies. We do real things that can be translated into something really helpful and useful in the future.’’

The art of the Koch Institute